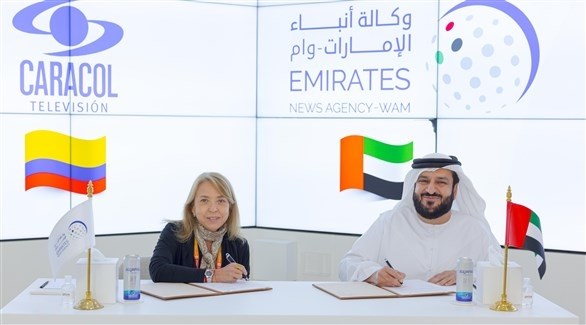 The Emirates News Agency (WAM) signed today, Monday, 5 new agreements for media cooperation and news sharing with major media institutions, TV channels and radio stations in Latin America, as part of the strengthening media efforts to convey the UAE’s humanitarian and civilized message to countries around the world and in multiple languages.

The deals are a continuation of Emirates News Agency’s efforts to strengthen relationships with international media institutions and enhance its presence as a trusted multilingual media provider around the world, as the number of deals signed by WAM during Expo 2020 Dubai has reached more than 19 global agreements.

The agreements are aimed at strengthening professional media cooperation between the UAE News Agency “WAM” and international media organizations and television channels in the field of news and media content sharing, and establish friendship and sustainable cooperation between media institutions of the UAE and Latin American countries. serve the common interests in accordance with the regulations and laws in force in the countries that are the object of the agreements.

Under the agreements, all parties exchange daily news in English, Spanish, Portuguese and Arabic, images and videos for the purpose of using and distributing them on the platforms of these media organizations and their partners around the world, in addition to using these materials in their newsletters and distribute them to their various media outlets in these countries.

In accordance with the agreements, the Emirates News Agency, WAM, obtains news materials, videos and photos from media institutions and television channels for use and distribution on the media platforms of the agency and its partners in various Languages.

Mohammed Jalal Al Raisi stressed that the conclusion of these important agreements with the main media organizations in Latin America at the Expo 2020 Dubai venue carries important connotations that clearly embody the great success achieved by the most important cultural and civilized event in the Emirates. United Arab Emirates in promoting international cooperation in various fields and sectors, especially the media, which contributes to promoting civilizational and cultural rapprochement among peoples worldwide.

He said: “The cooperation with international media institutions falls within the framework of the strategy of the Emirates News Agency, WAM, and the expansion of its geographical reach throughout the world, with the aim of conveying the civilized message from the UAE to the peoples of the world at large, and enhance the soft power of the UAE through a trusted and influential media sector capable of keeping pace with global developments in a professional and high-efficiency manner.

He noted that the success of Expo 2020 Dubai in dazzling the world reflects the visions and directives of wise and strong leadership and the effectiveness of the UAE’s strategies to foresee the future with the help of its loyal sons and to create a more prosperous and sustainable future. based on creativity, innovation and the possession of tools for the future in a way that enhances the process of sustainable development towards fifty new years of achievements and leadership.

Al Raisi expressed his aspiration for the participation of the Latin American media in the World Media Congress, which will be organized by Abu Dhabi in its first session next November, to participate in shaping the future of the global media sector through alliances effective international transfers from the United Arab Emirates. To the whole world

For their part, officials from media institutions and television channels in Latin America stressed that strengthening media cooperation with the Emirates News Agency “WAM” allows their institutions to benefit from the economic, development and humanitarian activity of the Emirates. the UAE on the international scene as it is a pivotal center in global decision-making with its international influence and trust In addition to its global initiatives, achievements and projects that contribute to enhancing global stability and prosperity in line with its values ​​and principles established to achieve peace, tolerance and human solidarity among human beings.

They expressed their great admiration for the exceptional successes achieved by the UAE during the global hosting at Expo 2020 Dubai over a continuous 6-month period of work and effort and for achieving achievements based on international cooperation in meeting challenges and developing innovative solutions. for them. which embodies the high potential of the UAE to host major world events.

They said: “The UAE, with the impressive success of Expo 2020 Dubai, is today writing a new chapter of global leadership, adding to its track record as we look forward to seeing a new Emirati initiative and project that will benefit all.” . humanity.”

They expressed their welcome and desire to participate in the World Media Congress, to be hosted by Abu Dhabi next November, to help advance international efforts, support global trends, and participate in creating an exceptional model of cooperation. global media capable of promoting the process of sustainable development throughout the world for a brilliant independence of all peoples and societies.

- Advertisement -
Share
Facebook
Twitter
Pinterest
WhatsApp
Previous articleFirst Lady of Colombia at Government Summit: Women are the basis of change and progress
Next articleHealth Minister Lauterbach rejects countries: they themselves have to establish stricter rules on the coronavirus