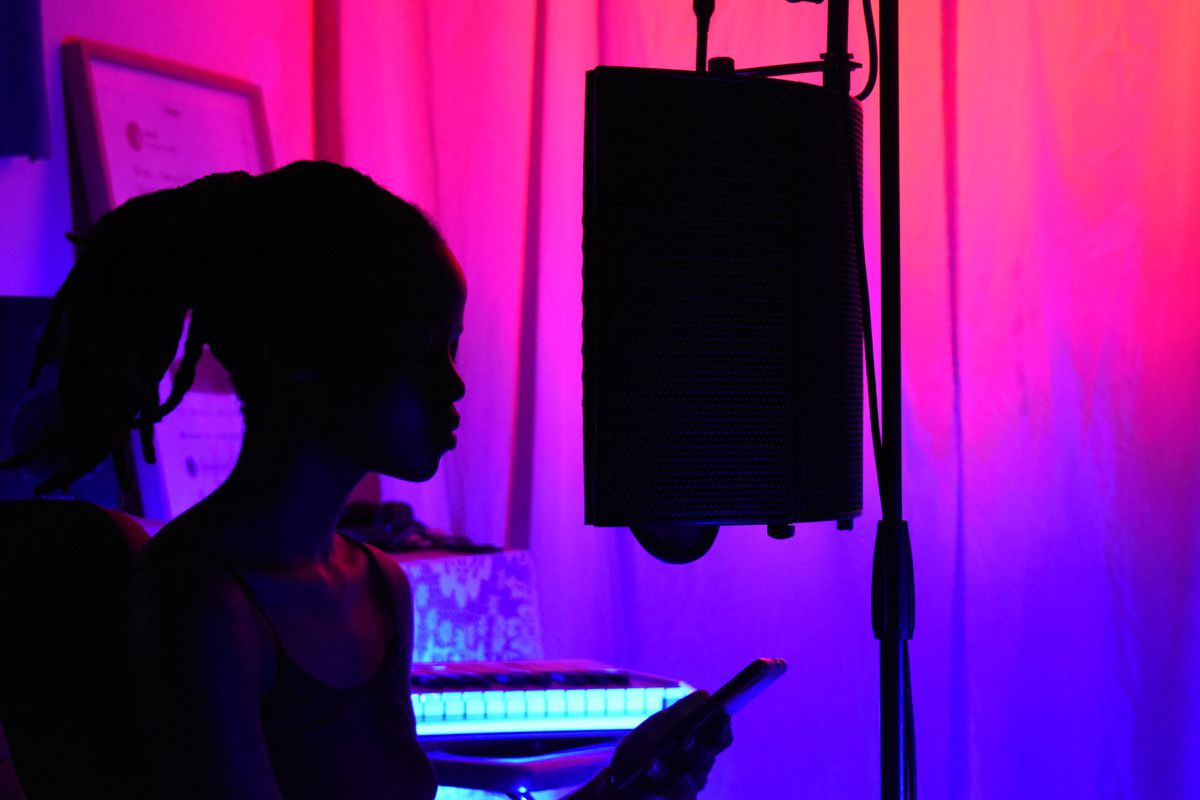 Richard Craig is a physiologist and teaches biomedical sciences at Shenandoah University (Virginia). Also, he’s bald. A trait I wouldn’t highlight unless Craig uses it himself in a TED talk. “I’m bald, but what I miss isn’t my hair, it’s going to the hairdresser.” From there, the professor narrates the ritual of his childhood and adolescence, which began with going to the head wash, where a hairdresser sat him down, put a towel on his shoulders and painstakingly washed his hair with a cranial massage that washed his hair a “luminous tingling sensation” in the center of his head, down his neck, reached his spine and left him in a deep state of relaxation.

Professor Craig experienced Autonomous Sensory Meridian Response (ASMR) but did not know it at the time. In fact, this very pleasant tingling sensation that starts in the center of the head in response to the touch of hands, but also to noises, sighs, and gentle and rhythmic tapping, has not been named that or anything else. In those years, Craig also could not imagine that ASMR would be the topic that would support his academic research. The only thing he could prove was his overexpenditure on haircuts. I was one of those people who pays the barber even if they don’t need a haircut.

It was 2013 when Craig first heard about ASMR, a term coined by Jennifer Allen in 2010 after an epic forum discussion. steadyhealth.com. At the time, there was no reliable study on the subject. Today, Professor Craig maintains one of the largest ASMR databases in the world (consisting of 25,000 people), which has enabled him to review his experiences, sometimes spontaneous as at the hairdresser’s and others through video and audio ad hoc, is shared by people from 130 countries. In many cases, the triggers are repetitive, although they are very different. But be careful, it’s not democratic fun: some will never experience ASMR, for a reason experts say has to do with the availability of oxytocin, also known as the pleasure hormone.

“It is important to distinguish the physiological and emotional response to specific sensory stimuli, ASMR, from the content designed to trigger them,” he says claudia nader, an audio engineer who graduated from the University of York in 2019, who is now researching the impact of ASMR on well-being for her PhD. “Until now, scientific studies have provided physiometric and anecdotal evidence that there is a significant reduction in heart rate during and after exposure to audiovisual content with common ASMR stimuli, suggesting that the viewer is relaxing. However, the physiological response is complex, since although a reduction in heart rate is observed, there is also an increase in skin conductivity or perspiration, which can be related to stress but also to positive sensations such as euphoria,” he explains via email.

Claudia refers to the first investigation on ASMR, published in the scientific journal Peer J and signed by Emma Barratt, a psychology student at Swansea University, and her professor Dr. Nick Davis. This was a descriptive study in which 500 ASMR enthusiasts shared their experiences. Davis confirmed to this newspaper by e-mail that interest in the topic had multiplied since then: “Several articles appear every month,” he says and recommends one released just four weeks ago, confirming the reduction in heart rate and some brain changes.

For Nick Davis, ASMR is “a state of relaxation.” “In our first work on this topic, Emma Barrat and I found that people used ASMR-inducing content to relieve stress and relax before bedtime.” They also described the most common triggers of this pleasurable response: sighs (75%) , personal attention (69%), creaking noises (64%) and slow movements (53%). 34% of participants reported that their ASMR was often triggered by watching repetitive tasks. Davis acknowledges that little is known about what happens in the brain when viewing or listening to ASMR-inducing content. “There are few studies, but it appears that the brainwaves associated with relaxation are increased.”

Agnieszca Janic McErlean, a psychologist at the University of Bath Spa and one of the pioneering researchers in the field, also shares the results of several neuroimaging studies during ASMR experiences via email. For example, functional connectivity found atypical between brain areas involved in sensory processing and attentional control and increased activity in areas of the brain related to processing emotions. “These results suggest that people who experience ASMR process information related to sensations and emotions differently,” explains the scientist.

Professor Richard Craig founded it ASMR Universityat which the first study who scanned what happens in the brain during an ASMR experience. “The images show the specific areas of the brain that are activated and in some regions the most likely involvement of oxytocin stands out, the behaviors that trigger the release of this hormone are similar to those produced in ASMR. We know that oxytocin stimulates feelings of relaxation and comfort that are very similar to those described by ASMR patients,” says the professor, who also produces the podcast sleep whispers.

The studies revealed something that younger users and a burgeoning industry focused on inducing ASMR through sights and sounds had been researching for years: those whispers, squeaks, ringing intimacy, a brush running over dry skin, the crackling of burning wood or tapping fingernails Hitting a smooth surface to relax can induce sleep and relieve anxiety. At least for some people. Figures for the ASMR category on Twitch show that between January and September 2021, it was the only one to show consistent growth on the platform. Of the four million hours watched in January, there were only 12 million in September of the same year.

Before going to bed, Andrea CG slows things down with a visit to the library at Hogwarts, Harry Potter’s paradise. This is one of the most popular themes of immersive videos that recreate audiovisual landscapes designed to trigger ASMR and can be found on the YouTube channel ASMR rooms. The picture is warm, the fireplace is lit and the firewood crackles, the pages of the books turn by themselves, making a soft, very pleasant sound, the tearing of a quill writing on an old parchment can be heard. It’s raining outside. Andrea is fried after the first 10 minutes.

These ambient videos experienced their special explosion during the pandemic. Curiously, the demand then also demanded sounds and images that would remind us of our earlier lives in the midst of isolation: the sonic chaos of the New York subway or the hustle and bustle of a subway cooperation. Certainly, the well-being generated was closer to confidence than pure ASMR, but the experts surveyed also acknowledge that we are not all relaxed in the same way. Agnieska Janin has noted in her work that in addition to the usual ASMR triggers (whispering, personal attention, gentle touches, etc.) there are unexpected ones that can even be uncomfortable: “Many find mouth sounds, such as eating and eating, to be uncomfortable, we have found that trigger ASMR in some people,” says the researcher.

The ASMR-inducing audiovisual industry, which includes videos, Spotify playlists and meditation apps, forms a category that some have dubbed ddgital wellness and others, like researcher Helle Breth Klausen of Aarhus University in Denmark, as “means of self-medication ” describe.

It’s difficult to put numbers on the digital wellbeing business. According to the business portal Bloomberg, some are podcaster of Spotify would make $17,000 a month just to produce white noise (White noise), a flat force that triggers ASMR in some people and is very popular for putting babies to sleep. The roar of sea waves or the sounds of an African jungle are often classified as white noise.

“There is a lot of misinformation on the internet regarding the terminology of sound with different coloratura,” warns Claudia Nader, who acknowledges that a lot of content is tagged with #.White noise on the Internet, and that does not correspond to the technical specifications: “A combination of all frequencies between 20Hz and 20kHz that are audible to humans, with the same amplitude. Since this information is very specific, it stands to reason that Internet users associate similar sounds, for example rain or a waterfall, with white noise,” explains the audio specialist.

“Because ASMR can be induced as an experience, both real-world sounds and digital audiovisual content can be created ad hoc, The stimuli may or may not be designed to evoke this sensation. This is not to say that intentional stimuli produce ASMR in everyone. The same sound stimulus can induce ASMR in some and cause misophonia (an adverse reaction to certain sounds that can cause fear and anger in the affected individual) in others.”

Richard Craig acknowledges that “a lot of content on the web that is labeled ‘ASMR’, even if it is relaxing, is not and relates to some types of music and nature sounds. “But real ASMR content revolves around the positive, personal attention that a human offers. The characteristics of the video should include a pleasant voice, soft sounds and some deliberate movement,” he explains.

Davis sees no point in paying for an ASMR experience: “It’s a very beneficial state of mind that has no side effects, but for most people triggers are free and I don’t think the experience will improve because of money.” is spent on it. We should always be suspicious when too much hype is given to a wellness experience,” he warns. And now that we have learned how to relax on the Internet without paying, please hold back and don’t play the content at twice the speed.