Art, admiration, respect and love of music: What to learn from Patti Smith and Bob Dylan’s relationship 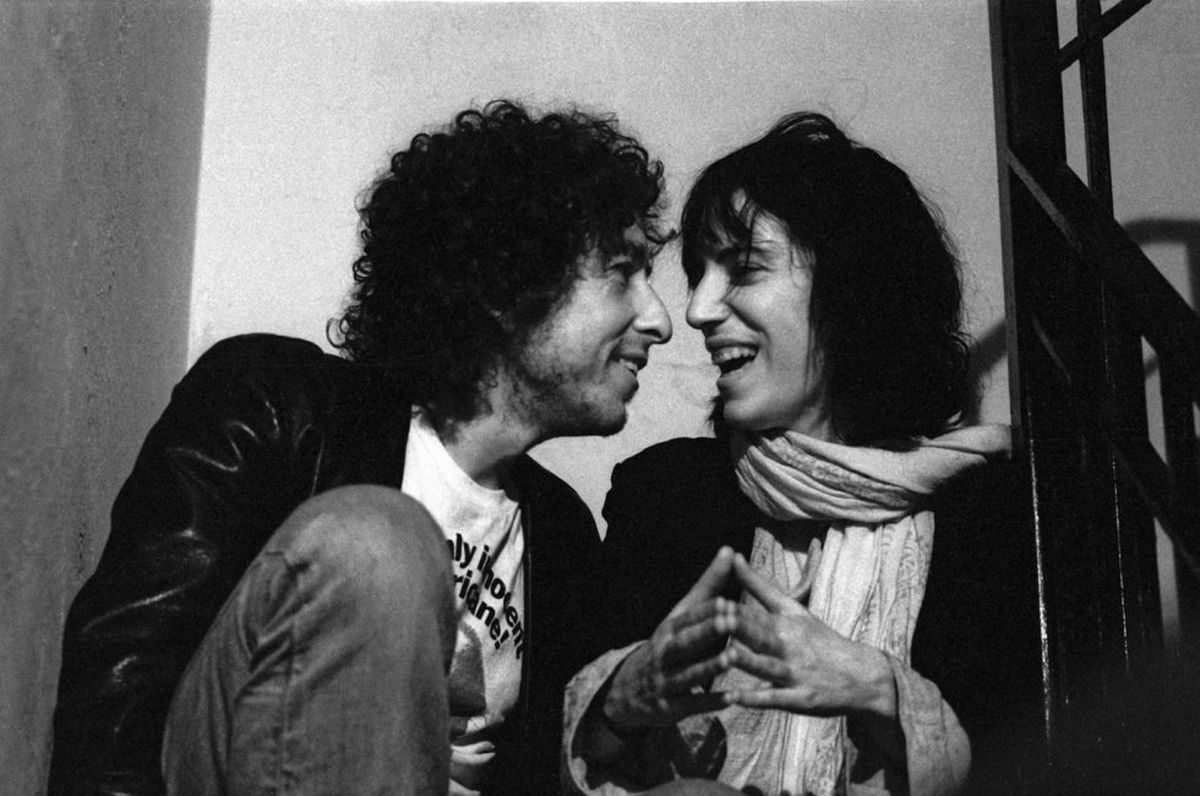 Patti Smith and Bob Dylan have known each other since 1975, and their strong friendship is arguably an example of something bigger than the world we live in every day. Greatness, as a word that retains all its deep meaning and not as a cliché, is always complex, and it is already well known that the complex in a world ruled by the empire of capital, post-truth and the noise of social networks. Complexity is always the enemy of ignorance.

Patti Smith has just offered some fabulous concerts in Spain reminding us that her character in the Rock’n’Roll it’s also something bigger than what we’re used to on stage. Concerts where he also rediscovers songs by his friend Bob, so simple and emotional one morning too many composed by a very young Dylan who recently came to New York in the early 1960’s. That Bob Dylan, who left everything in Minnesota to meet an ailing Woody Guthrie and start his recording career in Greenwich Village, was the example that a very young Patti Smith had when she left everything in New Jersey and village also moved to Greenwich.

Bob and Patti are two examples of two people dedicated to the cause of music. Two people resolutely pursuing what they believed in, an area very different from that pushed by their family circles, friends and ultimately a whole society. They pursued it and they succeeded: they entered the territory of art. Both lived not only as musicians, but also became two great ambassadors of this territory, which in our time, where culture and humanities become more irrelevant every year and are so damaged by all sorts of interests, social mechanics and bad thoughts.

The matter is so serious that only the last example I have met in my life is enough: the student who obtained the highest mark in selectivity in the Autonomous Community of Madrid has chosen to study classical philology by vocation study, and was showered with derogatory and critical comments on social networks before making his decision. The boy said that his choice was based on the fact that studying this profession makes him happy and they threw him out because he is not an engineer, prosecutor, banker or anything else profitable in this world we live in .

Patti and Bob also inhabit our world, although they seem to be from another world and, as Dylan admitted in his last interview on his latest album, have been released The New York Times, he is aware that his world was “obsolete”. Not only are their worlds dated and both are characters from another time, but what they represent hardly matters these days. They are a commitment to the art of music and a profession that, at its core, has more to do with the value of the sung word than with the big screens and pyrotechnics of a big festival. Their friendship therefore also represents something more transcendent than many can imagine.

Patti and Bob met in 1975 when the musician visited her after a concert at The Bitter End, a club in New York. She, a 29-year-old poet involved in the Rock’n’Roll, was the big sensation of New York, where punk hatched, and at 34 he was the big star of the counterculture, ditching everything of his own free will. As Patti occasionally recalled, it was an unfortunate encounter. Bob, who couldn’t be seen at a function or event across town, walked into the dressing room and asked, “Are there any poets here?” And she replied, “I hate poetry!” Many decades later, Patti herself admitted, that she acted like a high school girl who really likes a boy she admires, and when he approaches her to talk to her, she pretends not to be interested.

As many musicians have also recognized, Patti has said that the physical Dylan can never be separated from the mythical Dylan. The person and the legend merge into a being that, out of his conscience and arrogance, shows gestures, movements and silences that always have a strange and final power. That played a trick on her. Still, Bob, hurrying through a crowd in that dressing room, took it easy and didn’t think much of it either. Days later, the pair were photographed laughing at a private party, and she even teased him to keep out of the way if they wanted to take a picture together. The photo was taken spontaneously and authentically.

Since then, something important happened between them: they admired each other. It’s tough being friends with Bob Dylan when he’s such an elusive character for everyone, including those closest to him, but Patti Smith pulled it off. In those early years of friendship, Patti said she would take Dylan for walks around New York, aimlessly commenting on all sorts of things as they walked. And something you learn more or less soon in this life, and if you’re not an orangutan, is that chatting with someone while walking connects more than a good fuck. Patti and Bob became very close.

In 1994 Patti lost her husband Fred sound Smith, a former member of the MC5 band, and shortly thereafter his brother. Patti fell into depression. There are things to remember: Patti gave up songwriting and much of her life as an artist in the 80’s and 90’s to devote herself to family life with Fred and raising their two children. Even when Fred and his brother died, she was struck by the death of her other great love, Robert Mapplethorpe, in 1989, lover, partner, friend, confidant and everything one could dream of in a person during those years of giving up everything to live in New York following the example of Bob Dylan, as she herself explained in detail and lovingly we were childrena delightful book that took 10 years to write.

One day, in the midst of depression, Patti received a phone call. It was Bob Dylan. He called his friend to accompany him to a series of concerts across the United States. I always fondly remember this story with my friend Rafa Cervera, a great music critic and admirer of Patti Smith. who already has this extraordinary relationship between two myths of Rock’n’Roll. As she herself realized, Bob was the only one who could convince her to go back on stage. In this way, Patti Smith accompanied Bob for seven nights in 1995 and they sang one of his songs together every night. Dark eyes. A song with these verses: “I live in a world where life and death are remembered…I don’t care for this game where beauty is ignored.” In addition to returning to a stage, Patti got active with life. He began to compose and above all to write volumes of poetry, memoirs and essays. Eventually he came back and did it with a force of the seas. And Bob continued alone, on his endless tour, on his outdated records, on his mystery.

In 2016, Bob Dylan won the Nobel Prize in Literature and the world of letters was turned upside down. Men of letters, writers and letter-writers of all stripes rushed out to appeal the unfair and absurd decision. Troy was burning and the great majority of the world of literary culture was offended to award a puppeteer the most valuable, promotional and coveted award. Those were pathetic and hilariously fun days, especially when it was confirmed that the Nobel Committee, that mothball-smelling body mired in sex scandals, didn’t know the true nature of the winner: Bob Dylan wasn’t a writer aspiring to win awards . But what would the members of the Swedish Academy know if they were looking for publicity. It has proven once again that this is the first or at most the second time that someone who calls himself a writer knows something about music, about the music that Dylan and Patti Smith represent.

In 2016, when it seemed like Dylan had come into the world with his writing to change it (and it seems he’s accomplished a little more with her books than the vast majority of writers), he continued to act like Bob Dylan before anyone else in this world. He has done nothing that is expected of him or anyone. He went about his business like a puppeteer and showman Rock’n’Roll. But he also did the same thing for what’s really important to him: He asked Patti Smith to sing for him at the awards ceremony. a brown one? Maybe for the calculators, but not for them. The gesture, considered foolish by the same cultural world that had put the award in heaven and hell, preserved the honor of the code Patti and Bob shared.

Patti sang A Hard Rain’s A Gonna Fall, one of the first compositions he learned from Dylan as a teenager, and he was moved. He stumbled over his feelings and his words and had to stop the song to repeat it again in front of the whole world. The cynics saw a pose, many others a plain old and nervous woman, many others did not understand anything, and perhaps a handful of lunatics saw the maximum beauty of a unique friendship. Also the maximum beauty of the art of music, this art of oral tradition that is shared. In an article in New Yorker, Patti Smith recalled what happened with these words: “I was forced to stop and apologize. Then, in that state, I tried again and sang with all my heart, still stumbling. I couldn’t help noticing what Bob did for me and so many musicians and that the song’s narration begins with the words “I stumbled past twelve misty mountains”. And it ends with the verse: “And I will know my song well before I start singing”. As I sat down, I felt the humiliating pang of failure, but also the strange realization that somehow I had stepped into the world of letters and really lived in it.”

If Dylan’s literature, and therefore his music, meant something, even if Bob Dylan meant something as a symbol, it was perfectly represented in Patti Smith. Those nerves and that heartbreaking song were bigger than the best speeches. I imagine this would be hard to understand for writers who see the RAE Academy as a more sacred place than what is held, for example, in a circle of villagers clapping and singing traditional songs.

Patti and Bob’s friendship continues to this day, but our days have nothing to do with them and what they stand for. The world we live in is hostile and moves too fast. It’s a world where there is a tragic deficit in poetry and beauty walks through advertising campaigns. The same world that tells this talented boy not to waste his time studying classical philology. The same world that Patti and Bob confronted with their songs, two soulmates, one soul in the service of art, something bigger than the reality they want us to live.