Arruabarina: “I am no stranger to Emirates football” 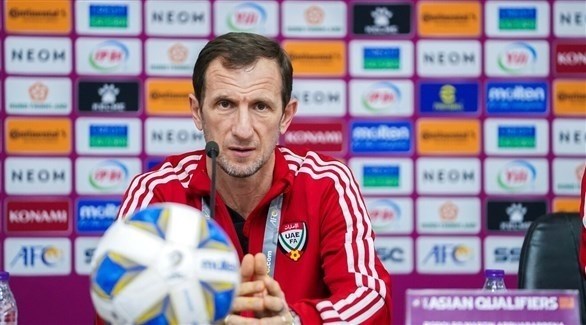 The coach of the Emirates national team, the Argentine Rodolfo Arruabarina, confirmed that “Al-Abyad” is going through a critical moment, as he entered his camp to prepare for the match against Iraq, as part of the matches on the penultimate day of the qualifiers Asian. for the 2022 World Cup, which will be held tomorrow, Thursday, at the King Fahd International Stadium in Riyadh.

Rodolfo pointed out that “Al-Abyad” will be ready for that match, and the coaching staff was concerned with preparing the players to give their best, and also demanded that they present themselves distinctively and perform their best during the match. next confrontation, and continued: “During the camp, we got acquainted with several new players. For those who joined the national team, we are working step by step according to a clear vision for each stage separately, and I got to know the capabilities of all the players during that training period.

He continued: “It is true that we met some new players, but I am aware of the capabilities of most of the players in the UAE league and the national team, and I see that they all have high ambitions to win the match, and to settle the third place in favor of the United Arab Emirates team”, this was known during the press conference, which took place today, Wednesday, at the King Fahd International Stadium in Riyadh.

And about what is expected from the coaching staff to face the game, given the expected difficulty of the upcoming confrontation, since he takes charge for the first time, and if he will play for a draw that is enough to get closer to the final classification before of facing South Korea at the end of the qualifiers, he said: “I am not a stranger in Emirates football, I know a lot of players in the national team and therefore it did not take long for the players. know our training philosophy, and what we want on the field, and our goal now is to provide a full and worthy performance that restores confidence to the fans and the team in general, whose motto is to play for victory, this will be our slogan against Iraq first, and then we’ll see what the rest of the qualifiers can end up with.”