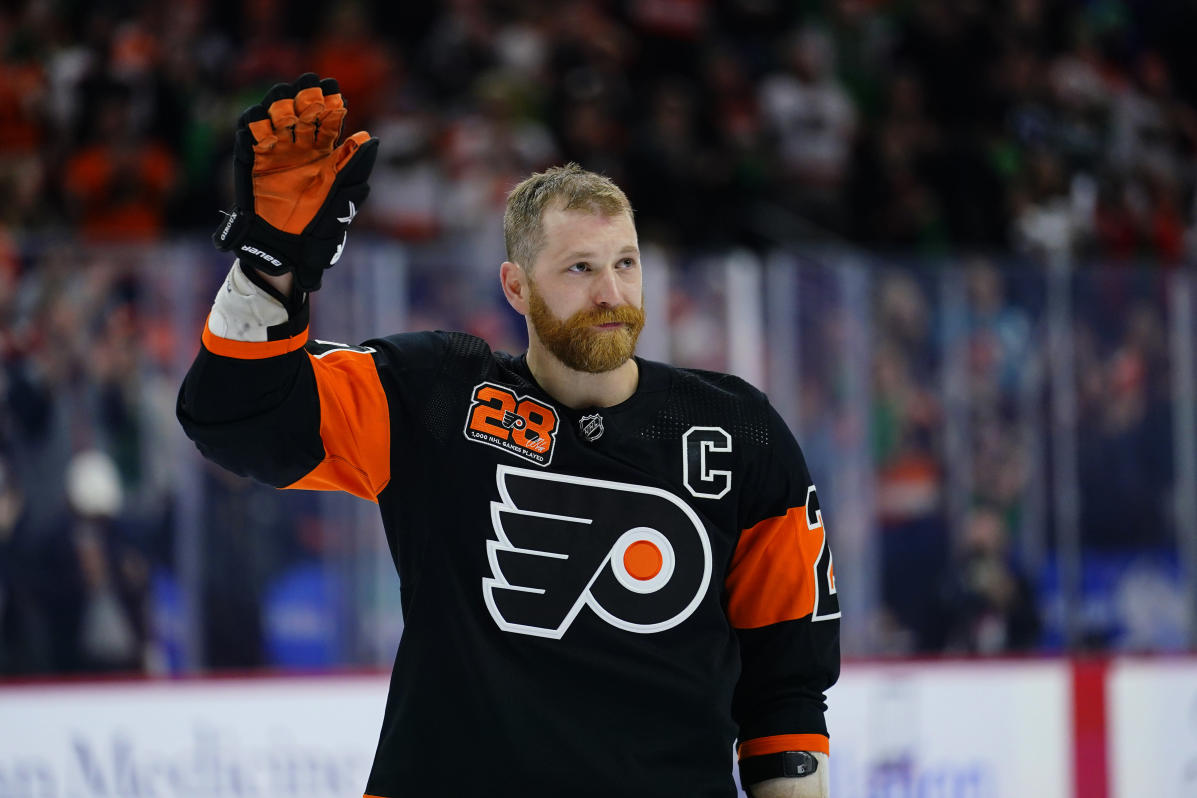 The Philadelphia Flyers traded Giroux after he played in his 1,000th career game with the franchise to the Florida Panthers, a person familiar with the deal told The Associated Press.

The person spoke to the AP on condition of anonymity on Saturday because the trade had not been announced.

The move strengthens Florida’s status as a Stanley Cup contender, giving Aleksander Barkov an elite linemate and one of the best matchup aces in the NHL. The Panthers earlier in the week traded a first-round pick and more for Montreal defenseman Ben Chiarot.

Giroux was traded after he played in his 1,000th game with the Flyers and was feted Thursday with a game in his honor. A first-round draft pick in 2006, Giroux made his Philadelphia debut on Feb. 19, 2008 and has played his entire career with the Flyers. He has 900 career points and is eighth on the Flyers’ career list with 291 goals. He helped the Flyers reach the 2010 Stanley Cup Final and was awarded this season’s All-Star MVP.

Giroux had to waive his no-move clause that was part of his eight-year, $66.2 million contract.

He joined Hall of Famer and two-time Stanley Cup champion Bobby Clarke as the only players to reach 1,000 games in their entirety with the Flyers. Giroux was named captain on January 15, 2013.

The Flyers have just 19 wins and are tied for last place in the Metropolitan Division.

It’s the second major trade for Florida as the deadline approaches, after the Panthers acquired Chiarot.

The defenseman is expected to join Florida next week when the Panthers play in Montreal. That is also likely to be Giroux’s debut for his new club.

It’s another clear sign that Florida is determined to finally reverse its fortunes. The Panthers reached the Stanley Cup Final in 1996, the franchise’s third season.

They haven’t won a playoff series since, going through more than a dozen coaches, going from one rebuild to another, often playing to an empty arena and haunted by rumors for years that they were leaving Florida.

But this is better than ever for the Panthers, who have the second-best record in the NHL going into Saturday, have a Hart Trophy contender in Jonathan Huberdeau, half a dozen 20-goal scorers this season already and an elite player in Barkov. locked up for seven more years.

Plus, the Panthers have survived a lot of adversity this season.

The team saw Joel Quenneville resign as coach seven games unbeaten into the season as part of the fallout from the Chicago Blackhawks scandal involving an abused player, something that happened when Quenneville coached there more than a decade ago. And on Friday, the team watched top defenseman Aaron Ekblad crawl to the bench in agony after sustaining a lower leg injury in Anaheim. But by the end of the night, the team already had enough information to believe that Ekblad dodged the kind of major injury that likely would have ended his season and dented Florida’s title hopes.

The Flyers have been out of championship contention for a long time. But Giroux’s 1,000th game was a rare occasion to celebrate in Philadelphia. Clarke presented Giroux with the silver club to commemorate the occasion, and his teammates gave him a Rolex watch and the NHL gave him a crystal. Giroux has also played in 85 career playoff games for Philadelphia.

“The fans and the organization, my teammates have been so good to me for so many years and that’s one of the reasons it was so emotional after the game,” Giroux said.

- Advertisement -
Share
Facebook
Twitter
Pinterest
WhatsApp
Previous articleWorld Cup qualifiers.. The victim of the Egyptian national team roster embarrasses Queiroz with 12 goals
Next articleA message for the Algerian team. What did Ben Nasser say after his exceptional goal for Milan?