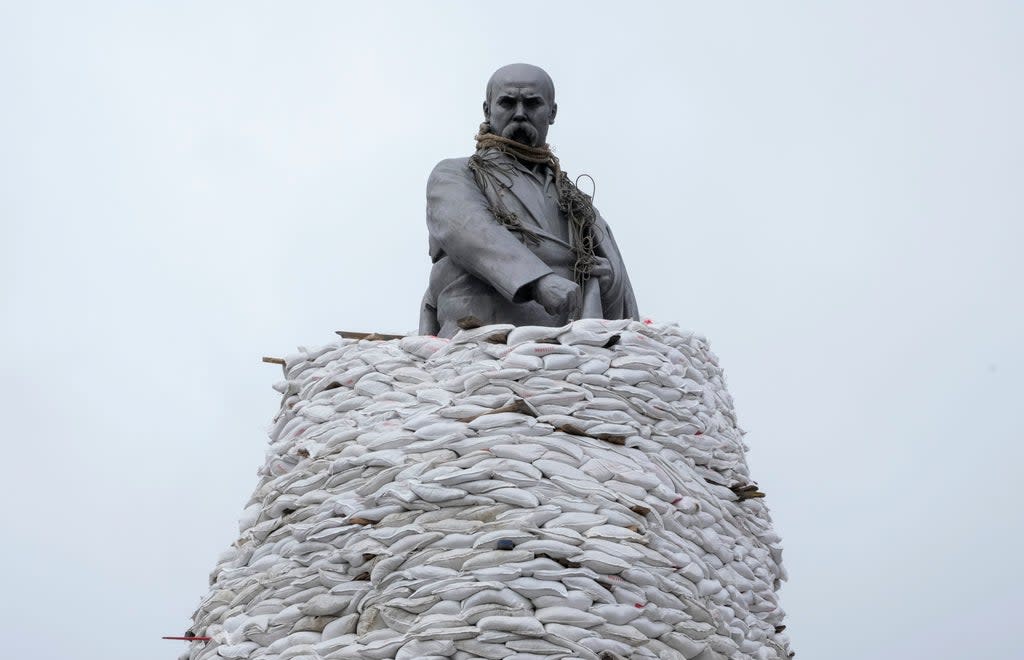 A 16-meter-high bronze monument to Taras Shevchenko, a national hero in Ukraine, survived World War II. The Ukrainians have protected him with countless layers of sandbags in the hope that he, too, will survive the Russian attacks.

Shevchenko’s right arm is outstretched, clenched into a fist at the end, while he holds the folds of his garments with his other hand. The monument in Kharkiv, Ukraine’s second largest city, is one of many signs of Ukrainian resolve that has endured for 32 days.

In another part of the country, on a battle-damaged store, the words “Glory to Ukraine” are written alongside graffiti depicting Russian President Vladimir Putin.

Images captured by The Associated Press also show lonely walks among damaged buildings, piles of rubble and bullet-riddled vehicles. Others show collective mourning on both sides.

Five men bending over a grave in Yuzhne, Ukraine’s Odessa region, use a rope to lower a coffin containing the remains of Ukrainian military officer Oleksiy Lunyov to the ground. Dozens watch, including one with his hands folded in front of him and his head bowed, and another ready with a shovel of dirt to fill the grave of the man killed during a Russian missile attack.

In another photo taken in Kara-Balta, west of Bishkek, Kyrgyzstan, a mother wearing a blue floral headscarf clutches a handkerchief and cries during a farewell ceremony for her son, Russian army soldier Rustam Zarifulin.