Anti-Semitic controversy at the Documenta: A mural with figures insulting Jews is covered with black cloth 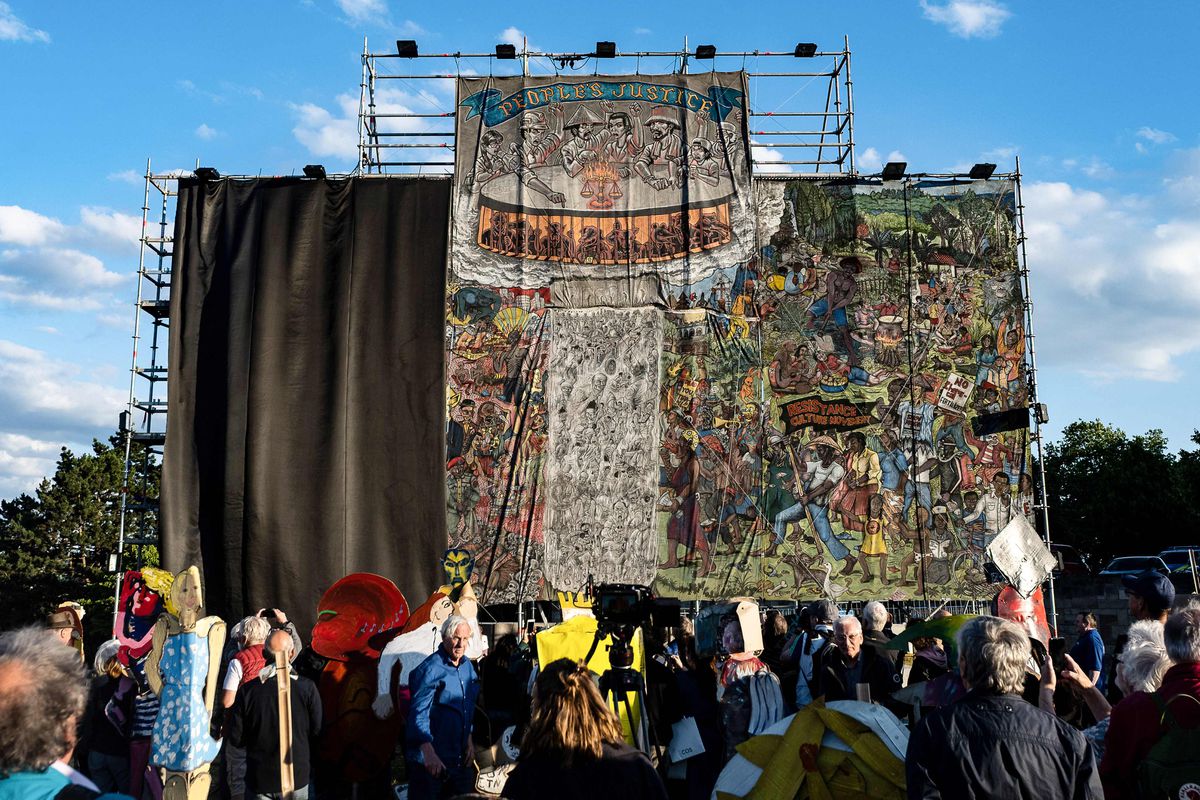 The Documenta contemporary art exhibition was embroiled in a major controversy that once again questions where the line is drawn between artistic freedom and political protest. Organizers have decided to cover up a work by a group of Indonesian artists that has been criticized for containing anti-Semitic images. The work, a 9 by 12 meter mural by the Taring Padi collective, had been installed in a square in Kassel (Germany), in one of the most visible locations of this biannual exhibition, which distributes the works across the city. It has been covered by three large black tarpaulins since Monday morning.

The work shows an apocalyptic civil war scene with demonstrators, demons, angels and policemen under the heading “The People’s Justice”. Among the mass of figures, two figures stand out. One is a stubborn police officer who wears a Star of David and Mossad – the name of Israel’s intelligence agency – on his helmet. The other shows a man with vampire fangs, curls on either side of his head, bloodshot eyes, and a kippah clearly caricaturing an orthodox Jew. He wears a cap with the inscription SS, the elite corps of Nazi Germany.

Although the anti-Semitism debate began weeks ago with allegations against the commissioners, the Indonesian collective Ruangrupa, of having invited organizations supporting the cultural boycott of Israel, controversy erupted over the weekend when the mural was first seen. Photos of the anti-Semitic figures began flooding social networks amid comments of surprise and outrage. Most of the critics and trade visitors did not see the work, which was installed three days after the Friday afternoon pre-opening organized by Documenta. The organization has stated that the fabric was torn and needed to be restored, delaying its installation.

The relativization of the Holocaust and anti-Semitic attitudes in general are closely watched in Germany, where it is an issue with particular connotations due to its history in the 20th century. Josef Schuster, President of the Central Council of German Jews, had warned for months that the Documenta could contain anti-Semitic works, but was met with criticism and even accusations of racism. “The origin of the artists who spread anti-Semitism is irrelevant. Artistic freedom ends where discrimination begins,” he said in a statement when the work was unveiled.

Since the inauguration, there has been controversy over the presence of the Palestinian group The Question of Funding, which has been accused of being linked to the BDS (Boycott, Divestment, Sanctions) movement, which advocates boycotting Israel over the occupation of Palestinian territories. In 2019, the German Bundestag labeled BDS anti-Semitic, meaning it cannot receive public funding. Half of the documenta’s budget comes from the federal budget.

The work now discussed is not the only one that has sparked controversy. The documenta is also showing a series of paintings entitled Guernica Gaza, in which the The Palestinian painter Mohammed Al Hawajri compares the bombing of Guernica during the Spanish Civil War by the Nazi Condor Legion to the Israeli army’s attacks on Gaza. “Israel as the new Nazi Germany? It’s anti-Semitic, no matter what definition of anti-Semitism is used,” says cultural journalist Tobias Rapp in The mirror. Rapp says these are bad works, clichés, “one-dimensional propaganda art so poor it will probably achieve the opposite of what its creators intended.” And wonder how the experts from Southgerman newspaperhow badly this controversy can damage the documenta.

According to the Israeli embassy in Berlin, the controversial figures in the Documenta work “are reminiscent of the propaganda of Goebbels and his henchmen in dark times in German history.” on his Twitter account demanded their withdrawal on Sunday: “They have absolutely nothing to do with freedom of expression, but with lifelong anti-Semitism.”

The organization has responded to those who are wondering why it allowed the exhibition of a work with clearly anti-Semitic components. “The management of the Documenta does not check artistic exhibitions in advance and should not do so,” says its general director Sabine Schormann a statement made public on Sunday evening. Amid suspicion that critics have not seen the work for the past week, Schormann asserts it was installed “Friday afternoon after the necessary restoration work had been carried out due to damage to the work’s 20-year preservation.” .

The collective Taring Padi attributes what happened to a misinterpretation of their work and apologizes. The installation, the statement said, “is part of a campaign against militarism and violence that we witnessed during the 32 years of Suharto’s military dictatorship in Indonesia and its legacy, which lingers to this day.” All military figures relate to the political context of their country and represent the corrupt government: “The generals and their soldiers, symbolized as pigs, dogs and rats, criticize an exploitative capitalist system and military violence,” they add.

The mural was first exhibited at a festival in Australia in 2002 and has since gone through several exhibitions without raising controversy, but it is the first time it has been exhibited in Germany and in Europe. “We are a progressive collective committed to supporting and respecting diversity. There is nothing in our works that aims to negatively portray a population,” insist the artists, who “as a mark of respect” have agreed to feature their work because “it is considered offensive in this particular context, Germany”. Work, they add, “now becomes a monument of pain because of the impossibility of dialogue”.

In Germany, the discharge debate is still fresh Jew sow the church of the city of Wittenberg (in the east of the country). The Supreme Court a few days ago dismissed a lawsuit demanding the removal of this 13th-century anti-Semitic sculpture, which is part of the medieval tradition of depicting Jews as pigs. The Jewish associations assure that it will no longer be exhibited, although an explanatory poster has been included for years.

In his opening speech, Federal President Frank-Walter Steinmeier criticized the organizers before Taring Padi’s work became known. He called the treatment of Israel “frivolous” and accused them of not properly overseeing the work of the commissioners. Secretary of State for Culture Claudia Roth called for more clarification from the Documenta. “Human dignity, protection against anti-Semitism, racism and any form of misanthropy are the foundations of our coexistence, and this is where artistic freedom finds its limits,” he said.

- Advertisement -
Share
Facebook
Twitter
Pinterest
WhatsApp
Previous articleBill Cosby found guilty of sexually abusing a young girl 47 years ago
Next articleThe 1% of the population that earns the most in Spain accounts for 17% of the national income, according to EsadeEcPol