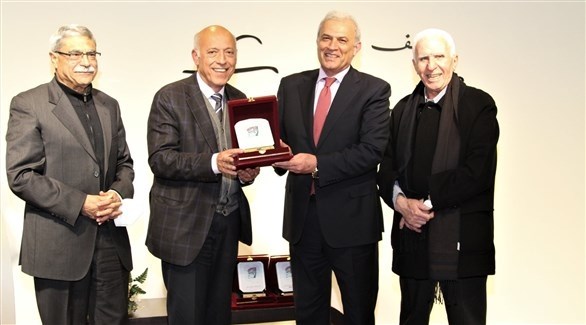 The announcement of the winners of the Mahmoud Darwish Prize for Creativity for the year 2022 coincides with the birth of Mahmoud Darwish 1941-2008, and National Culture Day on March 13.

The jury headed by Wassini Al-Araj said in the justifications for awarding the award to Darrag that the reason was “his dedication to his critical work and knowledge to establish a true concept of criticism based on objective mechanisms without compromising the aesthetics of the texts”. “

The committee clarified in a statement: “The eligibility of many Arab candidates, from filmmakers, visual arts and literary creativity, to win the Mahmoud Darwish Prize, and with the difficulty of separating many of the award winners with distinction,” the committee decided to give it equally to Mardam Bey and Hadidi.

He said that Mardam Bey is “the director of the Arabic series at Act Sud House, which sponsored Darwish’s work in its entirety, publishing, following and translating into French.”

The committee added that Mardam Bey “enabled Darwish’s literary blog to receive the attention it deserves in French and international cultural circles. In addition, he is one of the main actors in the Journal of Palestinian Studies.”

In the statement, it stated that Hadidi “had a strong cultural friendship with Mahmoud Darwish, and he was one of the most important supporters of her work, both editorially and critically.”

The committee cited the reasons for awarding the award to Waters, saying it was his “courageous and clear stances on Palestine and the resistance of his people against all forms of surrender, whether through his protest actions within the boycott movement to Israel, or his call to artists of the world to refrain from organizing concerts in Israel because it is the occupying country”.

The committee added that Waters “sang many poems to Darwish, including the sermon of the Red Indian versus the White Man, and strongly protested after former US President Donald Trump declared Jerusalem the capital of Israel.” After the occupation army’s attack on the Sheikh Jarrah neighborhood, he considered Israel an apartheid state.”

Waters said through a video recording released during the ceremony that he decided to donate the prize worth $12,000 to a Palestinian artist and pledged to provide a similar amount annually to an up-and-coming Palestinian artist.

On the recording, Waters talks about his relationship with Darwish’s poetry and how he chose to sing the words of his poems.

Faisal Darraj said in a speech he sent to the ceremony: “Mahmoud Darwish combined the love of Palestine and the defense of human freedom everywhere, walking from the air of Galilee to the sorrows of the redskins.”

Hadidi expressed her “great pride at this supreme honor because it bears the name of the great Palestinian cosmic poet, and my joy is especially overwhelming that Palestine today turns to two sons of Syria, the country that Mahmoud Darwish loved, and wrote about him with warmth.” , solidarity and belonging, and visited him repeatedly, and married him”. .

In a speech he sent to the ceremony, he said: “This award adds a new debt to Darwish’s many poetic, aesthetic, and moral debts that I have accumulated over four decades.”

And Mardam Bey’s speech at the ceremony said: “All lovers of poetry have a history with Mahmoud Darwish, and fate has decreed that my history with him be a branching fold, and his events accumulate in my memory, as a reader. , friend, translator and editor.”

He added: “However, I did not expect that the people in charge of the Mahmoud Darwish Foundation and its jury would be kind enough to award me a prize that bears his name, which is the most expensive in my opinion, and I do not deserve it anymore.” .”

“The moral value of the award far outweighs its financial value,” said Ramez Grace, deputy chairman of the Mahmoud Darwish Foundation’s board of trustees.

He added in a speech at the beginning of the ceremony, in which artist Uday Al-Khatib presented songs and lyrics from Mahmoud Darwish’s poems: “Despite all circumstances and obstacles, the Mahmoud Darwish Foundation continues its mission and its various humanitarian activities. realizing that the reality of the occupant, whoever he is and wherever he is, considers culture and art to be a threat to him and a threat to him”.