Anniversary of Victory Day in Algeria.. 60 years of the ceasefire with France 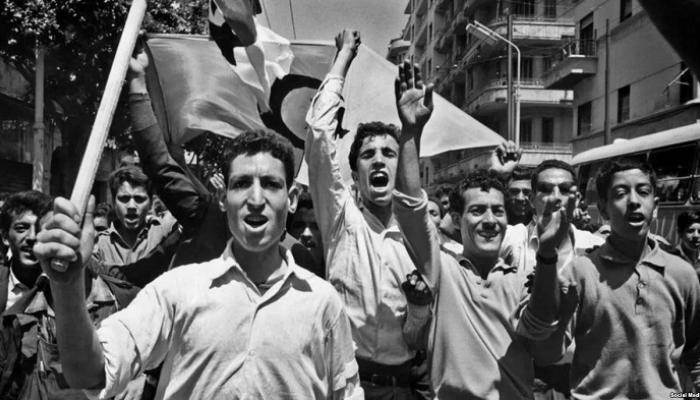 Closer to a military and political victory on the ground, and more akin to Independence Day, is “Victory Day” in Algeria, whose 60th anniversary will be celebrated tomorrow, Saturday.

Algeria celebrates tomorrow, Saturday, the 60th anniversary of the signing of the “Evian Agreements” that put an end to the war between the “National Liberation Front”, which was the legitimate representative of the Algerian revolution, and the French army, after 132 years of occupation, before a self-determination referendum was held on July 1. July of the same year, Algeria gained its independence on July 5, after 132 years of occupation.

After a revolution that lasted 7 and a half years, official France agreed to sit at the negotiating table with the interim Algerian government to reach a final solution to a ceasefire between the two parties and to accept the self-determination of the Algerians ” away from colonial France”.

In this report, “Al-Ain News” reviews historical details and information about “Victory Day” in Algeria, which is celebrated on March 19 every year, a day that remains a historic occasion that “glorifies sacrifices” of this Arab town. for the sake of achieving independence.

The beginning of the story of victory.

March 19 is called “Victory Day” in Algeria, the date on which it was decided to cease fighting between the Algerian “liberation army” and the French army after the signing of the “Evian” agreements on March 18. March/March 1962.

After the Algerian revolution adopted an integrated “military, political, diplomatic and sports” liberation strategy, the leaders of France found nothing but to sit at the negotiating table with representatives of the Algerian people to “get away with the least damage”.

The Algerian liberation revolution (1954-1962) did not reach what it did until after long stages that began on November 1, 1954, when the Algerians ignited their revolution to achieve independence, and its flame spread rapidly to most of the country.

The revolution did not reach a ceasefire until after a long course of struggle, as well as secret and public contacts and negotiations that took place in stages with the French side, as confirmed by several historical references.

The beginning was in February 1955, when the first official contact of the French authority took place between Major Montai (attached to the office of the Governor General of Algeria Jacques Soustel) and the Algerian combatant Mustafa Ben Boulaïd, in prison in Tunisia, one of the the bombers of the Algerian liberation revolution.

In May of the same year, the meeting was resumed in the Egyptian capital, Cairo, between the two delegations, but there was no reconciliation between them.

Later, in October of the same year, a threat arose following the kidnapping of the Algerian delegation made up of Mohamed Khider, Hussein Ait Ahmed, Ahmed Ben Bella, Mohamed Boudiaf and Mustafa Al-Achraf when they were traveling from the Kingdom of Morocco to Tunisia to participate in the meeting of the leaders of the Maghreb, which was the first aerial piracy in history carried out by French intelligence, which caused the suspension of negotiations and the interruption of communications between the National Liberation Front and the French government.

After the formation of the interim Algerian government in Cairo on September 19, 1958, General Charles de Gaulle visited Algeria and announced in his speech at the Governorate of Constantine (East) a plan for economic, cultural and social development known as the “Constantine Project”. . 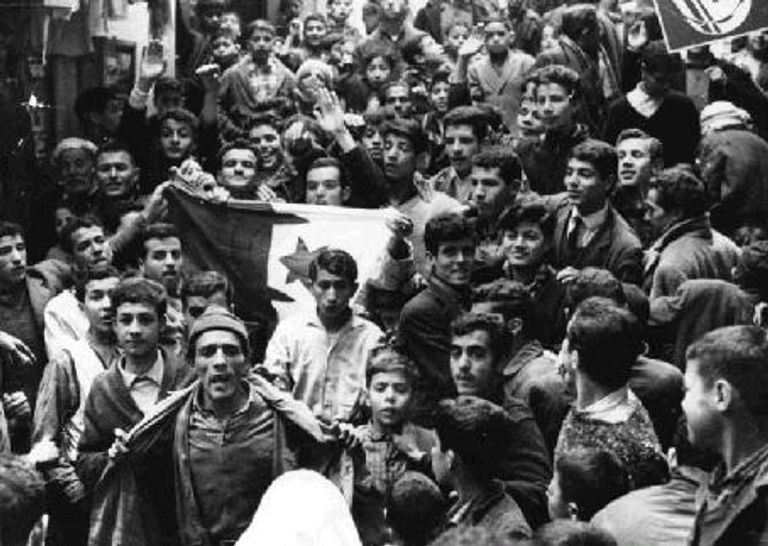 “The Ladder of the Brave”

On October 23, 1958, General Charles de Gaulle gave a press conference in Paris and announced the “peace of the brave”, in which he called on the Algerian militants to surrender, and suggested to the leaders of the National Liberation Front abroad join Paris by dialogue to end the situation in Algeria, but the interim government refused The Republic of Algeria has the offer..

On September 16, 1959, General Charles de Gaulle delivered a speech in which he declared the right of the Algerian people to self-determination. The response was not long in coming from the provisional government of Algeria and announced its willingness to enter into negotiations with the French government. . on the political and military conditions for the cessation of fighting, and the conditions to guarantee the implementation of self-determination.

Officially, on November 10, 1959, former French President Charles de Gaulle offered the leaders of the revolution to enter into negotiations to discuss the conditions for stopping the fighting and ending the battles.

In February 1960, contacts took place in Tunisia between Abdelhafid Boussouf, Minister of Armaments and Public Communications of the Provisional Government of the Republic of Algeria, and the historian André Julien, after which the French side announced its willingness to receive a delegation from the leaders of the revolution in Paris to find an honorable end to the battles The Algerian government accepted the temporary offer and decided to send emissaries, namely Muhammad Al-Siddiq bin Yahya and Ahmed Boumanjal.

In November 1960, Charles de Gaulle first mentioned the name “Republic of Algeria” in a speech after the Algerian interim government rejected his conditions, including laying down arms and cessation of fighting.

After the former French president tried to raise the idea of ​​”dividing Algeria by dirt” amid Algerian rejection, mass demonstrations broke out in several Algerian and French cities on December 11, 1960, before the United Nations General Assembly issued on December 20. from December. the same month “a list of recognition of the right of the people”. Algerian in determining his own destiny.

At the end of January 1961, the French government informed its Swiss counterpart of its desire to get back in touch with the Algerian National Liberation Front. The Swiss minister, Olivier Long, contacted one of his officials to consider the possibility of formal negotiations, and the leadership of the Algerian revolution responded to that. 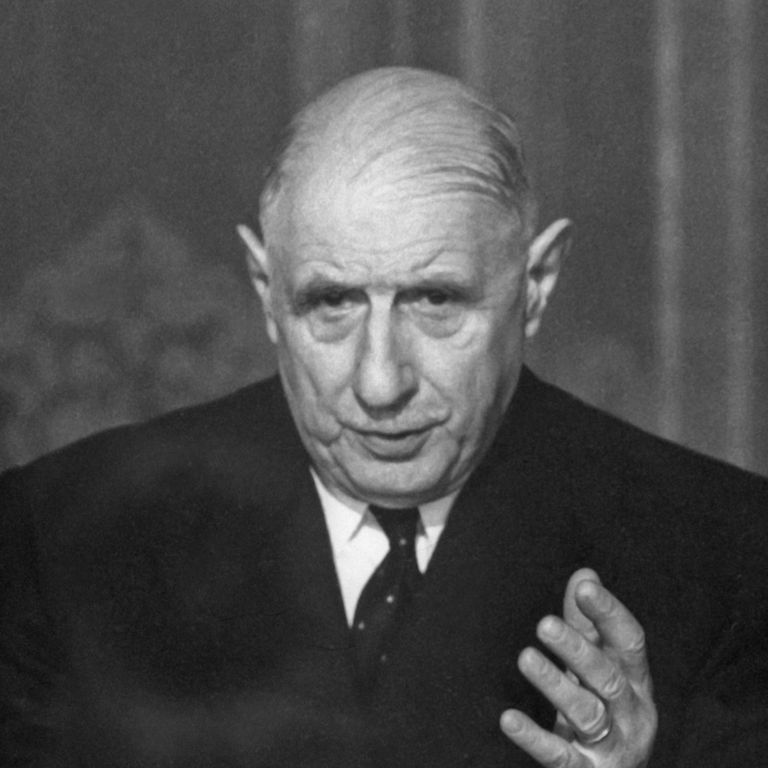 On February 20, 1961, secret talks began in Lausanne, Switzerland, between the Algerian and French delegations. The nature of the talks was that the French point of view meant “Northern Algeria without the Sahara”. -determination and full sovereignty over the entire country, which made the positions of the two parties very far apart on the issues raised for dialogue, and the negotiations ended in failure after 7 hours of talks.

In April 1961 there was a rebellion within the French army led by 4 generals against the policy of General de Gaulle, president of the Fifth Republic, the French authorities were in danger and the division within the French military forces became evident, situation that forced Charles de Gaulle to seek an urgent solution to the Algerian problem, so he communicated it to the government. Following these events, the Algerian and French governments announced the official opening of the first negotiations in the Swiss city of Evian on May 20, 1961.

Negotiations officially began between the two governments in the presence of the Swiss mediator, Olivier Long, when the French delegation offered the armistice, the cessation of military operations, a concession law for the Europeans and, finally, the right to self-determination for the thirteen northern provinces without the Sahara on June 13 after the Algerian delegation rejected the French demands.

In July 1961, former French President Charles de Gaulle held a press conference in which he declared that “Algeria is an independent country”, after which negotiations between the two governments continued at various stages, before confirming in September that ” the Sahara is Algerian”. of the same month. 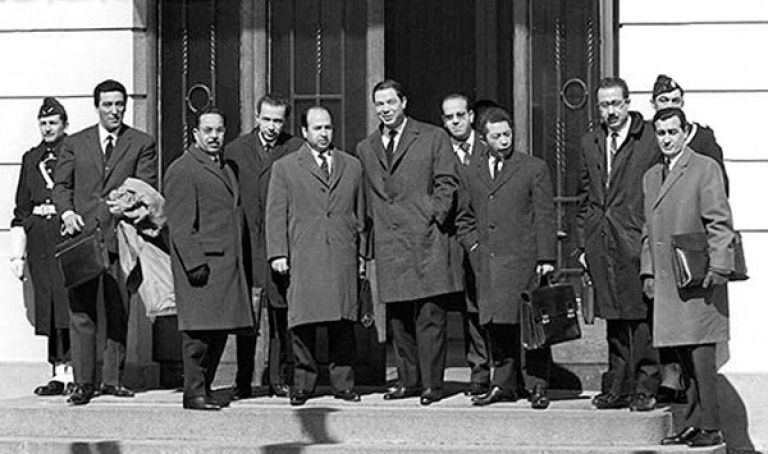 After about a year of contacts and negotiations, the Algerian and French delegations reached the terms of an agreement known as the “Evian Agreement” (after the Swiss city of Evian), according to which a ceasefire was established throughout the Algerian territory on March 19, 1962 at 12 noon.

The agreement included two axes, the first on the organization of “the political and public affairs of Algeria” during the transition period that runs from March 19 to the official declaration of Algerian independence on July 5, 1962, period during which the popular referendum was organized in which the Algerians obtained Independence by an overwhelming majority, where the people chose by majority to separate from France and live in a free and independent homeland that bears the name of Algeria.

The French government took a series of political and judicial measures in anticipation of this, including the release of all prisoners languishing in jails, whether in Algeria or France, allowing those fleeing Algeria during the years of the revolution and refugees in neighboring countries like Tunisia. and Morocco to return to their country, and the recognition of the Liberation Front Party, El Nacional is a legitimate political party.

In addition to giving “full freedom to the Algerian government to choose its institutions and its political and social system in accordance with the interests of the people it represents, and to extend its control over the entire national territory and impose its sovereignty in all fields, especially in the fields of military defense and foreign relations”.

With the guarantee of “the rights of the French who have lived in Algeria for many years and to guarantee their security and respect for their religious rites” (before the self-determination referendum).

As for the second axis of the agreement, it included “guaranteeing the economic interests of France and the French and cooperating in the investment of natural resources.”

And “gradually reduce the number of French forces present in Algeria until their complete departure from the country”, and “allow France to use the Marsa al-Kabir military naval base in Oran for a period of 15 years, renewable in the event of an agreement between the two parties, and the use of some airports and military sites if necessary.” 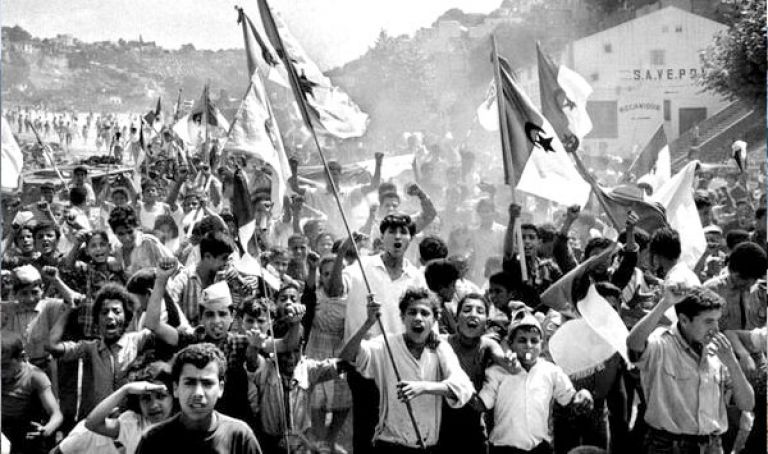