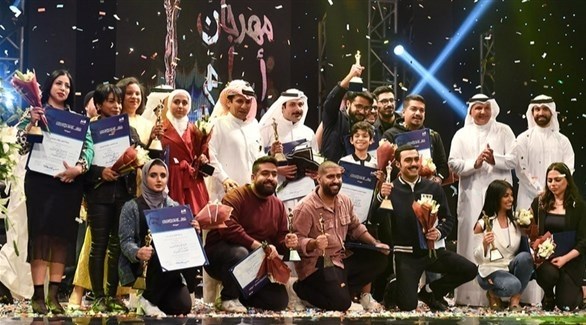 The Arabian Gulf Theater Company’s show “Anarchy” won the most Youth Theater Awards in Kuwait in its 13th session, which closed on Sunday at the Dasma Theater in the capital, Kuwait.

The show won ten awards, including the “Best Integrated Show” award, which is the grand prize of the festival named after the late Khaled Al-Nafisi, the best harmonious show, the best direction of Muhammad Al-Ansari , the best written by Fatima Al-Amer, and the best actress by Suad Al-Husseini.

As well as the best actor in a second role for Faisal Al-Saffar, the best decoration for Muhammad Behbehani, the best makeup for Abdulaziz Al-Juraib, the best costume for Hessa Al-Abbad and the best lighting for Fadel Al-Nassar.

Muhammad Al-Ansari, director of “Anarchy,” said he was happy with all the awards the play won and thanked the team he worked with.
According to its director, the play revolves around a man who refuses to leave his home and country, despite suffering from Alzheimer’s disease, and its main idea is that a person is born without bad habits, but then acquires them. .

Five Kuwaiti youth theatrical performances competed for prizes at the festival, which was organized by the Public Authority for Youth, all of which were screened at the Dasma Theatre. The jury was formed under the chairmanship of Ali Haider and the membership of Khaled Amin, Ayman Al-Khashab, Haya Abdul Salam and Faisal Al-Obaid.

Khaled Amin confirmed to Reuters that what sets the festival apart this year is the presence of young people who love working in the theatre.
He said that the offers that were submitted “are good, not very good and not great, but we expect them to be very good and great in the coming years.”

He explained that the show “Anarchy” deserved all these awards because “an experience has matured with all its artistic elements. That was a detailed decision of the committee… We went into all its details and worked on another viewing of the works to ensure eligibility. of the work for the prizes”.

The award for Best Actor in a Leading Role went to Abdullah Al Balushi for his role in the Kuwaiti theater group’s play “Saliha.”

Al-Balushi told Reuters at the end of the ceremony: “It was a tough competition between all my brothers. The next one is better, God willing. You do what you have to do and success belongs to the Lord of the Worlds.” “

She won Best Actress in a Second Role, Fatima Al-Osaimi for the play “Wameed” and Badr Al-Shuaibi Best Music and Sound Effects for the same play.

The Incentive Creativity Award went to Zainab Al-Ali for the play “Qabre Wan” by the folk theater group, and the Trend Art Production Award went to Yasmine Al Mulla for the composition of the play “Zakira Yellow”.