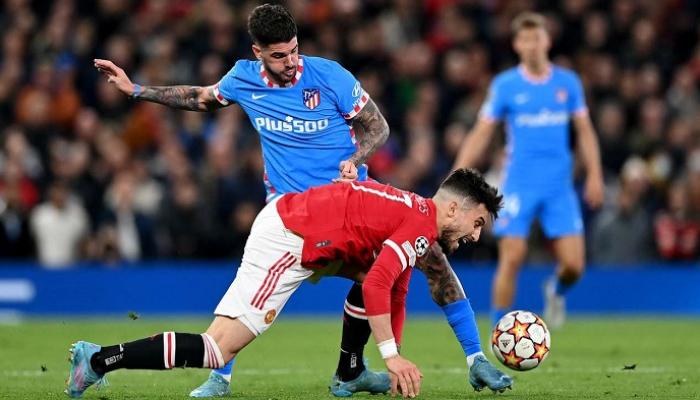 Atlético de Madrid snatched qualification for the Champions League quarterfinals (Tuesday) with a 1-0 victory over host Manchester United in the second leg of the round of 16.

The first leg that Atlético de Madrid received ended in a 1-1 draw, with the metropolitan team winning (2-1) on aggregate in both games.

Al Ain Sports presents, in the following lines, a technical analysis of the match between Manchester United and Atlético de Madrid, which ended with the departure of the “Red Devils” from the final price of the Champions League.

The Manchester United coach, Ralf Rangnick, continued to bet on a plan (4-2-3-1), with the Portuguese Cristiano Ronaldo at the helm, while the Argentine Diego Simeone, his counterpart from Atlético de Madrid, opted for a (3-1-4-2). ) which has become one of his favorite plans this season.

In any case, the tactics are just plans on paper for Simeone, who bets on the same purely defensive style of play, based on counterattack as a way to win, or at least avoid losing.

Atlético played in the traditional way for more than 10 years with the Argentine coach.

In the first quarter of an hour, Manchester United took possession of the ball, while Atletico Madrid only spoiled the attacks of the owners of the ground, before showing their attacking fangs.

The Atlético de Madrid players in general, and the defense and central defenders in particular, knew how to send accurate longitudinal balls to avoid being cut by the United players, which resulted in several lightning and promising counterattacks, the goal of the game came by one of them in the 41st minute, signed by Renan Lodi.

That game raises questions about the way in which Rangnick prepared his team to face Atlético de Madrid. Didn’t the German coach find time to watch Atleti’s games and study their way of playing, which doesn’t require much study and analysis?

Atlético de Madrid did not present any kind of surprises in the second half, especially with the end of the first half leading with a result that gave them the classification card, which placed them in an ideal position to play in their way that everyone knows, which is defending fiercely in front of the penalty area, even his plan became (5-4-1).

On the other hand, Manchester United’s attack was lackluster, just like the first half, even after the entry of Edinson Cavani (75 s) to play alongside Ronaldo and the plan changed to (4-4-2) .

In the end, Atletico Madrid achieved exactly their goal, perhaps because a goal was already being scored, unlike United, who suffered from randomness and confusion, and lost a tactical battle that could have been won if handled correctly.

- Advertisement -
Share
Facebook
Twitter
Pinterest
WhatsApp
Previous articleLower Saxony and Bremen: motorcyclists stuck at 181 km/h on a country road
Next articleSunlight takes Edge as a Service to the next level by ordering edge infrastructure from a single source