Analysis of the match between Iraq and the Emirates.. Aruabarina’s fear falls on white 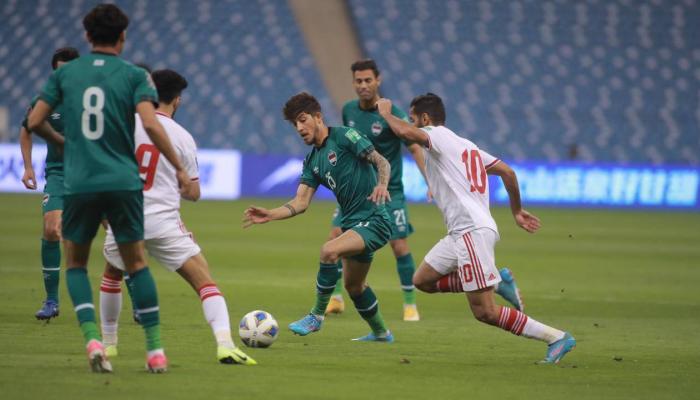 The United Arab Emirates soccer team lost 1-0 to Iraq in the penultimate round of Asian qualifying for the 2022 World Cup.

And the Argentine coach, Arruabarina, failed in his first game with the white Emiratis to correct the course and present a better show than the previous one, after he decided to change the way he played and tend to be conservative, and play with fear.

The UAE team started the match in a state of deflation, as if playing for a draw, as they needed a point to qualify for the Asian playoffs in the qualifiers for the 2022 World Cup.

This appeared in Arruabarina’s plan, where the Argentine coach decided to play in libero form 3-4-3 to secure the defensive side, but this affected the offensive effectiveness of the UAE team.

As for the Iraqi team, they were the initiator of the attack, mainly because they needed to win and there was no other alternative to keep their hopes alive in the Asian extra card.

The main problem faced by the Emirates team in the first half was the loss of the ball very quickly and the inability to prolong the attacking time, which allowed the Iraqi team to gain more control in the course of the match, as Al -Abyad was affected in midfield by the absence of player Abdullah Ramadan, the star of Al-Jazeera, due to suspension.

In the 22nd minute, the most dangerous opportunity of the half-time was lived for the Emirati player Ali Saleh, who received a cross and became a single player in the goal, but headed the ball into the ground to go over the goal. crossbar.

What set the Iraq team apart in the first half was that their players handled the ball better under pressure than the United Arab Emirates players.

The referee suspended the game twice in the first half to consult with the video referee about the possibility of calculating a penalty kick for Iraq, but ordered the game to continue playing both times after verification, so the first half was negative in the result and performance.

In the second half, the Iraqi team started as a forward and finished the first half, and managed to score the first goal in the 53rd minute of the match, after a defensive error, in the midst of the absence of the offensive effectiveness of the United Arab Emirates team Joined.

After the goal, Arrobarina tried to reinvigorate the team’s performance by pushing Khalil Ibrahim in place of Mahmoud Khamis, and Sohail struggled in place of Ali Saleh, but the changes were of no benefit to the team.

Despite the return of star Ali Mabkhout to the team’s attack, Al-Abyad did not have any offensive statement that created real opportunities on the Iraqi team’s goal, so Aruabarina appeared in his first match less than expected, as he did Al-Abyad. He did not present under his leadership any difference with what was presented under the leadership of the article’s coach, the Dutchman Bert Van Marwijk.