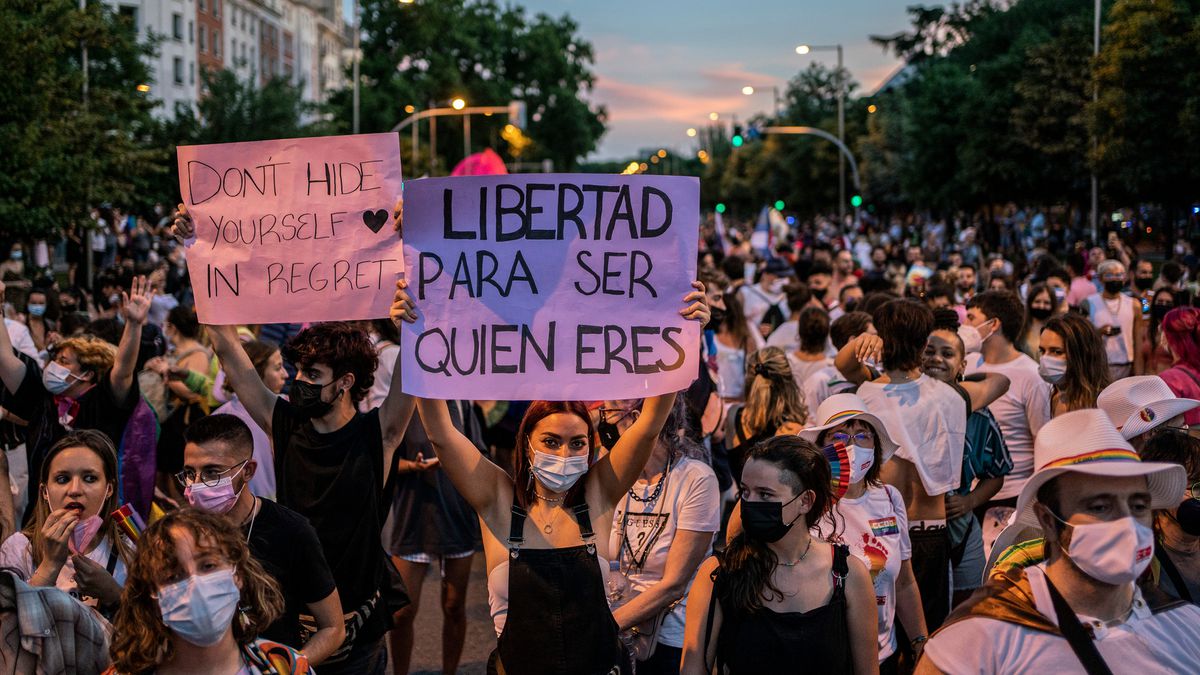 With an interview of only 10 minutes and without the need for a psychiatric report, but with a full legal evaluation. Thus, the judge of Ourense, Darío-Carpio Estévez, has decided to allow Alejandro, an eight-year-old boy, to change his identity, a right previously reserved for adults. Alejandro knew from an early age that his biological sex did not match the identity with which he perceived himself, as he himself explained to the judge. Since then, and to this day, his family has had to go through a complex administrative web to get the Orense Registry Office to issue the favorable order to have his birth certificate corrected and his sexual identity reflected in the official documents.

This is still an unusual occurrence in Spain, which only started processing the so-called trans law a year ago. This Monday it left the Council of Ministers to be sent to Congress where it will be debated between the political groups. That Interim bill for real and effective equality for trans people and for ensuring the rights of LGTB people includes the free self-determination of gender, which means that a person can change the name and gender on the identity card only with their will from the age of 12, gradually: from the age of 16 without conditions, between 14 and 16 with the consent of their legal representatives and between 12 and 14 by court approval.

“The reality is that the names have been changed so far but not on a legal level as we are still waiting for the trans law that PSOE and Podemos promised both in their programs and in the government pact but which they still don’t deliver on “, explains Natalia Aventín, president of the Euforia Familias Trans-Aliadas collective, which advised Alejandro’s family.

The group was certain, as the order now signed by the Ourense magistrate, confirmed that there was more than enough legal basis for this allegation and therefore initiated the administrative procedure.

Aventín describes the ignorance that exists about this procedure even in the civil registers. “They speak to you out of power; They tell you that you don’t know what you’re doing and they always pressure you not to make a decision that affects your life and your personal rights,” she protests. And he adds that in the case of Alejandro, “this judge was informed, he decided to spend his time well, but not everyone has this priority because in small towns where judges share the register with courts, they have us many times they have said things more important to do,” another way he sees institutional violence being used against this group.

Alejandro’s family, very conscious and active, began the process in May 2021 and despite the fact that the little boy had had authorization to change his name since he was five years old, last September an order from the Ourense judge in charge of the registry office at the time refused him the registration change without having asked the child, arguing in his decision that the minor was “insufficiently mature”. The family appealed the decision to the competent body, the General Directorate for Legal Certainty and Public Confidence, which reversed the decision and forced the withdrawal of the procedure, so that in a personal appearance before the person in charge of the registry office, “the degree of maturity of the registered person and depending on the result, a new decision will be taken”.

It was conducted by Judge Estévez, who was in charge of the registry office at the time. After conducting a legal investigation into the situation and questioning Alejandro, he issued a positive injunction, accompanied by a detailed rationale based, inter alia, on judgments of the Supreme Court and the Constitutional Court, the Spanish Constitution and the European Charter of Human Rights.

“If the right to rectification of gender registration is directed to the free development of personality, limiting its enjoyment to adults is a deprivation of that constitutional principle to minors,” the judge said. It also affirms that the lack of legitimacy for minors to have their gender rectified in the registry office “means denying them their right to sexual identity, which is essential for the free development of their personality and dignity, in order to deny their right to moral integrity undermine intimacy and privacy and to avoid detrimental effects on their health more broadly”.

From their meeting, “a relaxed chat,” with the little one, the magistrate points out that they talked about the things you can talk about with an eight-year-old: his favorite sport, his holiday expectations, his friendships, the activities he does … moving away Of course he said that he liked going to the climbing wall with his friends. “He is a very alert minor who gets very good grades in his academic field as a student, like the majority of notable and outstanding students,” the car says. And the judge points out that the little boy told him that despite being registered as a woman, he had “long thought of it as a man” which “he had already told his parents in 2018”.

The magistrate invokes the right to gender identity, which he believes is “closely related to the dignity of every human being and his right to free development of personality”, and highlights a “sufficient maturity” and a “social situation”. of transsexuality” by Alejandro, highlighting the support of the minor’s family environment and peer group.

The judge emphasized that “society would gain nothing” by denying the child the right to change once they “accredited” and “the persistence of the dissonance between the assigned gender and the identity they perceive as their own dissonance confirmed over time”.

The environment made it easy for Alejandro. His family actively supported him in his change of identity and “that’s very important,” says Aventín. The child’s mother, María José, affirms that she is aware that social ignorance challenges the ability to recognize one’s identity in childhood. And he wonders if all cis people — those whose gender matches their sex at birth — know what their sexual identity is since they have the lowest level of common sense, “why wouldn’t trans people know?”

Despite the relief that this verdict represents for the trans community, received just outside the Pride celebration, Alejandro’s family is clear that “there is nothing to celebrate” and is waiting for the law to be approved so that Minors can change their identity in the registry office and “the state stops hindering minors”. “We will all celebrate when trans children have the same rights as cis children,” says the President of Euforia Familias Trans-Aliadas.

Alejandro is not aware of the social significance of his case. She has lived with her transsexuality as a matter of course since she was five. When his mother announced a few days ago that he could finally sign up with the name he uses, he looked at her, pointed to a tooth and said, “Look mom, I’m moving.”