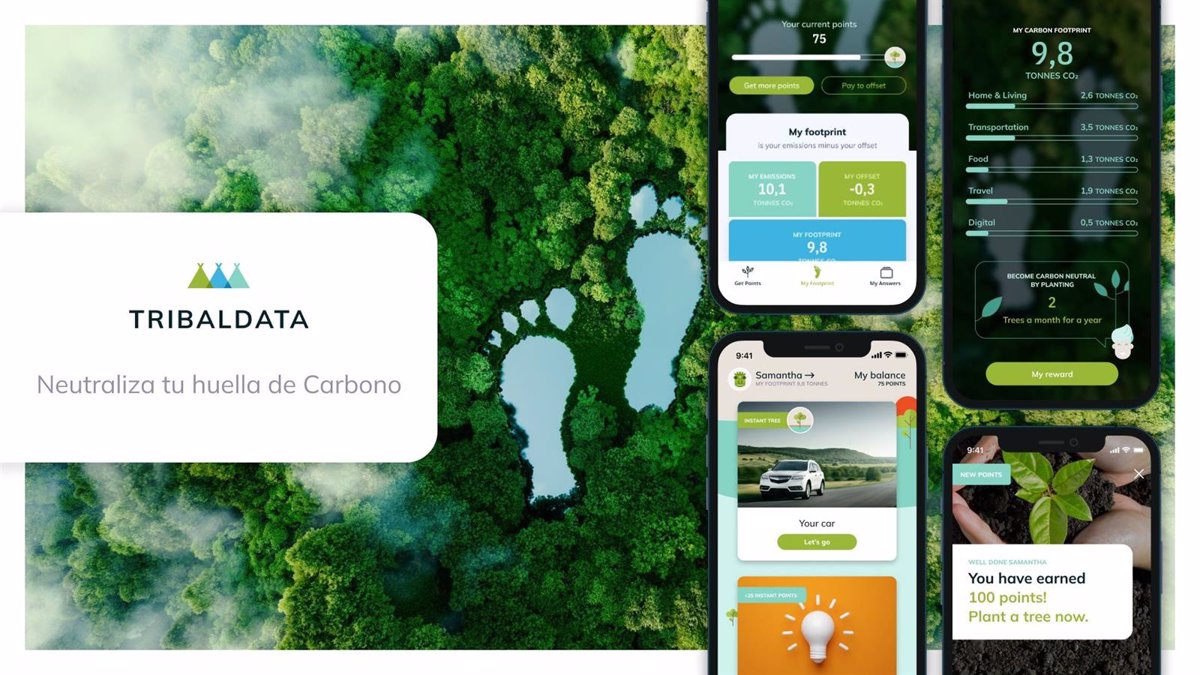 Each Spaniard emits an average of 7.5 tons of CO2 per year, according to estimates by the company Tribaldata, so the commitment to reducing the carbon footprint should come not only from governments and companies, but also from citizens and it would be necessary to plant 610 trees each to reduce its environmental impact to balance.

This company, founded in Spain in 2019 as an app that allowed internet users to convert the advertising value of their data into planted trees, has decided to go one step further to achieve its goal of empowering citizens to become a contribute to sustainable development, as indicated in a statement.

Now it has become a climate coaching app that allows a person to measure their personal environmental impact to become aware of their individual responsibility to the planet, get recommendations on how to minimize that footprint and plant trees to offset their own impact and to neutralize.

For this purpose, the app initially contains a CO2 footprint calculator, which is based, among other things, on public data sources such as Eurostat and Our World in Data. Depending on the country in which the user lives, the size of his apartment, the means of transport he uses, the type of food he eats, his recycling habits or the use of electronic devices, he receives an estimate as a result. its annual environmental impact, measured in tons of CO2.

Based on this analysis, the user can have a series of questionnaires related to his habits and lifestyle by categories (mobility, nutrition, technology, energy consumption, etc.) daily climate change choices. Based on the answers, you will receive a series of tips and recommendations that would lead to a reduction in your carbon footprint.

As a reward for their commitment, the user receives points that can be converted into planted trees. If you fill out all the forms, you get points to plant one tree per week. Tribaldata has an agreement with Eden Reforestation, one of the most recognized reforestation organizations on a global scale, and the species of tree they work with is the mangrove. It is estimated that each absorbs an average of 12.3 kilos of CO2 per year and its life expectancy is 25 years, so once planted its effects would extend over that period.

Currently, the reforestation actions through the app are focused on Madagascar where, in addition to their climate change benefits, they provide work for the local economy in the region as well as the protection of marine biodiversity by growing in wetlands. However, the company is in the process of entering into new agreements to encourage tree planting also on European territory and to offer its users the opportunity to participate in other types of sustainable actions such as the conversion of CO2 into biochar through carbolysis or wind farms.

The Tribaldata app, available for iOS and Android, already has a community of more than 12,000 users who have made it possible to plant more than 86,000 mangroves with a capacity of absorbing more than 1,000 tons of CO2 per year.

OPEN PARTICIPATION FINANCING ROUND WITH CROWDCUBE

The startup has opened a funding round with the goal of raising 1.3 million euros to launch its UK launch, grow in Spain and continue to improve its tool and expand its services.

Currently, around 70% of the round is tied to investors from the advertising industry and impact investors. But he has just opened a participatory round of funding (crowdfunding) through the CrowdCube platform to allow other people and small investors attracted to his project to participate with a contribution from €10.8.

Since its inception, the project has received an investment of around 1 million euros to develop the app, the user community including funds provided by the founders, investments from business angels affiliated with the Singularity University of Silicon Valley and the financial support from the CDTI and ENISA.