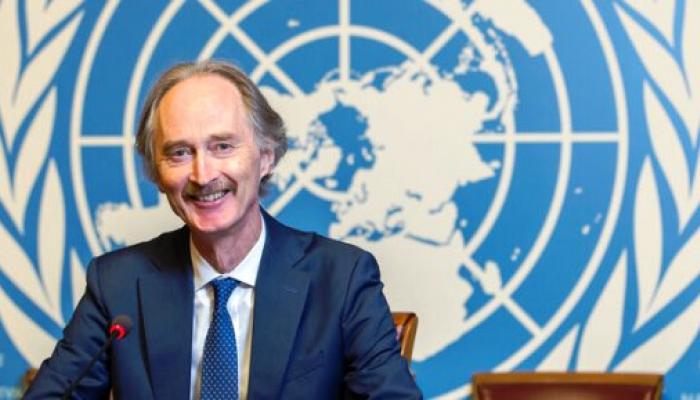 Before the conclusion of talks between the Syrian parties in Geneva on a new constitution for the country, a UN official announced a breakthrough in the file that has been stalled for years.

UN Special Envoy for Syria Geir Pedersen expressed hope that progress will be made in the next round of talks aimed at drafting a new constitution for Syria, due to take place next week in Geneva.

Last October, the sixth round of talks between 15 representatives of President Bashar al-Assad’s government, the opposition and civil society ended without any agreement on how to move forward.

But Pedersen said the heads of the government and opposition delegations reached a sophisticated mechanism on Sunday to find common ground during the last day of talks due to conclude on Friday.

On Sunday, the UN special envoy said in a press release that “Syria remains one of the most dangerous crises in the world”, stressing the need to “move forward on the path towards finding a political solution”.

The Syrian Constitutional Committee was established in September 2019 and held its first meeting the following month.

The talks are aimed at drafting a new constitution for Syria. Hopes are high that the talks will succeed in launching a broader political process.

“The commission must work in a way that builds trust,” Pedersen said.

“During this tour, I hope that the Constitutional Commission will work with a sense of seriousness, determination and determination to achieve the progress that the situation requires,” he added.

He expressed the hope that “steady progress” will be made if the three delegations implement what they had earlier promised.

The seventh round of talks focuses on four principles: the foundations of governance, the identity and symbols of the state, and the structure and functions of public authorities.

Delegates will set aside one day to discuss each principle, with one day devoted to trying to consolidate any progress.

And they criticized each other after the sixth round, with each holding the other responsible for the lack of progress.

But Pedersen said that on the last day the heads of the two delegations reached an understanding on how to move forward, specifically on finding a better mechanism to review the proposed constitutional texts.

“I am looking forward to Friday to see how this will be implemented,” the Norwegian diplomat said.

Pedersen met the heads of the two delegations on Sunday in a meeting in which an agreement was reached on the four points that will be dealt with next week.

After the meeting, Pedersen, Kuzbari and Al-Bahra held a meeting with the fifteen members of the civil society delegation.

Pedersen described the meetings as “good” and expressed hope “that progress can be made this week.”