Amphibians and reptiles are threatened: an app should help 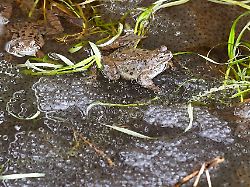 Lower Saxony and Bremen
Amphibians and reptiles are threatened: an app should help

Animal protection as an app, that works! With the “HerpetoMap” project, Nabu Lower Saxony has developed a digital reporting platform with which the presence of amphibians and reptiles is determined. This is meant to protect animals in a more specific way.

Hannover (dpa / lni) – Not only are insects dying, many amphibian and reptile species such as toads and salamanders are also threatened. Especially now, when temperatures are rising, many animals are on their way to their spawning grounds. There are dangers that lie in wait for them, for example, when crossing streets. But that’s not all: “The decrease in natural water bodies in the open field, the decrease in insects and, last but not least, the use of fertilizers and poisons in agriculture are seriously affecting animals” said amphibian expert Ralf Berkhan of Nabu. lower saxony.

In order to be able to determine and locate endangered animal species, Nabu Niedersachsen has developed the “HerpetoMap” reporting app. Trained experts use the app to report which species they have observed in which places. 2,800 animal species have already been recorded since inception in mid-2020. This knowledge helps determine where to place guards or fences. 90 volunteer amphibian experts are already involved, but according to Nabu, interested parties without prior knowledge can also help, by observing or with toad walks, for example, collecting and counting the animals.

In addition to the reporting app, laymen in particular can also use the “Simplified Species Identification” app. This is a determination app for amphibians and reptiles. According to Nabu, this should motivate more people to deal with native species of animals and plants.