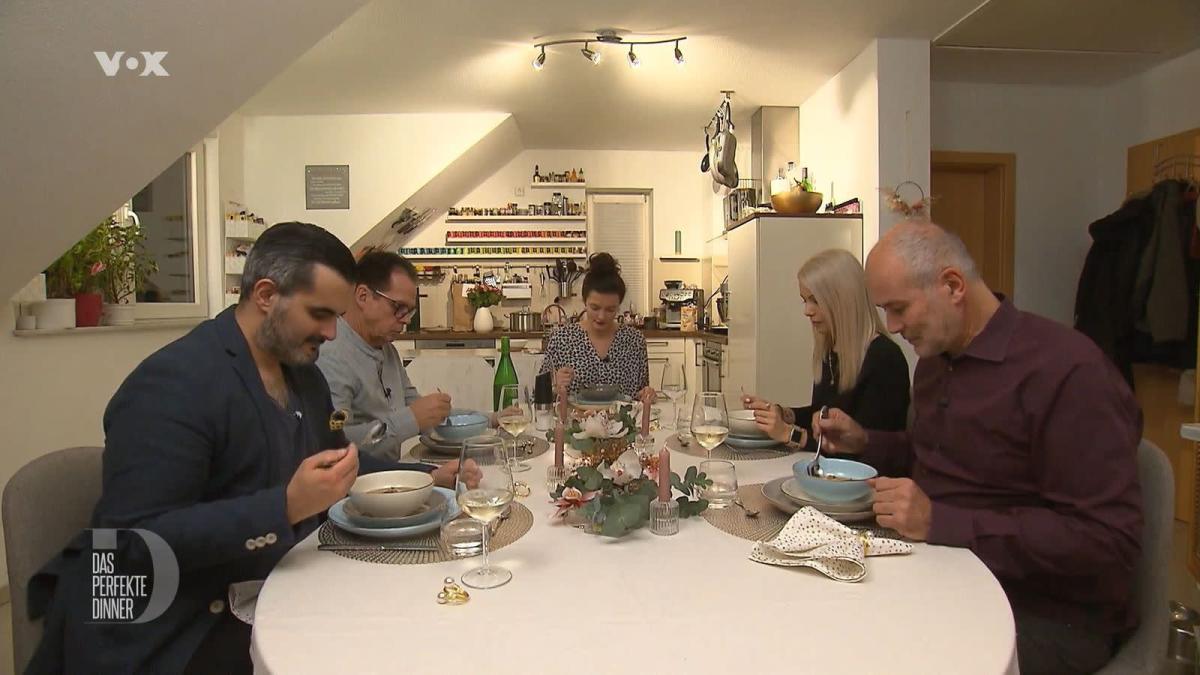 On day 2 we go to Amira (27) in Wetter near Marburg. “I already cooked a five-course menu for 17 people for Christmas,” the girl in the group confidently jumps into action. But at night not everything goes according to plan…

When it comes to cooking and decorating, student Amira (27) is a perfectionist, which she wants to prove to her guests on Day 2 of “The Perfect Dinner” in Marburg. Despite the broken stove, preparations are going according to plan. “Usually I need a lot of salt,” explains Amira, explaining that she wants to season the food more gently for her guests as a precaution. Her motto is “What do truffles, pretzels and chocolate have in common”:

The wine drinker Rainer (66) likes to party drunkenly. Kurt (63) thinks the menu is too cryptic: “I find this speculation very strange.” After an appetizer of peach syrup and Christmas spices, Amira serves the starter: chestnut cream with homemade truffle ravioli. Be quiet. Kurt breaks the silence: “But the truffle is clearly in the ravioli.”

Amira jumps in, “Damn, I forgot something! Actually, should a little truffle oil be added to the whole thing, if anyone wants it?” They all gratefully decline, “Oh no.” Rainer: “There are enough truffles in that thing.” Chantal (37) thinks: “The truffle flavor has surpassed everything.” Overall Rating: Quite over-seasoned.

The main course: wine-marinated roast beef with napkin dumplings and stout sauce. Chantal’s Comment on the Gingerbread Spice Caramelized Red Cabbage: “Interesting.” Everyone cheers, only host Amira complains: “The meat was better at the rehearsal dinner, which annoys me a bit.” Kurt chews, “Just shut up. Don’t talk bad about it.” Zafi (38) saves the situation: “I think your sauce is great.”

“It’s spicy again”, Chantal does not take well with intense aromas. “Unfortunately, the roast was dry.” Zafi also acknowledges some shortcomings later: “The main course was very difficult for me. After the main course I had a kind of hair on my tongue because it was too spicy, too sweet… it totally overwhelmed me.” Amira: “Does anyone want another helping?” The answer comes very quickly: “No, thank you.” Not even Amira tastes her own dish: “I’m not happy with myself.”

Like the night before, Amira’s has pannacotta for dessert, this time with tonka beans and mulled wine sauce. Rainer’s consistency was highly praised, with the presenter warning, “Mine will be a little firmer than Rainer’s.” Kurt rightly asks, “And where’s the chocolate?” After all, it was announced in the motto. “In the sauce,” Amira admits to a change in menu. “Originally it was supposed to be a chocolate cake with a liquid core.”

Pannacotta pioneer Rainer judges: “It had too much gelatin for my taste.” Cinnamon sticks and star anise in the boiled cream annoy Kurt: “A decoration you can’t eat doesn’t belong on the plate.” With 29 points, Amira creates a tie with Rainer.