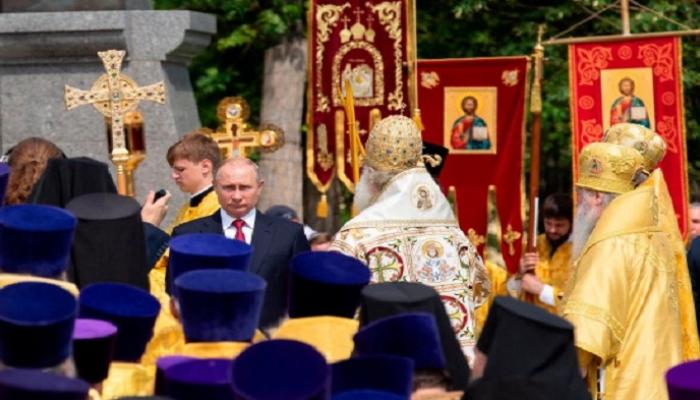 An American magazine placed Russian President Vladimir Putin on a psychoanalytic bench to answer the motives for his military operation in Ukraine.

In the Freudian interpretation of the war, “Foreign Policy” magazine returns to Putin’s childhood, the stories of Prince Vladimir and the dreams of the Russian elite.

He said many experts believe Putin’s childhood, intelligence work and reading of Russian history provide an explanation for his hostility to the West.

Whether or not the Russian president’s “invasion” of Ukraine ends soon, his enduring hatred and mistrust of the United States and Western powers will not stop, as he is believed to have been left no choice but to wage an unwarranted war.

The magazine points out that this hatred is not limited to Putin alone, but is shared by many Russian elites, who supported him for two decades, and were also one of the main reasons for his rise in popularity in their country.

The magazine describes the Russian president’s continued hostility to the West as a complex story, further enriched by the 69-year-old Putin’s personal history as a child during World War II and a Soviet spy, as well as the tangled millennia-old history of Russia itself, or at least Putin’s reading of it. More importantly, Putin and the many right-leaning Russian officials, elites, and academics who support him not only wish to be part of the West and the post-war liberal value system, but believe that their country is destined to be an anti- great power.

And Foreign Policy considered that even “if Putin is somehow removed from power, the generals and security officials around him are tasked with carrying out aggression like him,” noting that Russia is already almost as economically isolated. as it was during the Soviet era.

The magazine believes that Putin may have been preparing for this moment longer than people think, referring to what former Kremlin adviser Vladislav Surkov wrote after the 2014 annexation of Crimea, where Surkov described it as “the end of the epic journey of Russia”. towards the West and the end of the attempts Russia’s repeated and futile turning towards a part of European civilization, Surkov predicted that Russia would live in geopolitical isolation for at least the next 100 years.

According to the magazine, Ukraine became a cornerstone of Putin’s anti-Western behavior in large part because the Russian leader and his supporters saw the historically brotherly country as “the last red line in a long chain of Western humiliation.” speeches of the Western anti-Russian project.

This perceived humiliation (of Russia) goes back a long way, not just in the 30 years after the end of the Cold War, not even in the 100 years after the founding of the Soviet Union in 1922, but as far back as the European Enlightenment. more than 3 centuries ago, which led to the emergence of the concepts of freedom, democracy and human rights.

For Russian nationalists like Putin, these developments have gradually overshadowed Russia’s distinctiveness as a civilization.

Putin does not see himself, according to his account, as an heir to the soviets, but considers himself the protector of Russian civilization and the Eurasian empire of Moscow, whose roots go back to before Saint Vladimir, Prince of Kiev in the period from about 980 to 1015.

Saint Vladimir ruled the Slavic state known as “Kyiv Rus”, which the Russians consider their first empire. Kievan Rus’ was located in the present capital of Ukraine, Kiev. Saint Vladimir’s conversion to Christianity in 988 gave rise to the idea that Russia would become the “Third Rome”, heir to the Roman and Byzantine empires, which fell after the surrender of Constantinople to the Ottomans.

This is why many Russians, like Putin, see “Kyiv Rus” as “the cradle of Russian civilization”, and Kyiv as the “mother of Russian cities”.

Some scholars believe this obsession with ancient history is why Putin, often seen as a clever manipulator, made the biggest miscalculation of his career by invading Ukraine, the “reckless” move that brought together Ukrainians, Europeans and the rest of the world against him.

History is key to understanding Putin’s view that Ukraine is not, and cannot be, a separate country and “was not independent at all.” Putin made this clear in a speech on February 21, three days before the invasion, and in a 6,800-word essay in July 2021 titled “On the Historical Unity of Russians and Ukrainians.” In this article, he travels back over 10 centuries to explain why he is convinced that “Russians and Ukrainians are one people, all one.” He stated that it must be understood that Russians and Ukrainians, along with Belarusians, “are all descendants of ancient Rus, which was the largest country in Europe.”

Kelly O’Neill, a professor of Russian history at Harvard University, believes that Putin’s historical approach is to convey his strong belief that Russia is an independent civilization and does not share much with the West, explaining that this approach is a key element. of the “Eurasian” imperialist ideology that extends its life by more than a year of 100 years.

O’Neill argues that Putin’s reluctance to fully integrate modern Russia into the global economy, aside from selling much of his oil and gas to it, is based on the Eurasian belief that “Russia and its sovereign territories are economies distinct from the whole empire.”

Foreign Policy explained that this also has deep roots in Russian history, pointing to the Russian belief that Orthodox Christianity is superior to liberal Western Christianity.