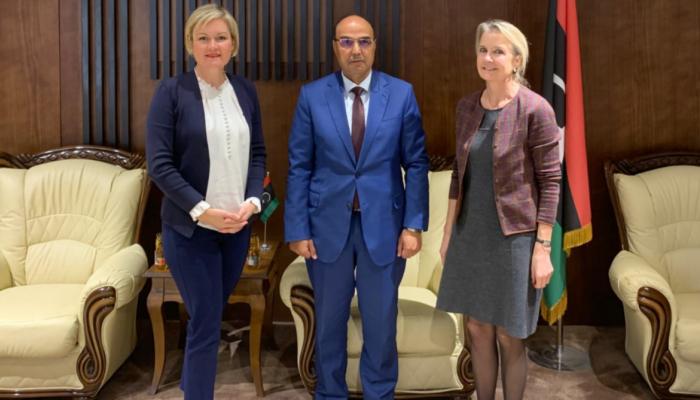 The British diplomat, who sparked outrage in Libya months ago, said in a tweet published by the British Embassy in Libya that she had begun a visit to the eastern Libyan city of Benghazi, her first, expressing her hope that it would be the beginning. of many visits to the region.

Ambassador Caroline said she hopes to visit eastern Libya and noted that her mission in the African country is to strengthen relations between the two countries.

British diplomacy called on all parties to participate in the efforts of the UN envoy to Libya, Stephanie Williams, to lead the political process.

The visit comes two days after the UN envoy to Libya, Stephanie Williams, announced the end of the Tunisian consultations, which were boycotted by Parliament as a parallel track.

In addition, Libyan political analyst Kamel Al-Marash told “Al-Ain News” that everyone is aware of the failure of Williams’ consultations and his attempt to return the path of settlement to the starting point.

He pointed out that the British position has begun to change, since London seeks that Libya’s oil and gas exports are not affected in this critical circumstance that the world is going through.

The Libyan analyst explained that the first visit of the British ambassador to Benghazi indicates her country’s conviction about the right of parliament to enact electoral laws and change the government in Libya, and the abandonment of support for Abdel Hamid Dabaiba, the outgoing prime minister , who remains committed not to hand over power to his successor, Fathi Bashagha.

The visit also comes after months of crisis caused by the British ambassador with a controversial statement, issued at the end of December, in which she declared her support for the continuation of the outgoing Dabaiba government, which infuriated Libyan deputies and led them to demand in a session dedicated to responding to him, since British diplomacy is an unwanted person.

The visit, during which the British ambassador tries to reform her previous positions and appease the Libyan parliament, according to Libyan analyst Kamel Al-Marash.

Al-Marash considers that this visit takes place under the direct guidance of the British Foreign Office to the minister after her “controversial” statements, and her direct intervention on the issue of who approves the constitutional norm and who approves the adoption of a new government.

The Libyan analyst explained that after harsh criticism from Parliament, Great Britain tried to correct its positions, fearing the wrath of the Libyans, who, provoked by the ambassador’s statements, tried to ensure that oil supplies were not affected, especially in a time when The oil and gas market suffers from a shortage of supplies due to the boycott of Western countries to oil and gas from Russia, in the context of the conflict in Ukraine.