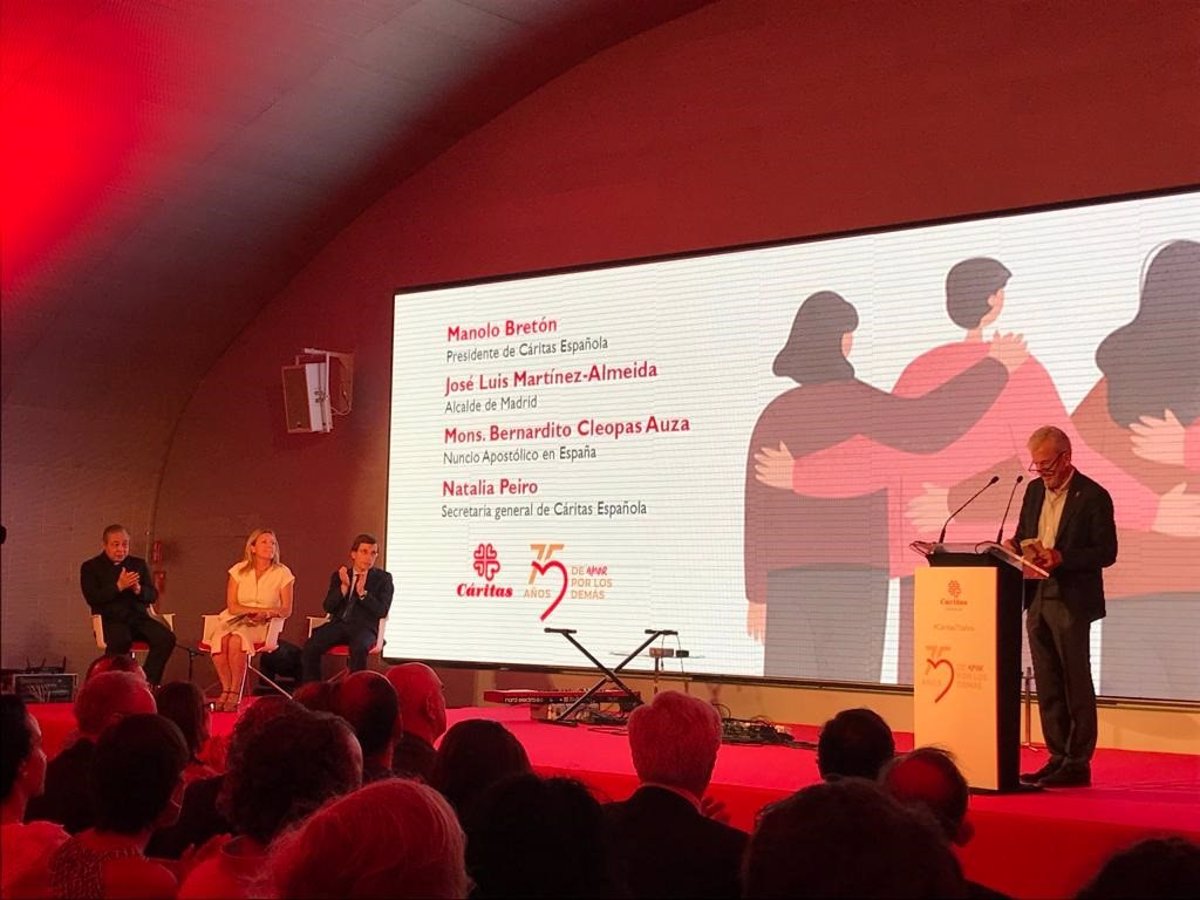 The Mayor of Madrid, José Luis Martínez Almeida, has acknowledged and thanked the work of Cáritas in “very complicated” situations such as the Covid-19 pandemic or the Filomena storm and in the face of “so many needs” that public administrations cannot reach.

“In Madrid we know what we’ve been through, very complicated situations like the pandemic or Filomena, Cáritas has always been at the bottom of the ravine. Who we called to help us was Caritas,” the Mayor of Madrid revealed Wednesday during the celebration of the 75th anniversary of Caritas Española, held at the Matadero in Madrid.

His words, Almeida said, could be summed up as “thank you.” “There is not much more to add, because what prevails towards Caritas is a feeling of gratitude,” he emphasized, adding that if someone were asked on the street if they knew anyone who had ever had contact with Caritas, they certainly would say yes.

Almeida also gave a special thanks to the President of Cáritas Española, Manuel Bretón, who was “excited” to be able to open this event.

Bretón thanked all volunteers, workers, partners, donors, collaborating companies, administrations and other NGOs without whom they would not have been able to fight against “situations of social injustice”.

As Bretón said, in these 75 years there have been so many people dedicated to Caritas that “they would not even have entered the Wanda Metropolitano”. For the mayor of Madrid, what would not enter the stadium is “the heart of Manolo Bretón”.

The President of Caritas also remembers the Ukrainian refugees who fled the war in his country due to the invasion of Russia and the migrants who died at the Melilla fence last Friday – at least 23 according to official data from the Moroccan authorities – – who “a few days ago gave up their lives at the gates of the long-awaited passage to freedom”; and migrants from other “forgotten” countries, where Caritas also provides help.

Also speaking at the event was His Holiness’ Nuncio to Spain, Bernardito Auza, sharing his experiences with Caritas when he was Nuncio in Haiti and the terrible earthquake that occurred in 2010 that killed more than 300,000 people.

Caritas, he recalled, coordinated the projects and emphasized “not only his major contribution to relief and reconstruction work, but also his great sensitivity to local sensitivities”.

For her part, the Secretary General of Cáritas Española, Natalia Peiro, stated that “mixed but complementary feelings come together in her heart: on the one hand, the weight of responsibility, plagued by respect for Cáritas, which arises from this review of many people who have lost their lives spent with many difficulties and struggles” and “on the other hand, the relief of feeling accompanied”. “There are many people who make this story possible,” he emphasized.

During the ceremony, presented by Cadena 100 announcers Javi Nieves and Mar Amate, volunteers, religious, Cáritas managers and others involved in the Church’s social work gave a brief overview of the main ones Milestones that Cáritas has experienced over the past few years 75 years of Spanish history.

After this institutional act, the commemorative events will continue next Friday, July 1, with a Mass of Thanksgiving in Almudena Cathedral, presided over by Carlos Osoro, Cardinal Archbishop of Madrid and Vice-President of the Spanish Bishops’ Conference (CEE).