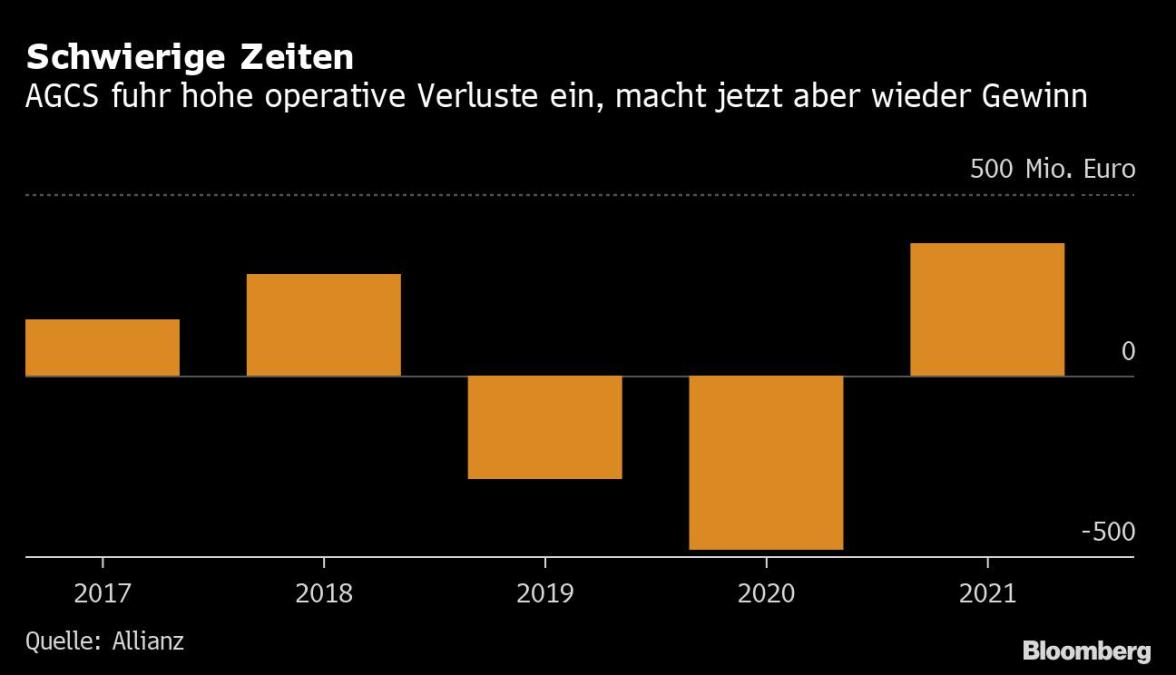 (Bloomberg) — Allianz SE’s industrial insurer, long a troubled child of the group, wants to get back strong after its restructuring. Joachim Müller, head of Allianz Global Corporate & Specialty (AGCS), announced new business this year for around a quarter to €1.4 billion in an interview with Bloomberg. He had previously cleaned out the portfolio and, for example, reduced insurance exposure for auto recalls.

“We want to grow globally in all markets, depending on the opportunities that arise in the respective region,” explained Müller. He sees potential in property insurance in North America and Asia, among other things. Müller is striving for a stronger position for AGCS, especially in China. Here the Allianz division wants to expand its relationships with major Chinese companies and local insurers.

Müller described entertainment insurance as an interesting niche. In this area, AGCS had disbursed around 500 million euros to clients due to the pandemic, for example because concerts were canceled or filming was interrupted. However, Müller sticks to this segment.

“In the live area, the event calendars for 2022 and 2023 are fuller than ever. That should soon be reflected in premium income,” Müller said. In addition, the rise of streaming services is causing an increase in television and film productions, from which AGCS wants to benefit. Pandemic risks are excluded in all new contracts, and loads are no longer expected here.

After operating losses totaling three-quarters of a billion euros in 2019 and 2020, AGCS returned to profitability last year with a plus of €366 million. New business amounted to €1.1 billion.

The goal is profitable growth. “We’re aiming for a combined ratio of 96% over the cycle with a maximum deviation of 3 points up or down, in good and bad years,” Müller said. The value had been above 100% for a long time. Simply put, a rate over 100% means an insurance company is losing money. In 2024 the rate should be above 95%, this year it should be just below 97%. Müller: “We are on the right track to achieve our goals.”

To get there, AGCS began a conversion program in 2020. It pulled out of markets where it didn’t see a leadership role, including US agriculture and Canadian mid-cap business. It also cut out areas with very high exposure and cluster risks. “For example, we disproportionately had insured car recalls. That can’t be healthy, we changed it,” Müller said.

With segment exits and commitment reductions, AGCS had also given up €700 million of annual premium income.

To make AGCS profitable, Müller not only realigned the portfolio, but also changed the structure of the business. What started as more than 30 national companies has now grown into six regional “hubs”, as Müller calls it. And also: “We have eliminated management levels, which makes us faster and cheaper.”

The number of employees will go from 4,600 in 2020 to 3,900 in 2024 and, according to Müller, half has already been reached. Processes would be automated and fewer employees would be needed. However, this is largely balanced through natural fluctuation. The bottom line is that triple-digit millions are being invested in technology and data at the same time.

AGCS remains cautiously involved in cyber insurance. “There is extremely strong demand for cyber insurance,” Mueller said. At the same time, the damage would also increase. In 2016, AGCS was involved in less than 100 claims, in 2021 already around 1,000. “Of course, the insured portfolio has grown over the years. But it is also the case that dynamics are increasing on the claims side,” Müller said.

(New: Exclusion of pandemic risks in the 4th paragraph)