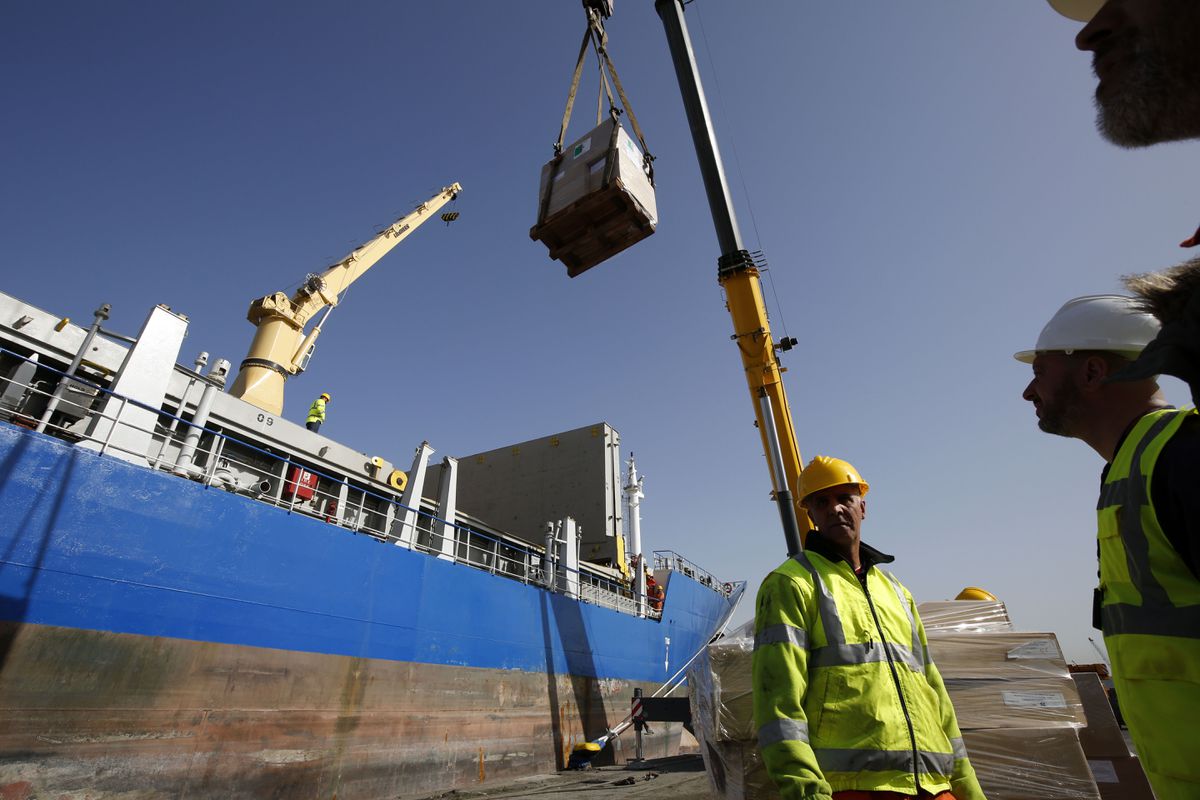 After a month and a half with Spanish goods stranded in Algeria’s ports, pressure from Algerian businessmen on their government has resulted in the unblocking of remittances between the two countries’ banks, ordered on Thursday by the professional association of Algerian bank and institution financiers. The freeze on bank flows was one of the reprisals taken by Algiers in response to Pedro Sánchez’s executive decision to abandon the traditional Spanish position of neutrality in the Western Sahara conflict in order to adopt Morocco’s theses.

The decision aims to restore commercial exchanges between Spanish and Algerian companies, which have suffered particularly from the blockade. The President of the Algerian-Spanish Commercial and Industrial Circle (CCIAE), Djamel Eddine Bouabdellah, assured the Efe agency this Friday: “I think there has been an arbitration procedure to assess the situation because many Algerian companies have also suffered, in particular those importing industrial and food material”. Bouabdellah points to “a return to normality” and expresses a wish: “We have to put political feelings aside in order to see the economic reality.”

During the blockade, several Algerian factories had to reduce their production rate due to lack of components, threatening hundreds of jobs. Analyst Otman Lahiani sees the measure as an answer to Algeria’s industrial needs. “More than a gesture towards Madrid, the decision to allow bank transfers with Spain is a defense of the country’s interests, since some companies have been harmed by the lack of Spanish parts and raw materials,” he specifies. However, Lahiani believes that “the crisis is still open”.

This is confirmed by a source close to the Algerian government: “Confidence in the Spanish government has been broken. The damage done has not been repaired.” Faced with the impossibility of complying with the Algerian request to return to a neutral position in the Sahara, the Spanish government has tried to ease tensions, sending friendly signals and avoiding new controversies. In Algeria, comments by Economy Minister Nadia Calviño in June, in which she attributed the suspension of the bilateral agreement to pressure from Russia, were very bad.

The Spanish government hopes that lifting the blockade will be the first step towards reconciliation with Algiers. In a first official reaction after the announcement, Foreign Minister José Manuel Albares expressed confidence that commercial relations between the two countries, which were frozen on June 8 after the Algiers decision, will be “normalized” to suspend the Treaty of Friendship, Good Neighborhood and cooperation with Spain. “We hope that the activation will take place locally,” added Albares. The Algerian executive immediately expressed anger at the change in Spanish position on Western Sahara: I only have a few hours to call their ambassador in Madrid, Mohamed Antar Daoud, who was appointed as the new Algerian delegate to France two weeks ago .

When Pedro Sánchez’s government learned of the economic retaliation, it immediately called for EU intervention. Positioned in favor of Madrid, the European Commission reminded Algiers that obstructing bilateral trade with Spain would constitute a violation of the treaties with the 27, prompting the Algerian government to propose a reverse course that was not confirmed until last Thursday.

Spanish businessmen, who have seen their deals with the North African country frozen, have greeted the news of the release with optimism but caution. “The reaction was immediate. Our customers didn’t stop calling us all morning. We are happy, but it is about Algeria and we have to take it with caution,” says Job Pero, General Manager of Barcelona PMS International, a distributor of chemical products, among others. They had considered bringing back the product of three expeditions that remain stranded in the Algerian port, but after receiving the notificationhave decided to wait to be able to publish it between Sunday and Monday when the measure is likely to start being noticed.

In addition to the bank release, two orders were also lifted that caused major problems for trade with the African country. Early resale and distribution companies (but not manufacturers or processors) were required to bank and deposit 120% of the import value 30 days before shipment, which Pero says was “brutal to operability. The abolition of the second means the removal of the right of veto for products categorized under the label “Other”, a kind of code that includes a large part of the goods and the prohibition of which has caused many organizational difficulties even among the Algerian officials themselves.

Spanish exports to the country amounted to almost 3,000 million euros in 2019 – the last reference year in which it was not affected by the coronavirus pandemic – 1% of the total. According to the Secretary of State for Trade, semi-finished products (more than 1,100 million euros) and the metallurgical and automotive industries (605 million and 460 million respectively) stand out among the most exposed sectors. Those who have suffered the worst part of it are those who made their goods in Spain.

Such is the case of Saica, a company that manufactures paper rolls and centralizes around 60% of the nearly €140 million billed by the paper industry in the African country. “The news of the unlocking hit us in the head as we tried to fix the mystery,” says Enrique de Yraolagoitia, the company’s general manager. Around 80% of their production is Spanish, and they still have more than 3,000 tons slaughtered in the port of Barcelona: “Now all the shippers and even the shipping companies that went from Spain to Algeria will have looked for other destinations and origins, It must i.e. the entire logistics chain has to be redesigned. I understand that it will take a few more weeks to get back to where I started.”

- Advertisement -
Share
Facebook
Twitter
Pinterest
WhatsApp
Previous articleWhat does it mean to dream of many large and small snakes? ALERT!
Next articleLove Tarot: romantic adventures and a lot of flirting await these signs this July 30