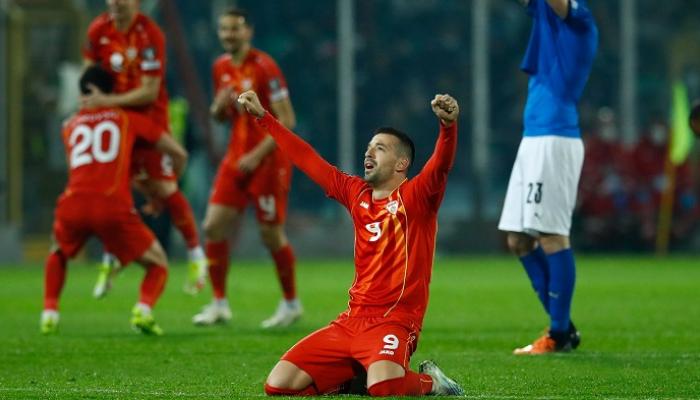 North Macedonia caused a surprise by defeating its Italian counterpart in the European playoffs in the World Cup qualifiers, to prevent it from reaching the 2022 World Cup.

North Macedonia recorded a fatal victory over their Italian host on Thursday night, in the semi-finals of the third court of the European annex, and set a date with Portugal in the final.

The hero of this surprise is striker Alexander Trajkovsky, who scored the only goal in the 90+2 minute of the match organized by the Renzo Barbera stadium in Palermo, Italy.

Trajkovsky, the Saudi player for Al-Fayhaa, knows the Renzo Barbera stadium well, as it is the stronghold of Palermo, his former club.

The irony is that this is not the first time that Trajkovsky has contributed to Italy’s exclusion from World Cup qualifying, as he played a role in their absence from the last version, “Russia 2018”, and was a player at the time. in palermo

The Italian team hosted Macedonia on the penultimate matchday of the 2018 World Cup qualifiers group stage, and after the hosts advanced through Giorgio Chiellini’s goal, Trajkovski scored the equalizer nearly a quarter of an hour before the end.

With this tie, the Macedonian team achieved a point of honor by ending their promotion aspirations, while the calculations of the Italian team were complicated, since they failed to reserve the first place in the group that their Spanish counterpart did.

At that time, the Italian team had to enter the play-off phase, and then lost their promotion ticket after losing to Sweden.