Alejandro Flores, the forgotten violinist: a tale of music and job insecurity 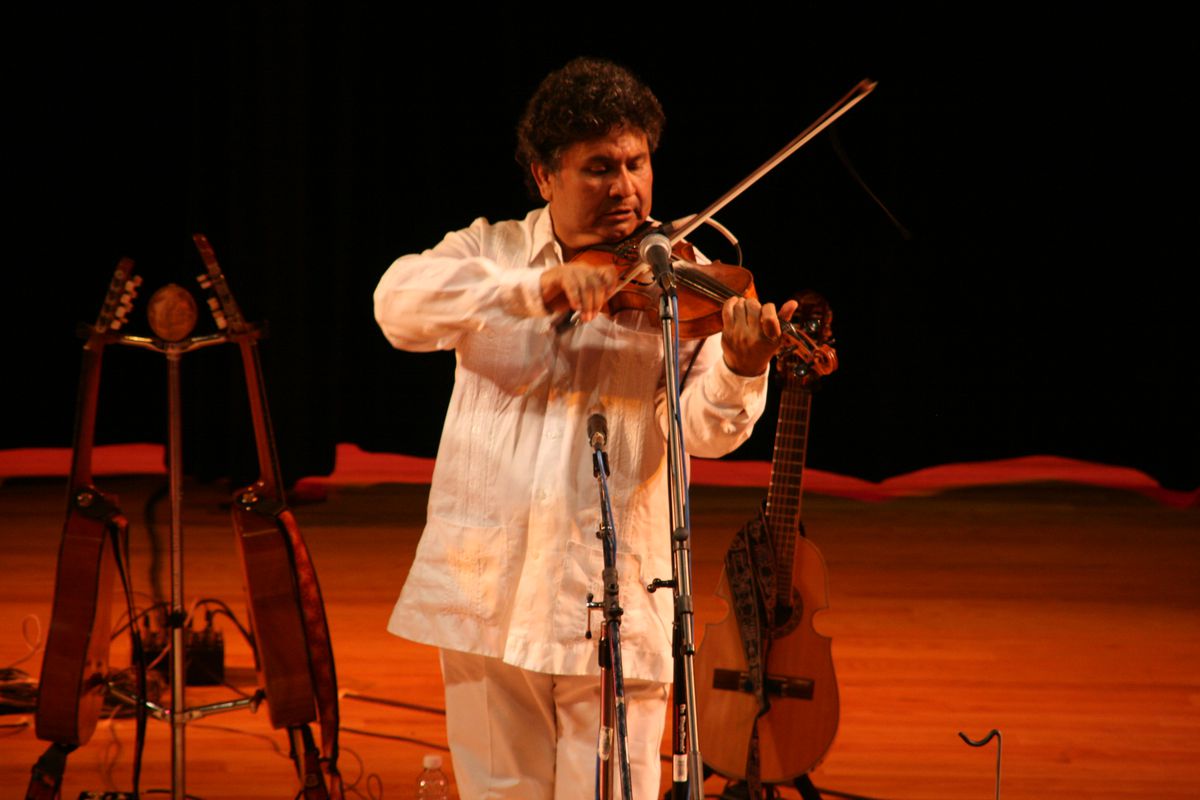 Child violinist Aníbal Hernández’s dream came true thanks to his talent and a YouTube video in which he said: “We would like to dedicate this Huapango to Mr. Alejandro Flores from Café Tacvba… I hope it rains coffee and my dream is to play with them”. He and his father Iván Hernández, who form the duo León Huasteco, were invited to take part in the 30th anniversary tour of the Mexican group Café Tacvba. For the band’s fans, it is a happy and euphoric moment of the concerts. It is an injustice for the musician Alejandro Flores Betancourt (Morelos, 1959) that he is not compensated financially for authorship of the arrangements of this song and that the group replaces him as a guest musician to perform it on stage. I hope it rains coffee It is one of the great successes of Café Tacvba, it is based on the original by Juan Luis Guerra and reinterpreted as a traditional son thanks to the involvement of Flores.

This grey-haired man falls silent for a moment as he hears what he is about to ignore. But his memory is stubborn. He nods back to the days when music, his faithful companion, was his sustenance, but he also looks back with a mixture of sadness and anger. Alejandro Flores was the young man with a thick complexion, curly hair and a loose smile who hugged Rubén Albarrán at the end of the Huapango version Flower in which Cafe Tacvba Unplugged 1995 after singing and playing violin and jarocho requinto.

“I want to play and survive what I do,” Flores says in an interview with EL PAÍS, via video call, because he got covid for the second time. He stopped playing at Café Tacvba 13 years ago, but the wound hasn’t healed. He also regrets not receiving the royalties that are due to him, He claims he received unfair payments for every concert. “4,500 Mexican pesos for each presentation [alrededor de 219 dólares]“.

“The idea was mine, in the end I contextualized the lyrics and the music [de Ojalá que llueva café]. It’s an arrangement of mine that they didn’t record. [adecuadamente]. They left it there,” says Flores. However, the instrumentalist insists that he will not file a lawsuit. “But the knowledge has to be there that it wasn’t right,” he says.

Under the federal copyright law in Mexico, “the person who participates in the realization of a musical work for consideration is entitled to payment of any royalties generated by the public performance or transmission of the work.”

Only for the plays on Spotify – around 28 million – the song of the album avalanche of success generates a profit of 89,600 dollars, i.e. around one million 840,000 pesos, if you take into account the unit of account used fee calculator [0,0032 dólares por reproducción] to determine the income of artists and musicians through the Swedish company stream. version of Flower from not connected of 1995, in which Alejandro Flores plays the violin and sings, collects 5 million reproductions on Spotify, that is 16,000 dollars or 328,711 pesos in earnings. Coffee Tacvba earns $179,000 a year, or more than 3 million pesos, or $15,000 a month — 308,000 pesos — on Spotify, according to Royalties Calculator.

“What do you think of these figures?” the violinist is asked. He pauses before answering.

-It makes me deeply sad because this is happening in Mexico that they are using you and no one is on your side. she [Café Tacvba] They don’t see you as an artist, someone who generates ideas.

Alejandro Flores Betancourt was born in 1959 in Emiliano Zapata (Morelos). At the age of 12 he moved to Mexico City and by the age of 17 was recording the sounds of regional musicians from different areas of Mexico, a collecting work that continued years later. He founded the Painani project for Argentinean and Chilean music and was a member of Zazhil, a group that accompanied the Mexican singer-songwriter Amparo Ochoa (1976-1994), with whom Flores made his first musical arrangements. In addition to his 16-year accompaniment of Café Tacvba, he has worked with the Kronos Quartet, Los Lobos, San Pascualito Rey and Mexrrisey. He has three albums as an independent musician in a genre he calls “progressive son” and leads the group Extráñame María.

Despite his career, he struggles every day and does not make a living from music. “I need shoes, clothes, I need transportation or going to a meeting. Everything implies having money. I don’t take the subway or the bus because I don’t have the money to go for a walk anywhere. The only one who supports me is the woman I live with, she is my partner,” says Flores Betancourt.

“In the past, musicians’ prestige was based on underestimating other personalities they consider themselves no musicians, for example the “Biergeiger” – people who couldn’t read a score, performed for farmers and, according to Wolfgang Caspar Printz, were happy to be paid with alcohol –”, reflects Eduardo Huchín Sosa, musician, in an interview with EL PAÍS. Writer, magazine editor Free lyrics and author of Shut up and listen. Essays on Music: from Bach to the Beatles (Turner, 2022).

“In the 21st century, we’re still debating who is a musician and who isn’t: it depends on where you studied, what the school or institution is like, what accreditations you have,” explains Huchín.

“There is a very big gap in between superstars, these are very few, and the rest are good musicians. And that has nothing to do with quality. There is a group of people who make very good money as musicians and those who follow them who are very good, the separation is immense. This inequality persists,” he adds.

“Do you think that you have been the victim of any kind of discrimination by Café Tacvba?” Alejandro Flores is asked.

I think it’s discrimination. [cómo fui tratado]’cause they don’t see you for what you are, for the musician you are, because he’s a guy who makes huapangos; There are a lot of people doing huapangos and he’s a guy who, what can you do to him, he’s from the country. They never bothered to say, “This guy dedicated himself to studying the music of Mexico.”

“He was just a collaborator”

the author of the official history of Café Tacvba, dance alone (Planeta, 2016) Enrique Blanc considers that Alejandro Flores was not the “fifth tacvbo” as he was popularly known when he joined the group – formed by Rubén Albarrán, singer; Joselo Rangel, guitarist; Quique Rangel, bassist; and Emmanuel del Real, keyboardist—. “The fifth tacvbo was Balbi [Juan de Dios Balbi, exrepresentante de la agrupación]because he was very affectionate. Also, Alejandro had a very special moment [en los conciertos] where he appeared and then disappeared, that means I see him primarily as a collaborator,” says the music critic in an interview with EL PAÍS.

For Blanc, the violinist must have hinted at the issue of earnings from the very beginning of his relationship with the group. “We don’t really know how far along an arrangement is or how far along he’s replicating an arrangement with his instrument. It’s complicated,” he says. “First of all, I would think that it’s not his project,” he emphasizes.

This newspaper contacted Café Tacvba through its representative Pablo Txino García to get the Group’s point of view on Alejandro Flores’ comments. Although García did respond to an initial email, he has not responded to subsequent emails, nor to the messages sent to his social media accounts.

The rapprochement between Alejandro Flores and Café Tacvba took place before the first not connected the group in the 1990s. “He turned up by accident. Before that he played with Amparo Ochoa and she had just died. And it turned out that he was a folk musician, a great artist,” recalls Emmanuel del Real, memes, in the book by Henri Blanc. “He’s a star, the guy is a person who has so much energy,” describes Del Real.

“We thought he [Alejandro] I didn’t want to arm her with the violin the dance and the ballroom, that we needed another studio violinist who would move him to another genre of music, so we invited Antonio Franco. And when they met, Alejandro came and said, “What about you?” And Franco replied: “I play with the symphony”. And Alejandro: “Well, I played with Amparo Ochoa”. And he asked him: “And do you know how to play huapango?” to which Franco replied: “Yes, of course, the one from Moncayo”, Rubén Albarrán relates in the book the meeting between Alejandro Flores and Antonio Franco, Lazlo Lozla, another violinist who also took part in the Cafe Tacvba Unplugged from 1995.

Flores says that Quique Rangel, the group’s bassist, called him a few years ago. “There was a day when Joselo’s brother spoke to me and said, ‘Hey, let’s see if you give up your rights to what we’re doing.’

-And what did you answer?-