Alarmed before a hundred drowning deaths: “In Spain we can float, but not swim” 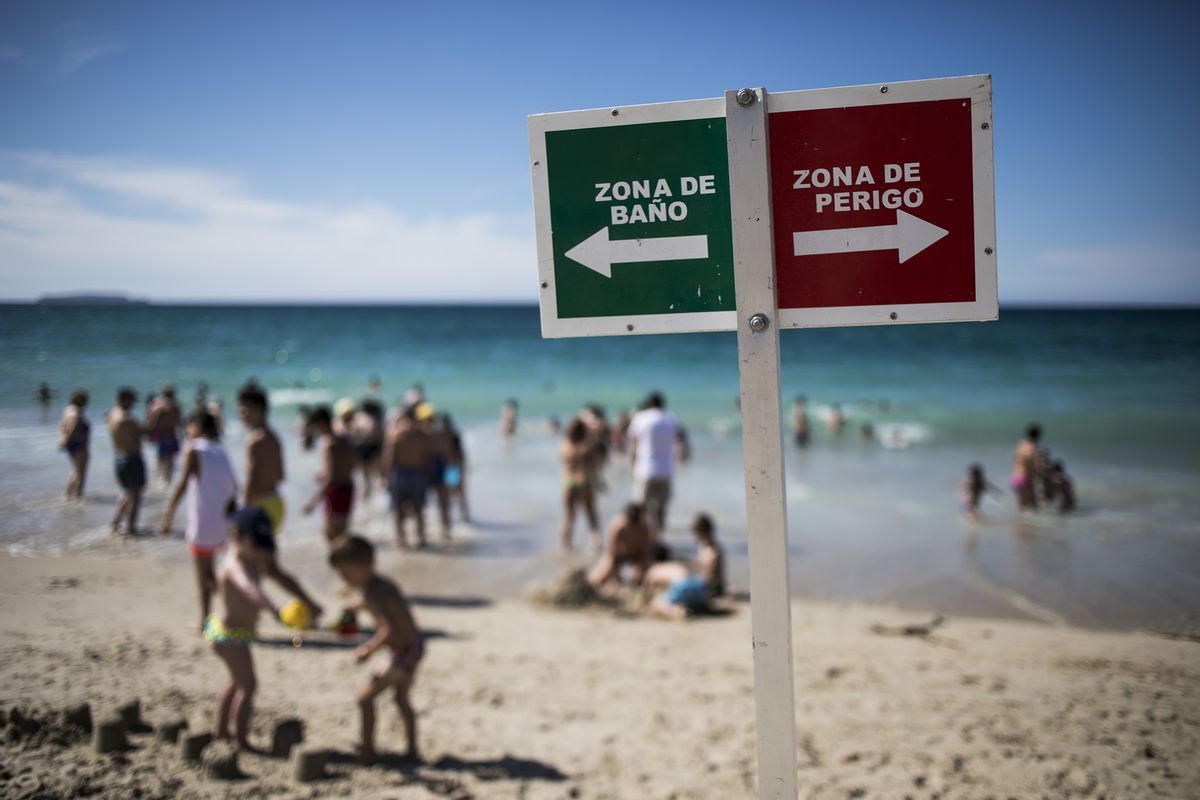 Seven people drowned in Spain last weekend and it’s not an isolated tragedy. The count for the first 12 days of June was 19 deaths from this cause, bringing the Rescue and Lifeguard Federation registered tally for 2022 to 102 deaths compared to 66 in 2021 at the same time on the calendar. We are heading for another year like 2020 with more than 350 deaths in aquatic spaces and the latest generation drone that will surely be in the news every day as the new lifeguard is not going to change the trend although it might be useful, according to experts.

“Resources will always be limited. We must make people aware of the dangers. We have to inform without sounding the alarm,” stresses the aquatic safety expert Ramsés Martí. Administrations, he stresses, have a duty to protect and inform, but citizens have to listen and learn. “It is impossible to protect a society that is unaware of the risks it faces and that does not share responsibility for its own security. Drones, artificial intelligence, dogs…everything can help, but we will never be able to reduce the phenomenon unless we connect the population. Let’s prepare minors for safety behavior and educate adults,” he demands.

Francisco Cano, Director of Prevention and Safety for the Spanish Federation of Rescue and First Aid, approves the recipe. “It is important that information reaches society as clearly as possible. Many people do not know what the color of the flag means, what rip currents are, or misinterpret danger zone markings. Information campaigns are needed and prevention and safety are included in the school curriculum, not only in the water world. In addition to fines, information is needed,” he emphasizes.

The Role of Schools

When Èric Nievas, delegate of the CGT of Socorristas de Barcelona, ​​​​sees certain bathers in the water, he worries. “Many people swim vertically in water and use a lot of arm strength to stay afloat, while they need to move horizontally to be efficient and not get tired,” he explains. Nievas has six years’ experience as a lifeguard on the beaches of Catalonia and believes many bathers don’t go beyond the most basic of swimming ideas. “In Spain you can swim, but you can’t swim,” he specifies. The lack of water training along with various and numerous factors, he says, determines part of the increasing drowning on the Spanish coast.

It doesn’t seem easy to know exactly the average swimming level of the Spanish population. And this, understands Frederic Tortosa, president of the Catalan Lifeguard and Lifeguard Association, limits public rescue policy. “In schools, goals are set by course and subject,” he compares, “but since swimming isn’t part of the school curriculum, we don’t know what level young people are at, and without that data it’s difficult to know if Spain is swimming well.” . But the level is lower than it should be,” he stresses. Tortosa gives an example: if there were an age when youngsters were guaranteed to be able to swim 200 meters at a stretch, then some of the aquatic mortality would be limited. Knowledge of the aquatic environment and the ability to respond to emergencies are also factors that influence drowning, Tortosa says.

If swimming is not compulsory in schools, where can you learn to swim? “Now it depends a lot on the involvement of families and the willingness of the training centers,” replies Fernando Sánchez, President of the Andalusian Rescue and First Aid Federation. Many schools offer courses organized by the Mothers’ and Fathers’ Associations, although they have no academic weight and are not compulsory. “This can lead to a socio-economic bias in access to learning,” warns Victòria Morín Fraile, researcher in education and health promotion at the University of Barcelona. There are centers that include swimming in school hours, but others do not offer the option to add water for hours. “Without the guarantee of the administrations, there is a risk that children with lower economic capacity will not have access to swimming lessons,” emphasizes the researcher.

Morín points out the contradiction of having a lack of aquatic knowledge in a land of the sea. “Health promotion must make use of the environment itself,” he says. And he points to the habits of the population of the Pyrenees, where schools generally teach skiing due to their proximity to the slopes, which is mostly not the case in coastal schools. “Going into the water is recommended for physical activity and health,” says the researcher. He believes that administrations should encourage, for example, “cooling at sea” to brave the heat, but also guarantee safe access. Nievas, of his lifeguard post, agrees with the analysis: “It is strange that in a country surrounded by the sea swimming has no more power.”

As well as the obvious need to learn to swim to prevent drowning, both agree that given the number of accidents we face, further training is needed. “You have to learn how to act in the event of an accident. You have to alert the emergencies as soon as possible because they have their reaction time, you have to get the injured person out of the water and perform basic life support maneuvers. It’s very important that people know how to help, it’s vital,” emphasizes Martí. In this plot, schools can play a major role by concentrating all the minors. “Even five-year-olds can be taught what number to call when they are in danger. “You have a mouth, a nose and two eyes, so you dial 1-1-2,” you tell them. A 12-year-old boy, both physically and mature, is already capable of performing chest compressions on an unconscious person who we believe is not breathing,” he says.

The shortcomings of the administration

But all this does not change the obligations and shortcomings that the administration has. “We detect a certain apathy when there is no inaction on the part of the administrations. You have to inform society and also provide funds. It’s impossible to have lifeguards everywhere, but there should be better care,” stresses Cano.

With the data from his association’s report for the month of May, he also criticizes the delay in deploying the safety devices. “We sell tourism and climate all year round, but there are no services. There are administrations for which the summer campaign starts in June and in May there were already 30 deaths. Once a day,” he denounces.

Both he and Martí also claim a common minimum on the beaches. “There is no government regulation that specifies how a beach should be monitored. Only the Canary and Balearic Islands try to bring some order, but beaches with the same conditions can be monitored differently. Not even the lifeguards will be dressed the same,” Martí illustrates.

The same thing happens in training. “The requirements for lifeguards are completely different between some autonomous communities and others. This is creating a movement of lifeguards to where it is easier to get the title and there are others who are struggling to find candidates,” Cano warns.

Drowners also have a gender, in this case basically male. “Traditionally, and I’ve been working on this for 25 years, men have drowned twice as often as women,” confirms Martí, who concedes that they have a “poorer” risk awareness, but emphasizes the lack of studies on the subject. It also points to another possible cause. “I think more girls have signed up for swimming lessons,” she dismisses. The trend in this statistic is growing only this year. By May, male deaths accounted for 83% of the total and of the 7 drowned last weekend, 6 were male.

A fence, a card around the neck for parents, and more tips to avoid child drama

Of the 30 drowning deaths in May, 4 were of children under the age of six, which certainly could have been avoided and are among the most painful. “Infant drowning can by no means be assumed to be inevitable because it could be zero,” notes Ramsés Martí. The reason is simple: “You rely solely on adult supervision,” he notes.
The first measure to avoid this is also very simple. “The World Health Organization is very clear: access to water must be avoided. Swimming pools should have access control even if they are private. At present, we are handicapped by anyone being able to go to a hardware store and build a sizeable swimming pool at home. What you need to do is control access,” he says. This can be a simple fence, which is mandatory in France, for example.
The second big measure is “obvious”, he emphasizes, “learning how to swim”, but not only in relation to “swimming and moving around”, but also in relation to behavior in and out of the water. Martí also encourages these schools to take a step that they have not wanted to take before. “The chip has to be changed. Swimming is not just a sporting activity, it should be viewed as a survival skill that you should devote time to. There are no centers that want to throw clothed children into the water and swimming with clothes is not the same as without clothes,” he gives as an example.
Reminding that minors must always be “under adult supervision” when in the water, this water rescue instructor makes it clear that not even a child under the age of seven should look after one in five, nor are all adults willing to do so. “A very old person or with mobility issues may not have time to help in those 20 seconds that a minor can drown,” he says.
The problem of oversights, to which he proposes a very graphic solution, is spreading among those who can call the shots. “The ‘But weren’t you watching him?’ because we are in a situation of free time, of relaxation. I offer the parents a card, a piece of cardboard. The one who wears it is the one who watches for 20 minutes because it’s a bit tiring and it can’t last long. This person must not be looking at WhatsApp or being distracted. He doesn’t stop looking until he hands the card to someone else,” he explains.
To finish, some classic advice: toys should not be left in the pools because they attract the little ones and floats should be taken as elements of play and in time for learning, but not for safety. We need to put an end to “is that he wore the sleeves.”

- Advertisement -
Share
Facebook
Twitter
Pinterest
WhatsApp
Previous articleMañueco announces a special plan for the Sierra de la Culebra (Zamora) and, with Sánchez, assesses the state of the fire
Next articleUkrainian prosecutors confirm that more than 320 children have been killed and around 580 injured by Russian attacks in the country

The Whitney Biennial talks a lot and says little