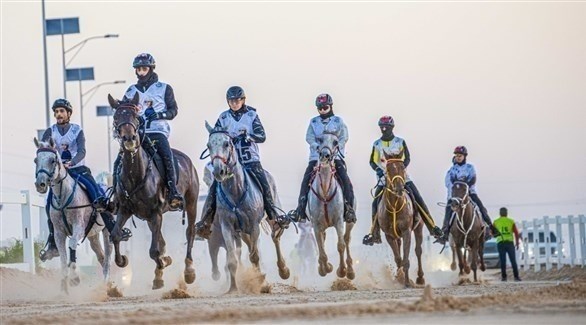 Under the patronage and monitoring of the Deputy Prime Minister and Minister for Presidential Affairs, Sheikh Mansour bin Zayed Al Nahyan, the Emirates Global Endurance Village in Al Wathba will conclude the 2021-2022 season, with the organization of 3 races starting on March 18. to 20

The “Sheikh Zayed bin Mansour bin Zayed Al Nahyan Cup Race for 100km private stables” will be held the day after tomorrow, then the “Abu Dhabi Festival Women’s 100km Race” will start on Saturday, and the season will conclude with the “120 km Abu Dhabi Festival Race” on Sunday.

The season, which featured 11 races, including events, festivals and important races, coincides with the celebrations in the country of the “fiftieth anniversary of the founding of the Federation”, where the registrations to participate in the three races witnessed a great turnout of jockeys, female riders and stables, to distinguish their presence at the end of the season.

The Emirates Global Endurance Village in Al Wathba has also completed its technical and logistical preparations to organize and host the three races, and to provide the right environment for the participants to present their best competitive abilities, in light of the horses achieving the most high. levels of technical preparation and the high level of ambition of the cyclists to achieve titles and crowns.

The town announced the controls for participation, and the need to adhere to the “sanitary protocol” issued by the responsible authorities, in order to prevent the “Covid 19” pandemic and guarantee the safety of all, by carrying out an examination of nasal swabbing, social distancing and determination of the number of people allowed in the veterinary examination area.

Musallam Al Ameri, General Manager of the Emirates Global Endurance Village in Al Wathba, praised Sheikh Mansour bin Zayed Al Nahyan’s support, patronage and monitoring for the events, all races, championships and festivals organized and organized by the village in each season.

Al Ameri welcomed the entrants to all three races at the end of the season, calling it successful, saying: “The entrants’ cooperation with the race organizing team and their commitment to the organization’s instructions and directives contributed to achieve this success. highlighting the positive interaction of all parties during the competitions since the beginning of the season.

He added that “the village team has finished preparing the entire team to produce the races in the best way, providing what each participant needs, according to the highest levels of quality, arrangement and organization,” and stressed that the team remained in a state of continuous work, and continues to strive until the success of the event.

For his part, the events director of the village, Muhammad Al-Hadrami, assured that “all the facilities are ready to organize and host the three races”, highlighting the early start of the arrangements, and the continuous coordination between the team of job. and the participating and interested parties.

He indicated that the work team dedicated all its time and effort to equipping the village logistically and technically in order to guarantee the safety of the riders and horses and the comfort of the assistance, in accordance with the necessary measures and precautionary measures.