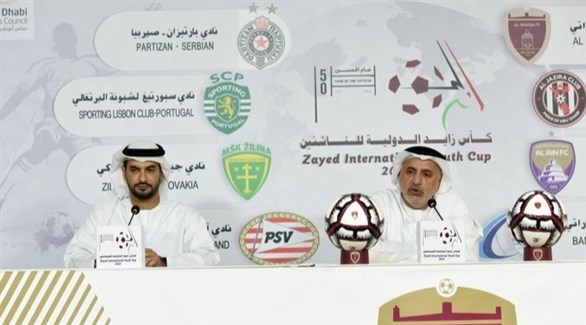 Al Wahda Football Company revealed the organization of the 20th edition of the Zayed Cup for Juniors, from April 4 to 14, under the patronage of Sheikh Theyab bin Zayed Al Nahyan, president of Al Wahda Club, and in cooperation with Abu Dhabi Sports Council.

Eight clubs will participate in the tournament, 4 of which are local: Al Wahda, Al Ain, Al Jazira and Baniyas, along with Eindhoven from the Netherlands, Sporting Lisboa from Portugal, Partizan from Serbia and Jelena from Slovakia.

This was revealed at the press conference, in the presence of Rashid Al Zaabi, President of Al Wahda Football Company, Chairman of the Organizing Committee, and Abdul Basit Al Hammadi, Member of the Board of the Company, Director of the Field.

Al Zaabi said: “The tournament will be held during the holy month of Ramadan, and we invite everyone to encourage young players to attend the matches. We also hope that all the participating teams will achieve the desired technical achievements, which is the everybody’s goal.” of us. The Zayed Cup for Juniors is one of the first organized courses for juniors, thanks to the support of the wise leaders.” And his interest in the youngsters, and the course successfully continued to bring the Emirates football in general and unity in particular. with talents, thanks to the interest and care of Sheikh Saeed bin Zayed Al Nahyan, and then the successes continued under the patronage of Sheikh Theyab bin Zayed Al Nahyan, and we must not forget that the course featured many players who became stars in the major leagues.”

He added: “We are grateful to the Abu Dhabi Sports Council, headed by Sheikh Nahyan bin Zayed Al Nahyan, for their support of the tournament and clubs in the emirate, and in the Sunni arena sector, where another tournament is being held to under-17 teams during the same session, organized by Baniyas Club, and this makes efforts to integrate between the clubs.”