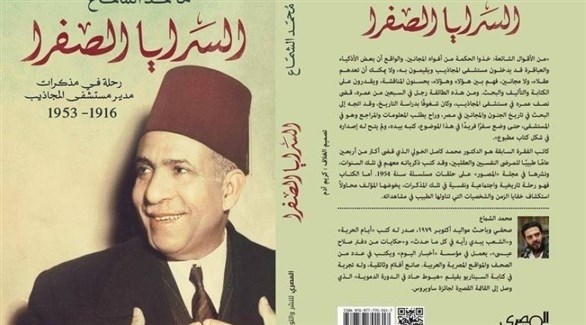 Forty years spent by the Egyptian doctor Muhammad Kamel al-Khouli between the psychiatric hospital in Abbasiya, and after his retirement, he published excerpts from his diaries with patients in a series of articles that may not have received enough attention and analysis at that time. moment, until the researcher and writer Muhammad al-Shamma completed the picture in the book “La Saraya”.

The book is published by Dar Al-Masry for publication and distribution in 216 pages of medium pieces, divided into three chapters with a 25-page photographic appendix and script writing.

The first chapter of the book is entitled “Memoirs”, which is a reissue of the series of articles written by Dr. Al-Khouli in Al-Musawwar magazine from January to April 1954 under the title “40 years of protection of the minds”. “, which are strange and funny and are formulated in a smooth language far from any scientific complications or ambiguous terms so that the reader almost thinks that the chronicler is not a doctor in the first place.

The diaries are surprisingly edited, making it seem like the famous cat and mouse adventures in the cartoon series, and the cat here is the psychiatrist who was patient, slippery, and attacked some posing as crazy until he exposed them. , but sometimes becomes the victim of pranks arranged by patients, which puts him in very embarrassing situations.

Among the most exciting stories in the articles are stories about members of the Alawite family that ruled Egypt for a century and a half, including King Farouk, who was formed an opinion about his psychological state by the veteran psychiatrist after a personal meeting between them. in Alexandria in 1938.

Although the diaries focus on the psychiatric hospital inmates, their stories, and the hospital scenes, it is not without subjectivity, as Al-Khouli spoke in part about his personal life, his upbringing, how he got into medical school. , then his trips to study abroad, and his return and incorporation to the hospital in 1916 until becoming its director and retiring at the end of 1953, which is an important addition to the scarcity of what was published about it in the media.

stories on the side
The second chapter of the book is titled “Historical Tales on the Margin” and includes a great deal of research and investigation in which the author worked to link the Al-Khouli accounts with the historical and social context of these accounts, some of which they were linked to famous crimes such as the assassination of former Finance Minister Amin Othman in 1946, and the attempted assassination of national leader Saad Zaghloul. In 1924 the perpetrators were taken to psychiatry.

The chapter also included documented information on the rise and development of psychiatric hospitals in Egypt, specifically the Abbasid Hospital, which the general public used to call the “Saraya al-Safra” derived from the color of the building, which was originally one of the palaces. of the upper family and was painted red before it was converted in 1883 into a hospital and painted yellow.

From various positions, Dr. El-Khouly brought together English doctors who had long dominated the management of medical facilities in Egypt. The author of the book intends to talk more about the work of foreign doctors in Egypt and its impact. including shining examples of Egyptian doctors who were able to stand out from their foreign peers professionally and ethically.

The third chapter was entitled “Towards a general psychological culture” and also included a great research effort by the author Muhammad Al-Shamma, who read many psychiatric books in preparation for the publication of this book and used many scientific articles and medical journals to address the few medical terms mentioned by Al-Khouli in his articles such as paranoia and psychopathy, and schizophrenia.

It is also about some digression in the book edited by Al-Khouli entitled “Forensic Psychiatry”, which is considered a rare Arabic reference in the link between psychiatry and the judiciary when the medical report of the psychological and mental state of the accused is the final decision. in determining his fate.

The book “Al Saraya Al Safra”, although it seems to be a rediscovery of one of the buried journalistic treasures, represents, in essence, a careful reading of a not brief period of the history of psychiatry in Egypt and presents worthy readings and interpretations of study on the link between mental illness and social, political and economic conditions, especially in times of war and crisis.