Al-Rahi calls for the return of the displaced to Syria 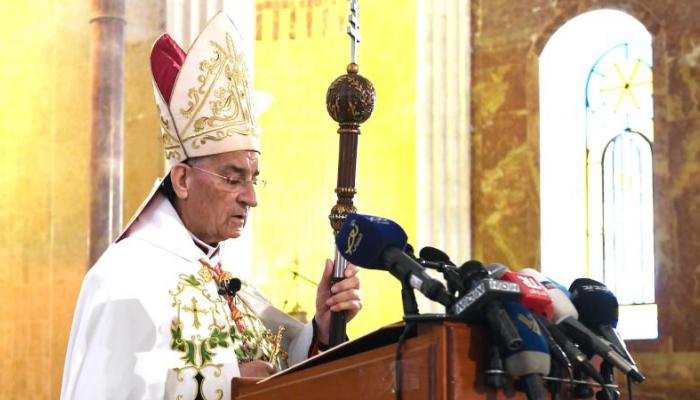 Maronite Patriarch Bechara Al-Rahi stated that Lebanon’s neutrality is based on not entering into alliances, axes, political conflicts and regional and international wars.

Al-Rahi said that this neutrality requires the state to be strong with its army and security services, in order to impose its sovereignty at home and abroad. It respects the sovereignty of other countries and repels any aggression against it with its own forces.

He added: “This neutrality makes Lebanon a message; it stands in solidarity with issues of human rights and freedom of peoples, takes initiatives for reconciliation and resolves conflicts, and works for peace and stability.”

And he continued: “In this way, in the name of humanity and the millions of Ukrainians who have fled to other countries and walk into the unknown with a small suitcase, and in the name of the victims and dead that have fallen on their territory and on the land of Russia, we denounce this Russo-Ukrainian war and demand that it cease”.

He added: “There is no other result of war than killing, destruction, displacement, impoverishment, starvation, destruction of natural wealth, and fomenting hate, loathing, and enmity.”

He explained: “In the name of neutrality, we demand the return of the displaced Syrians to their homeland, to preserve the richness of their land, their culture and their dignity, and to continue writing their history… Their return is linked to a decision Lebanese, Arab and international politics, and their number exceeded 1.5 million, or about 35% of the population of Lebanon at least”.

He added: “The absence of this decision has become a conspiracy against the entity, unity, identity and security of Lebanon.”

He believed that solving the Syrian refugee problem requires urgency, especially with the outbreak of war in Ukraine and the rise of new waves of displacement in Europe and the world.

As for internal Lebanese affairs, Al-Ra’i called, in his Sunday sermon, to reactivate the minimum level of the financial system and control the State’s income in terms of taxes, borders and customs.

Al-Rahi said that Lebanese citizens “suffer, on top of their poverty, unemployment and low wages, banking, economic, commercial and tourist randomness without supervision or dissuasion. It is as if the financial legislation in these sectors is also independent of the laws of the state and the laws of money and credit”.