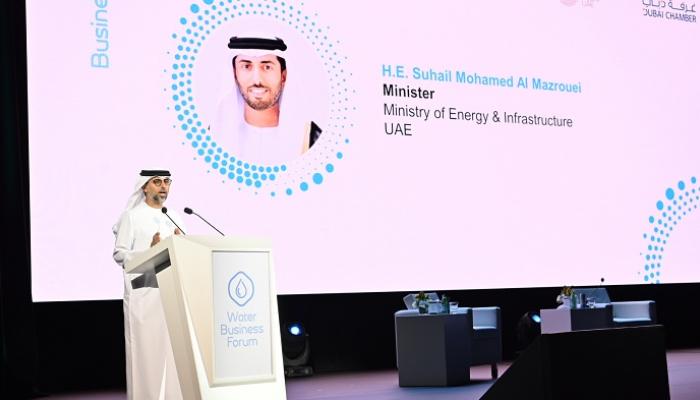 He stressed that water security is one of the main parts of the development system and is a priority for the UAE government.

In his opening speech at the Water Works Forum within the UAE-hosted Water Week activities at Expo 2020 Dubai, Al Mazrouei said: The UAE realizes that water security is the cornerstone of national security, and is of the utmost importance to support its future goals and development path, and therefore, the UAE launched the Watery Security Strategy 2036.

He continued: The security strategy that was formulated from a national perspective to cover all elements of the water supply chain in the country for the next twenty years, as it aims to provide sustainable and continuous access to sufficient and safe quantities of drinking water in light of normal operations and during large-scale emergencies, according to the Emirates News agency.

He added: “The strategy combines priority strategic solutions in an integrated framework, and consists of 3 strategic programs, which are the demand side management program, the water supply side management program and the production and distribution program. The strategy is strengthened through several initiatives related to the development of local water policies, plans and legislation, institutional readiness, capacity building, technologies, innovation and public awareness.

He pointed out that the water demand side management program improves environmental and economic sustainability in the water consumption sectors in urban and agricultural areas, by coordinating and supporting current efforts in the country to reduce losses in the water network. water and rationalize per capita consumption of it to reduce the demand for desalinated water and increase the efficiency of water use Water for agriculture, reduce pressure on groundwater.

He stressed that the Water Supply Management Program will help meet future water needs in a more sustainable manner, and that the UAE is working to separate water production from power generation by using a combination of renewable and clean energy sources to desalinate seawater through reverse seawater. osmosis technology.

He explained that the emergency water production and distribution program aims to guarantee effective prevention and response to water emergencies at the national level, by strengthening the connection points of the water network between the electricity and water authorities and the increase in strategic storage through constructed reservoirs and the restoration of underground ones. reservoirs according to demand and operational needs Develop an integrated plan for response to water emergencies.

He noted that groundwater resources are one of the main sources of water used in the UAE, covering more than 95% of agricultural uses of water.

It is worth noting that the 2036 Water Security Strategy aims to reduce total water demand by 21%, increase the reuse rate of treated wastewater to 95%, increase membrane desalination to 54% of the mix drinking water supply and reduce the non-revenue of water to less than 10%. The strategy will streamline spending by more than 74 billion dirhams, in addition to reducing carbon dioxide emissions from desalination plants by 100 million tons.

- Advertisement -
Share
Facebook
Twitter
Pinterest
WhatsApp
Previous articleAbeer Sabri on the authority of Muhammad Ramadan: “If a woman travels in a private plane, she will be photographed on it.”
Next articleThe EU must do this