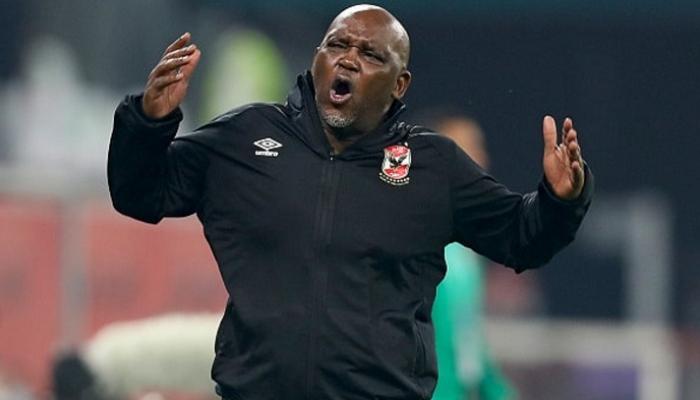 The complaints of the South African Pitso Mosimane, coach of the Egyptian team Al-Ahly, towards the Confederation of African Football (CAF), did not stop.

Mosimane complained during 4 consecutive rounds of the African Champions League about the absence of video technology, claiming that his team “suffered from refereeing errors”.

Before facing Sudan’s Al-Merrikh in the fifth round at Cairo’s Al-Salam Stadium, the Al-Ahly manager addressed his complaint on another matter.

The South African coach told a news conference on Thursday: “I have my reservations about our match schedule in the recent period. No team in Africa is exposed to as much pressure in matches as Al-Ahly, which causes a lot of injuries.”

pointed Bitso Mosimane “Sometimes we miss more than one player in a position, but we managed to overcome the obstacles thanks to the excellent work of the auxiliary staff and the loading scheme,” he said.

He continued: “We played the African Super Match (against Morocco’s Raja) 4 days after the end of Egypt’s participation in the Arab Cup, and started our way into the Club World Cup without our international players to match the tournament with the African Cup of Nations”.

“We also played the first match against Al Hilal (in Sudan), a few days after the team returned from the Emirates (after participating in the Club World Cup),” added Betso.

stressed Al-Ahly manager On the importance of Al-Merreikh’s match, he stressed: “There is no substitute for winning to compete for qualification for the quarterfinals.”

He concluded his remarks: “Pressures are part of Al-Ahly’s life, because the team is obliged to win every match and championship, and I love working under these pressures, and I got used to it from my first day with the team. .”

Notably, Sun Downs qualified for the quarterfinals leading the first group with 10 points, followed by Al-Ahly, Al-Marikh and Al-Hilal (4 points).