Al-Kazemi: The crisis in the formation of a government in Iraq heralds a “dangerous stage” 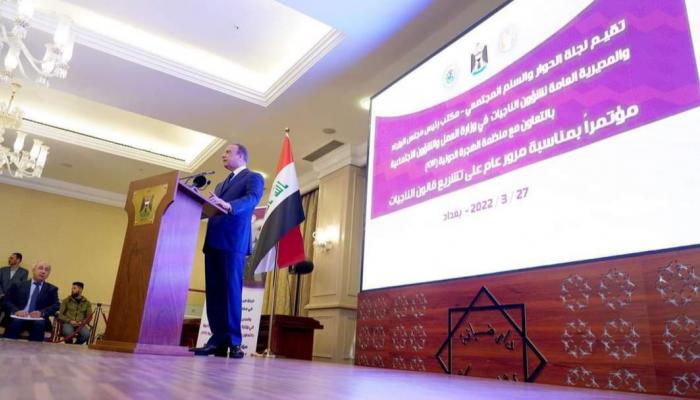 Iraqi Prime Minister Mustafa Al-Kazemi described the political crisis in the country regarding the formation of the government as a “dangerous stage”.

In this context, Al-Kazemi called, during a speech at a conference commemorating the first anniversary of the enactment of the law to protect Yazidi survivors, to respect constitutional times and give priority to the logic of the State.

And he added: “We have to look for logical solutions that reflect the political maturity of all, and reflect a high degree of responsibility of the political forces in terms of their parliamentary or extra-parliamentary functions. We must work, and we must all integrate to cross this dangerous stage” .

The Iraqi Prime Minister indicated that “what is required of the political forces to recalculate, to cross this stage, today there is a global crisis, which is reflected in every part of the world, and in addition to this crisis, our region has many complex crises and intertwined”, reinforcing saying Yes, this scenario is dark, but there is hope, and we can turn the scenario into an opportunity for success and there is an opportunity, and this opportunity cannot practically be translated into a caretaker Government.

He went on to say: “Boldly and without any fear or apprehension, this government stands up and takes responsibility, but this is neither logical nor realistic. The current crisis is political, and a political advance is a government advance, and therefore the need to form an effective productive government that serves the citizen in these circumstances, and build Food Safety and Security”.

Yesterday, Saturday, the House of Representatives failed, for the second time, to hold a session with a full quorum to vote on the candidates for the position of President of the Republic before raising it to next Wednesday.

The coordination framework (parties and militias related to Iran) and some other forces boycotted the parliamentary session, which caused the registration of the attendance of 202 deputies out of 329, which caused the lack of a quorum with the mechanism of three members of the House of Representatives.

And regarding the repeated failure to maintain a quorum nanny, legal expert Ali Al-Tamimi says: “According to the decision of the Federal Court to open the door to the nomination for the position of President of the Republic for one time, No. 24 of 2022, the Parliament has a period of 30 days in accordance with article 72 II of the Iraqi constitution, from March 6 to April 6, during which the President of the Republic is elected in a binding manner.

Al-Tamimi explained to Al-Ain Al-Akhbar that, “After setting the date of March 26 to hold the session, in case the new President of the Republic is not elected, the Presidency of Parliament can postpone it until March 6. of April. The Supreme Court, which authorized the opening of the nomination door only once, and we will be facing an unresolvable ruling.”

The jurist hopes that “Parliament can be dissolved at the request of a third of the members and the approval of the absolute majority of the number of members in accordance with article 64 of the Constitution, or the referendum of the Federal Supreme Court, if this is does to find out the daily constitutional output according to the same previous article.