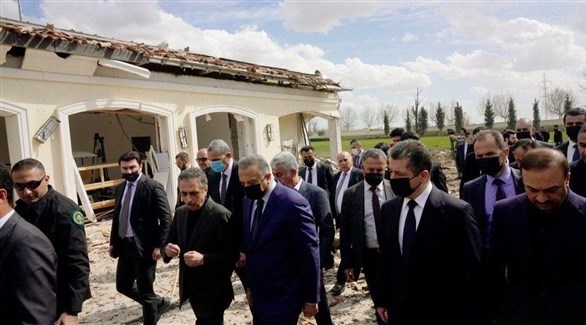 Al-Kazemi said during his visit to Erbil Governorate on Monday and his meeting with Kurdistan Democratic Party Chairman Massoud Barzani, Kurdistan Regional President Nechirvan Barzani and Kurdistan Regional Prime Minister Masrour Barzani: ” Iraq’s position has been officially communicated to respect its sovereignty through diplomatic channels, and that there is security cooperation between the various countries in the region to face common challenges,” according to a statement issued by the press office of the prime minister. Iraqi.

Al-Kazemi called on the Iraqi political forces to unite the word around the sovereignty of Iraq, and that what happened is an incentive to solve the problems and unite ranks in the face of the challenges facing the country.

During the meetings, they discussed the general situation and the repercussions of the missile bombardment against Erbil, emphasizing the rejection of the attack that terrified civilians, exceeding the limits of international laws and norms.

Al-Kazemi led the formation of a committee of the National Security Advisor and various security leaders to report on the aftermath of the bombing and gather facts and evidence.

During his visit, Al-Kazemi inspected the site that was the target of the missile attack, met with the people and listened to a detailed explanation about the site, what it contains and their property.

It should be noted that the Iranian Revolutionary Guards claimed responsibility for the missile strikes, which it said targeted an Israeli center in Erbil.

The Iraqi Foreign Ministry summoned the Iranian ambassador to Iraq and handed him a letter of protest against the attack.