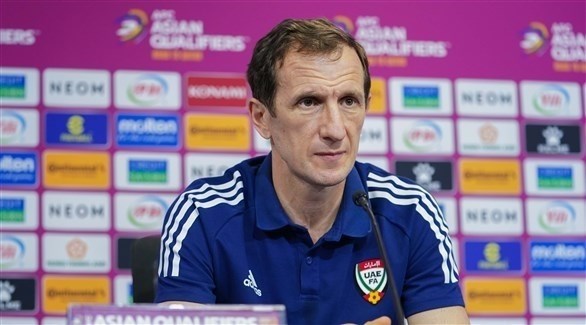 The coach of the United Arab Emirates soccer team, Argentine Rodolfo Arruabarina, expressed his full confidence in the ability of the players to fight on the last day of the qualifiers against their pair from South Korea to maintain their hopes of continuing the qualifying campaign maintaining third place, and qualifying for the knockout “supplement”.

The United Arab Emirates team will host its South Korean counterpart on Tuesday at the Al Maktoum Stadium of the Al Nasr Club in Dubai, in the tenth and final day of the Asian qualifiers for the first qualifying group for the World Cup.

The South Korean team qualified for the 2022 World Cup, accompanied by the Iranian team, from the first group after occupying the top of the group standings with 23 points, and one point behind their Iranian counterpart in second place with 22 points, while than the United Arab Emirates The team is in third place with 9 points, ahead of its Iraqi counterpart in fourth place with 8 points.

Arruabarina said in the press conference to present this match: “It is a fateful match for us, and we still have hope and one last chance in our hands, and we will do everything possible to achieve the victory that guarantees us the third classification. place for the Asian play-off, and although we did not provide the required level in our last game against Iraq, however, I am completely satisfied with the performance of the players during training and total commitment. We are very aware of the difficulty of the matchup due to the strength of the opponent, but we worked hard in the last period and with a lot of concentration in preparing for this match to play it with maximum strength in pursuit of our ambition”.

The UAE national team coach indicated that he really wanted to talk to his players in the last period to find out what mistakes were made, saying: “We are self-critical because we did not present ourselves in the required way. in the last game and we made sure that we are able to fight for our ambition and show ourselves better and face any competitor, whatever they are called”.

Aruabarina considered that psychological pressure in football is natural and changes from one player to another, noting that the team is obliged to direct this pressure towards the public interest in an effort to fight with great concentration and strength against the opponent and take the initiative in the party. .