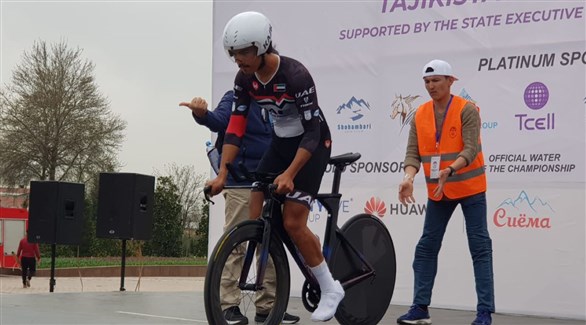 Ahmed Mudon, Kingdom of Bahrain, presented the first medal in the history of his Asian participation in men’s cycling, after winning gold in the U23 individual time trial race, at the Asian Championships currently being held in Dushanbe, the capital of Tajikistan, and whose competitions will continue until next Wednesday, with the participation of 450 Contestants from 25 countries.

Mudon finished the 24 km race in 29:25.502 minutes, with an average speed of 48.9 km per hour, ahead of Uzbek Alexei Fomovsky, who finished second by 37 seconds, who suffered from a health problem before the race, he placed tenth with a time of 34:03.667 minutes.

On the other hand, the Uzbekistan Anna Koskova won the women’s 15 km individual time trial in the women’s category with a time of 20:06.908 minutes, and the Kazakh Daria Kazabay came second with a time of 20:54.601 minutes, and the Vietnamese Tai Bi Young came in third place 21:57.063 minutes Hoda Hussein, our national team player, finished the race in fifth place, in her first participation, with the aim of grazing and gaining experience.

Youssef Mirza, who harbors the UAE’s hopes for the championship, enters the competition mood today, Sunday, and will run the individual time trial, which will see the participation of 10 other runners from Tajikistan, Palestine, Pakistan, Indonesia, Japan, Uzbekistan, Iran, India, Mongolia and Kazakhstan.

- Advertisement -
Share
Facebook
Twitter
Pinterest
WhatsApp
Previous articleAdvances in the case of Abdul Rahman Abu Zahra. He lost consciousness a few days ago
Next article20% Return Per Year – This Simple Trick Has Worked For 50 Years