Agua de Quito denies contamination in one of the treatment plants 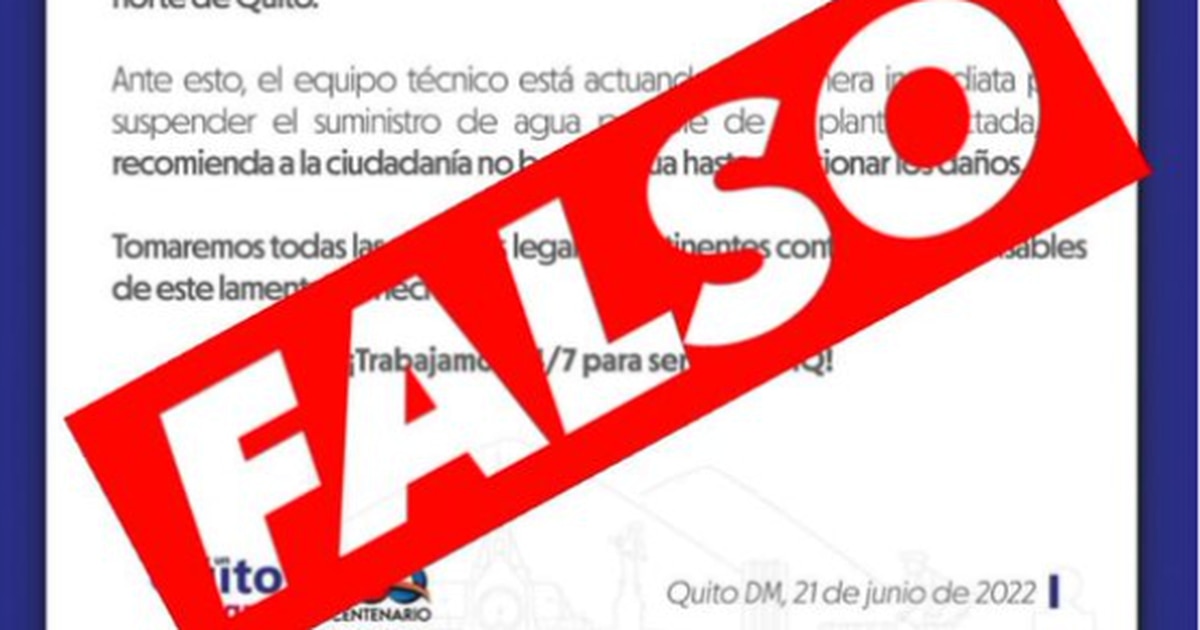 The Quito Metropolitan Drinking Water and Sanitation Public Company (Epmaps) has denied a statement circulating on the networks with which it is intended to generate the alarm.

Therefore, he clarified that there is no “Contamination by a substance in one of the city’s drinking water treatment plants that supplies various sectors of central and northern Quito.”

EPMAPS DENY the malicious message that seeks to pay for the chaos, which has been circulating on social networks and WhatsApp groups. We take the necessary measures to protect the provision and safety of the service of the Metropolitan District of Quito. GET INFORMATION FROM OFFICIAL SOURCES https://t.co/xTKb2DnWyZ

For Epmaps, it is a malicious message that “seeks to pay for chaos” and which has gone viral on social networks and WhatsApp groups.

Then it is stated that they have taken the necessary measures to protect the supply and security of the service of the Metropolitan District of Quito.

Earlier, the Ministry of Interior released a statement confirming that Ambato’s drinking water has been contaminated with burnt oil.

The fact is being investigated by the Attorney General and the National Police. Protesters are believed to be behind this unfortunate criminal act.

“We are reporting that the Tilulum water plant in Ambato has been contaminated with burnt oil,” authorities said. “Based on the initial evidence, it is concluded that a group of protesters entered a collection point 2 km from the factory,” they added.

In this regard, Interior Minister Patricio Carrillo said that together with the authorities, “we will defend Ambato”.

The General Prosecutor’s Office confirmed that it had opened a “preliminary investigation for crimes against water, after the alleged contamination of the water sources that enter the EPEEMAPAA treatment plants”, they said.