After decades, Armenia is ready to open the border with Turkey 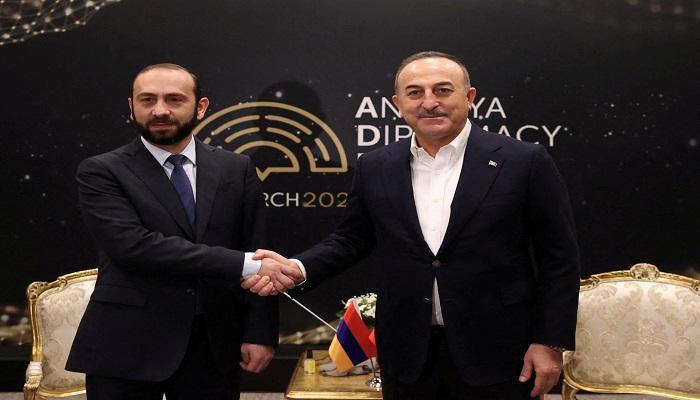 Armenia expressed, on Tuesday, its readiness to establish diplomatic relations and open the border with Turkey.

The RIA news agency quoted Armenian Foreign Minister Ararat Mirzoyan as saying that his country is ready to establish diplomatic relations and open the border with Turkey.

Turkish Foreign Minister Mevlut Cavusoglu said last week that he had held “productive and constructive” talks with Mirzoyan as the two countries sought to mend ties after decades of hostility.

Cavusoglu was speaking with Mirzoyan after they met for half an hour at a diplomatic forum in Antalya.

According to Reuters, Turkey and Armenia are seeking to repair their relations after decades of hostility.

Turkey and Armenia have not had diplomatic or trade ties since the 1990s, but they held talks in January in their first attempt to restore ties since a 2009 peace deal that was never ratified.

In mid-December, Turkey and Armenia appointed their representatives to normalize the relationship between the two countries, which took positive steps in this direction.

Optimism prevails in the positions of Ankara and Yerevan in light of the great international support to bridge the previous differences between the two sides, especially since this will significantly contribute to the stability of the region, to avoid any provocation.

The historic peace agreement between the two countries in 2009 included the reactivation of bilateral contacts and the opening of borders, after decades of closing them.

However, the agreement never came into force and relations remained tense over constant accusations by the Turkish side of being responsible for what Yerevan considers an “Armenian genocide” at the time of the First World War.

Furthermore, historical relations between the two countries have been extremely tense due to Turkey’s political and military support for the Azerbaijani government in the Nagorno-Karabakh conflict.