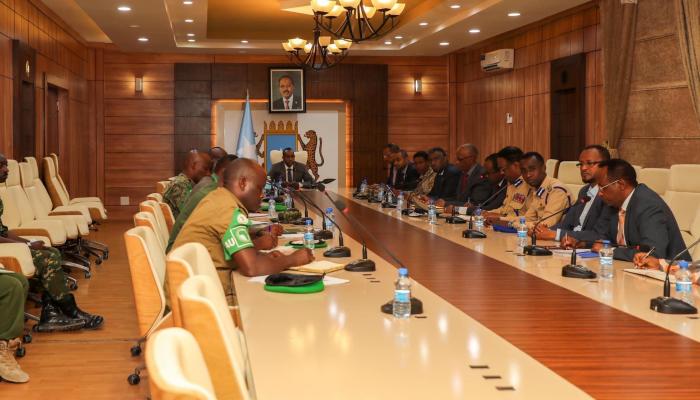 On Sunday, the Somali Prime Minister, Mohamed Hussein Robley, held a security meeting with the leaders of the AMISOM security services, with the participation of the Defense, Justice and Security Ministers.

The meeting discussed recent terrorist attacks, election security and improving public security ahead of the month of Ramadan.

Farhan added: “Robley ordered to reconsider the security plan to protect Mogadishu airport after the attack.”

Farhan said that the meeting touched on the need to strengthen the security of Mogadishu, which is scheduled to complete the general elections, especially the presidency of Parliament and the President of the Republic in the coming months.

For his part, Somali Police Chief General Abdi Hassan Mohamed “Hajjar” said in a press release after the meeting that the meeting discussed strengthening the security of the capital Mogadishu and preparing to ensure the elections to the presidency of the parliament and the president of the republic.

Hajjar added that “Roubli ordered to increase the preparation of the security forces to combat terrorism.”

This meeting comes after a bloody week that Somalia experienced under the weight of Al-Shabaab terrorist attacks, in order to reduce their pace and devise new solutions to stop them.