After being accused of rebellion against Zamalek, Tariq Hamed lies to Mortada Mansour 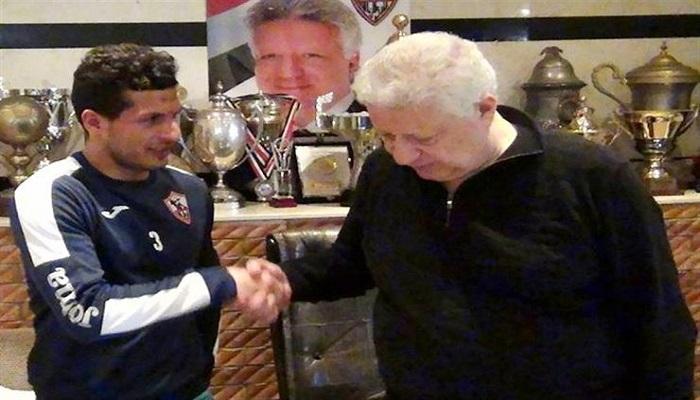 Tariq Hamed, the Egyptian midfielder, Zamalek, responded to Mortada Mansour, president of the club, after he was accused of rebelling against the team during the last period.

Mortada Mansour had attacked Tariq Hamed, during the conference held on Sunday morning to present the new coach, Jesualdo Ferreira, and had confirmed that he would not renew his contract with the player, accusing him of refusing to play the Moroccan Wydad match in the Champions of Africa. He leagues under the pretext of injury, although he was fit to play.

The Egyptian media, Hani Hathout, confirmed, through his program “Al-Match” on the Egyptian channel “Echo Al-Balad”, that he contacted Tariq Hamed in particular to respond to these accusations, since a player denied them. . Zamalek Completely.

Hathout said: “I contacted Tariq Hamed and asked if he had refused to play the Wydad match, so he asked me to contact Mohamed Abul-Ela (Egyptian team doctor) to find out the details of his illness. injury”.

And the Egyptian journalist continued: “Tariq Hamed assured me that the Zamalek doctor will say what the club president said, but the team doctor will clarify it”, and continued: “I am not the one who is unhappy”.

Mortada Mansour had confirmed that he had offered Tariq Hamed an annual salary of 25 million Egyptian pounds, in addition to his arrears, worth 9 million, but he refused.

The Zamalek star denied these statements to Hani Hathout, as the latter said: “Tariq Hamed told me that the president of Zamalek did not offer him a salary of 25 million pounds, and he swore that he did not sign for any team, and he left” . these matters to his agent.

Tariq concluded his remarks to Lahthout: “My whole focus now is to get back into the stadiums again, and I’m completely 100% healthy, and the time of my return is likely to be during the next international break.”

Tariq Hamed has been absent from Zamalek for about 3 months, as his last appearance was during the Arab Contractors match on December 21 in the Egyptian Premier League.