After al-Sistani was abused by one of its leaders, the “Barazani Party” headquarters in Baghdad was burned down. 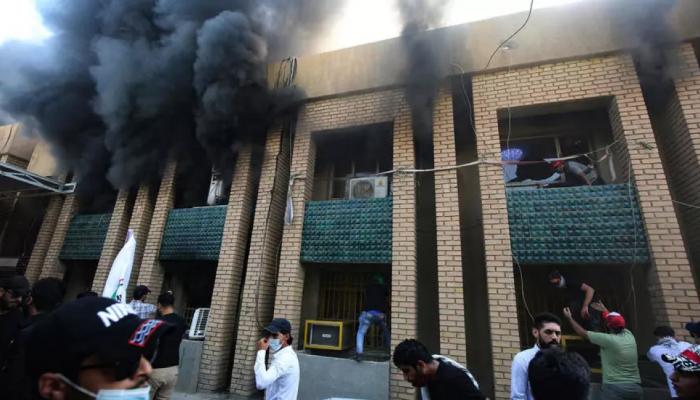 Angry Shiites set fire to the headquarters of the Kurdistan Democratic Party led by Masoud Barzani on Sunday night, in the context of insulting the reference.

The supreme Shia in Iraq, Ali al-Sistani, by one of the party’s leaders.

The attackers surrounded the headquarters of the Kurdistan Democratic Party in central Baghdad, setting fire to it and burning photographs of Kurdish leader Masoud Barzani and his son Masrour Barzani, head of the Kurdistan Regional Government, chanting slogans denouncing the actions they described as shameful against the highest Shiite authority in Iraq.

The Kurdistan Region Ministry of the Interior stressed that “freedom of expression does not mean daring to harm religious and national symbols, and that insulting them, especially the reference position, is not acceptable or tolerable, and that this person represents only he itself, and the position of the Kurdistan Regional Government and the people of Kurdistan is clear and explicit in respecting and glorifying the role of rational reference in Iraq and the Islamic world.

The streets of Baghdad witnessed tight security after dozens of Iraqi Shiites were dispersed in the vicinity of the Kurdistan Democratic Party building on the Rusafa side of Baghdad.

- Advertisement -
Share
Facebook
Twitter
Pinterest
WhatsApp
Previous articleAriana DeBose celebrates being a ‘queer woman of color’ as she wins Oscar
Next articleUSMNT defeats Panama, now they would only miss the World Cup with an even bigger nightmare than 5 years ago