After a live protest on state TV: Russian journalist arrested 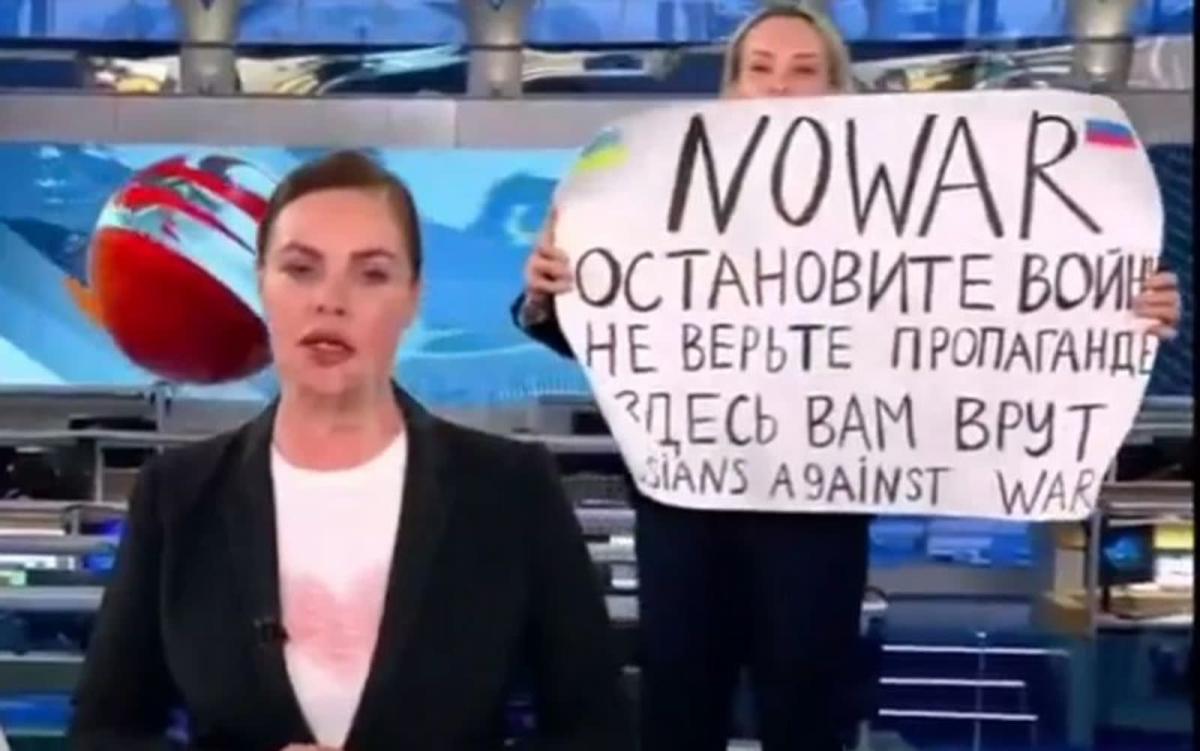 A six-second appearance with great symbolism: a young Russian woman took the opportunity to protest against the war in Ukraine during a news program on the state channel Kanal 1. She was then allegedly arrested.

The appearance of a young woman on Russian state television is going around the world on social networks. She can only be seen for six seconds, but this short amount of time is enough for the message she wants to convey to the public. At first all seemed normal on the 9pm edition of Russian state television’s “Vremja” news program, comparable to the German, albeit politically controlled, “Tagesschau.” But then, in the background, a woman suddenly entered the live feed from the right edge of the image. The banner read in Russian: “Stop the war. Don’t believe the propaganda. They are lying to you here.” In addition, the woman repeatedly shouted: “No to war!”

As the “Süddeutsche Zeitung” reports, the mastermind behind the brave action is apparently Marina Ovsiannikova. She worked for the Kanal 1 television channel and had previously launched her protest on social media. In a video message, she described the war in Ukraine as a “crime” for which only Vladimir Putin is to blame. “Unfortunately, I worked for Channel 1 for several years and spread Kremlin propaganda. I am ashamed of that,” the video says. After the protest, the police reportedly arrested Ovsiannikova.

Although the Russian regime was supposedly able to lock up the former Kanal 1 employee, the action had already begun to spread rapidly around the world. Russian opposition figures shared a recording of the protest on social media, as did artists such as world-famous pianist Igor Levit. The musician tweeted: “What value really means.” German journalist Ina Ruck also published a video of the “surprise on Russian state television” with the reference that Ovsiannikova is now threatened with a long prison term.

The repression of the authorities in this case is another example of how the Russian power apparatus controls the media in Russia and abuses it for its propaganda. Since the beginning of the war, the media in Russia has been prohibited from using the word “war”. Instead, newspapers and television stations can only report on a “special military operation.”

There are also stiff penalties for anti-Kremlin protests on a civilian level, but that doesn’t stop many Russians from taking to the streets and expressing their discontent with the war in the neighboring country. Since the invasion of Ukraine, large protest marches have taken place in numerous Russian cities which, according to the human rights organization Owd-Info, have already resulted in more than 14,000 arrests.