Abengoa, the decline of the symbol of technological development in Andalusia 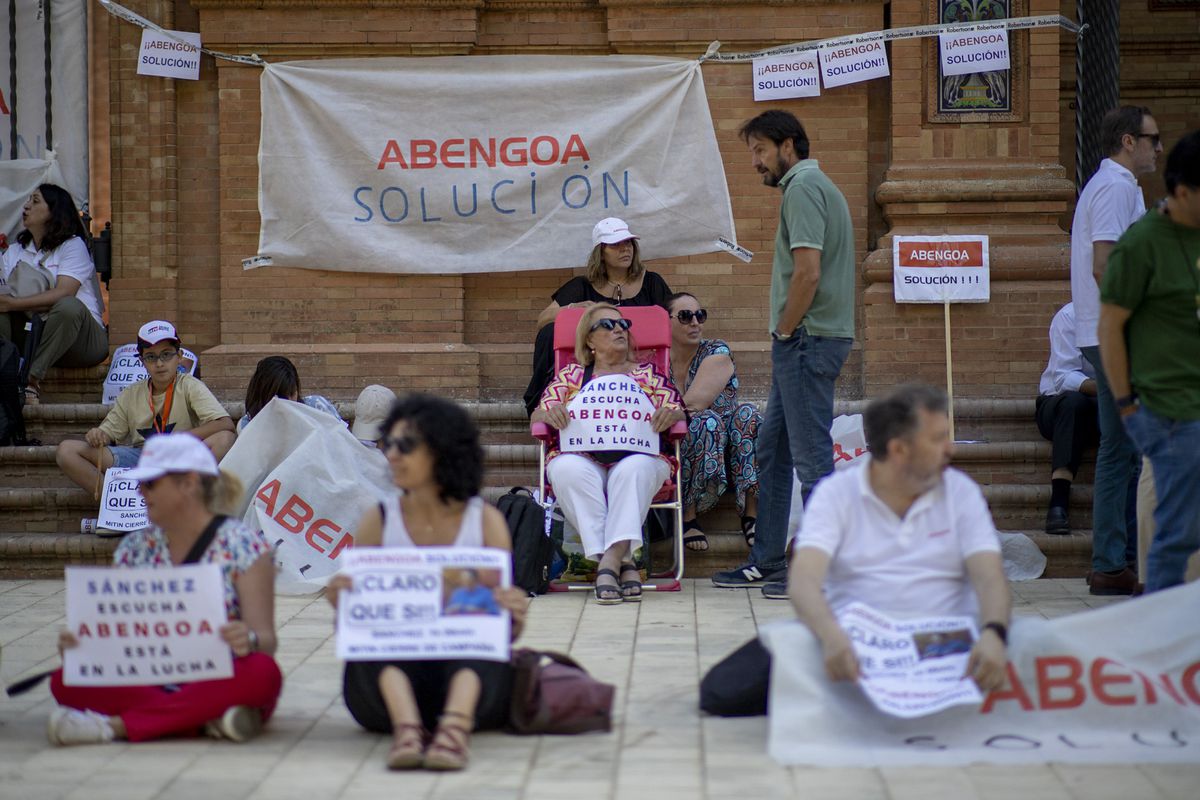 Just over a decade ago, starting work at Abengoa was a dream come true for any freshly graduated engineering student from Andalucia. “Not only was it one of the leaders in the industry, but we had the benchmark of its CEO [Manuel Sánchez-Ortega] who started out as an intern. That was a guarantee for professional projection,” says a former employee who prefers to remain anonymous. Three financial bailouts and bankruptcy later, accompanied by countless reorganizations, this pride remains in the workforce, but it is an insufficient asset to maintain the illusion of a project irretrievably drowning in a debt of 6,000 million euros that does not diminish and manages to accelerate chaos through shareholder wars.

The halo of its solar towers in Sanlúcar la Mayor, the clearest symbol of its strength, now illuminates an uncertain future after the State Industrial Participation Company (SEPI) has rejected the latest aid request in the form of 249 million euros. Clemente Fernández, president of parent company Abengoa SA, believes there is scope to bail out the businesses through the creditor agreement, which is due to be presented on July 1. True, the reality is that the liquidation of the company and its piecemeal sale are becoming increasingly plausible if creditors don’t approve the deal in September.

Abengoa has embodied the symbol of industrial and technological development in Andalusia. It was an anomaly in the community’s business desert. From its creation in 1941 to manufacture five-amp single-phase meters that never made it to the market in post-war Spain, it became a global reference in the field of renewable energy, worthy of the praise of US President Barack Obama it as an example of the “green company” of the future. It was the first Andalusian company to be listed on the Ibex, and just before the nosedive began, it also debuted on the Nasdaq in 2013.

The company continued to grow, reaching 653 companies in 80 countries, but at the cost of borrowing beyond its means to pay for its strong growth in renewable energy in the US, China and India. In 2014, the stock plummeted nearly 50% in two days and Abengoa acknowledged €9,022 million in debt. That was the start of a slide that has claimed more than half of that, alongside three failed bailouts — in 2015, 2018 and 2020 — that have altered the traditional shareholder structure, and a creditor dispute at parent company Abengoa SA.

Its workers, immersed in some of the company’s most acute crises, have begun to raise their voices to defend job stability, which they believe is the last thing the various presidents the company has gone through at his company various restructurings. “Everyone talks about the bonuses, their shares and their benefits, but not about the jobs,” laments Laura Rodríguez, spokeswoman for the works council, who was locked up at SEPI headquarters all week to try to save Abengoa as a last resort force .

She was one of the most visible faces of the various demonstrations that the nearly 2,000 workers of the Seville workforce – the largest in Spain, with around 3,000 workers – have staged in front of their various headquarters and on the streets of the capital of Seville, since the bankruptcy in February 2021 explained in order to make visible the situation of fear and insecurity in which they live. A protest present in the election campaign, in which they took part in various acts of the political parties, the last one during the conclusion of the PSOE campaign, where several collaborators interrupted the speech of the Prime Minister Pedro Sánchez, exclaiming: “Abengoa, solution”. Only the left coalition Por Andalucía referred to the company’s situation in its program.

It is surprising that the claims of a company that has played a leading role in constructing this modern image of Seville and Andalusia beyond sun and sand have found so little social or political support. “The worst thing is that it is becoming public that we are a bottomless pit for subsidies. It’s not us, it was the management,” María Eugenia Alonso, director of the logistics department, told this newspaper. “Since payroll has been made, projects won and even hired in recent years, it seemed like you could trace it back, maybe for this reason too, and because in the end it was always saved,” he explains Manuel Ponce, head of the Andalusian Industry Association UGT.

In addition to rapid international expansion, this lack of empathy has to do with the draconian working conditions imposed by management when it was taken over by Felipe and Javier Benjumea, the founder’s sons. The headquarters in Seville of Palmas Altas is rebranded by its employees as Palmatraz, because they were not allowed to eat out, their shifts, bridges and vacations were controlled and overtime was almost mandatory. Even the management of Abengoa at the time, linked to the city’s elites, did nothing to win the sympathy of the Sevillians, although it promoted the Focus Foundation at the Hospital of the Venerable.

And despite the fact that former ministers of the PSOE and the PP, like Josep Borrell or Josep Piqué, sat on the company’s advisory boards in the company’s most transcendental moments, when it was headed by Felipe Benjumea, the regional and national governments have them also turned their backs on him and accused each other of not fulfilling their obligations. The Board of Directors declined in 2020 to contribute the 20 million euros it had pledged to the company to ensure the viability of the group, claiming that it lacked legal instruments to ensure the legal framework of this operation. A justification influenced by its similarity to the aid to the ERE, one of the battlehorses of the PP in Andalusia against the PSOE. On the board they claim to be aware of the moral dilemma and while acknowledging the undoubted impact on Andalusia’s business culture, there are precedents such as Santana Motor being maintained at the cost of huge injections of public money that the Andalusian administration led to order profiling in the company’s bailout plans maintains sources close to the Commerce Department.

Finance Minister María Jesús Montero alluded to this lack of commitment after the bankruptcy declaration and when asked about the rescue of Abengoa during the Andalusian election campaign. And the board government itself has once again put the ball in play by assuring that it is the state that has “the legal tool” to save Abengoa, a tool the communities lack, he stressed.

“In this process, there was more talk about the back and forth of the partners, the demands for multiple help and the declarations of the politicians, but the essentials are missing, the projects they carry out, where they are competitive, that hardly speaks,” says Francisco Ferraro, President of the Economic Observatory of Andalusia. “We don’t understand why governments saw risk when workers were optimistic about the workload,” explains Ponce.

Despite the bailouts and numbers, Abengoa continues to be a benchmark in its sector, which lacks financial solvency but retains its technique, as evidenced by completed and completed projects in Europe, the Middle East, Africa and South America. “Abengoa invoices more than 1,000 million euros per year, with positive operating profits (Ebitda) and more than 160 million,” recalls the President of Abengoa SA. “Abengoa will be saved, that’s better than any liquidation,” he told EL-LAND. Other directors of the company consulted believe that it is very difficult for creditors to reach an agreement in such a short time and see liquidation as the least of evils.

Abengoa remains a strategic company that creates value and retains talent. “If I went on strike, I wouldn’t find anything like it in Seville or Andalusia,” affirm all the employees interviewed and testify those who got off the ship when they saw that it was very difficult to stay afloat. One of its directors, who asked for anonymity, clarifies the situation with this image: “We are Rafa Nadal, but we play without shoes and with a broken racket.” After SEPI’s refusal to contribute the 249 million, it should be added to the parable that the tennis player also has injured arms or legs.