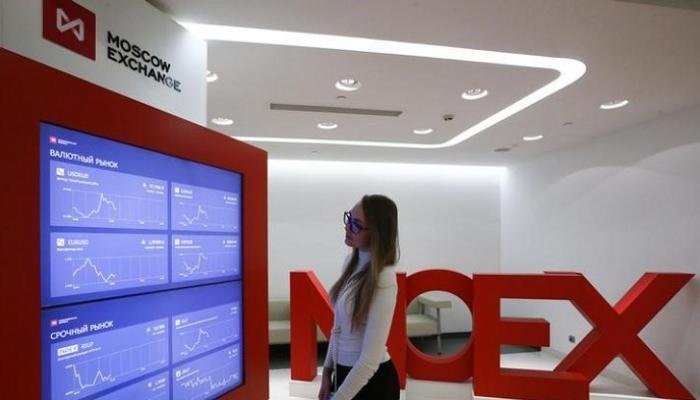 Last February 25, a black day that will be remembered in the history of the Moscow Stock Exchange, when the shares plummeted in an unprecedented way.

The Moscow Stock Exchange concluded the year 2021 with great success with abundant funds and investments until the start of the Russian military operation in Ukraine, which led to its unprecedented collapse and closure.

The Moscow Stock Exchange began its deliberations as usual, on the morning of February 24. But the world changed after Russian forces entered Ukrainian territory at night.

The next day, February 25, the main stock index “Moex” fell by 33%, and almost 190 billion dollars evaporated in one day, and the stock exchange decided to close most of its activities, according to Agence France -Press.

This closure is expected to continue until at least March 21.

The resumption of trading activity is most likely to be in stages, at the earliest next Monday, subject to a green light from the Central Bank.

For her part, Anna Michanova, a 30-year-old graphic specialist, said: “I’m completely frustrated… I don’t know what to do.”

Mishanova started investing 3 years ago after discovering in a financial blog that “I thought it was very important to have financial protection and a good pension, since it is not certain that the state will provide a decent amount of money in old age.”

Mishanova invested, especially during the pandemic, to raise up to 10,000 rubles a month (about $90 today, $150 at the time) in Russian and American stocks.

And he is considered to have “lost his money,” and when the stock market resumes, his losses are estimated at $4,500.

“Until February 24 of this year I was confident that the money kept in the bank or in an investment account would be there and that it would always help me… but I was wrong,” Mishanova said ruefully.

She added: “I realize that I am now completely unprotected… I have no choice but to maintain simple liquidity in foreign currencies.”

Russian stock exchanges and banks have for years sought to attract private investment through new apps, and financial blogs have flourished.

For his part, Alexander Saiganov, head of analysis at Invest Heroes, the investment advisory group, said: “In 2021, we witnessed a huge rush of people to the stock market, especially the Moscow and St. Petersburg stock exchanges. . And this trend started from 2019 when the brokers simplified the procedures in the exchange of investors.

In 2021, the Moscow Stock Exchange was the first par excellence in the country, driven by the post-pandemic recovery.

The exchanges amounted to one million trillion rubles, which is an all-time record, and 6 public offerings, something that has not happened for years.

But since last October, geopolitical turmoil, which was one of the first signs of conflict in Ukraine, has begun to cast a shadow over assets.

At the end of 2021, the Moscow Stock Exchange improved to attract individuals and announced new services in the field of financial technology, especially to facilitate access to novice investors.

The stated goal of the exchange was to reach 25 million people by 2022.

“We are not just a stock exchange, but a technology company,” said Igor Maric, Director of Sales and Development.

Analyst Alexander Saiganov, head of research at Invest Heroes, an investment advisory group, confirmed: “On February 25, there was an unprecedented collapse in everything and everyone.”

And Saiganov seeks to maintain his optimism, saying that “the Russian market will continue”, believing that it will become “a way to preserve savings in the ruble by protecting against inflation”, which exceeded 9% annually last February, and is Se expect it to increase further in the coming months.

Although Yevgeny Malikin, partner of the Russian investment group Aton, advises Russian clients, it would be better for them to invest in “gold, yuan and banknotes (dollars, euros and francs) and when the Moscow Stock Exchange resumes its activity in group shares from exportation”.