A total of 9 unextinguished fires are burning in Galicia covering about 3,700 hectares 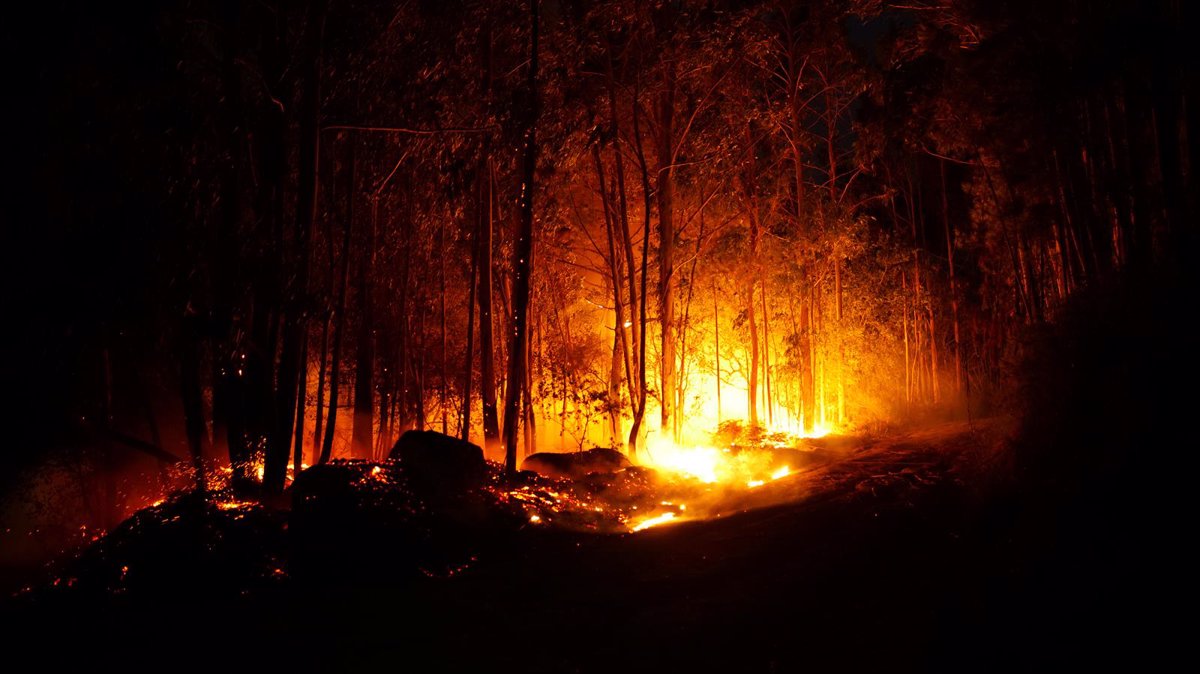 There is a new active fire at Castrelo do Val (Ourense), with multiple sources indicating its intent

A total of nine fires have not yet been extinguished in Galicia as of Monday morning, burning a total of 3,660 hectares.

A new fire has been active in the last few hours, declared on Sunday evening in the municipality of Castrelo do Val (Ourense), municipality of Campobecerros, burning about 40 hectares. According to Xunta, it began in multiple sources so “everything indicates it was intentional”.

Meanwhile, the Laza fire is still active, which according to preliminary estimates has resulted in a destroyed area of ​​2,100 hectares after merging with the Chandrexa de Queixa fire.

Also active in the province of Ourense are the fires in the municipalities of Rios and Oímbra, whose devastated area increases to 80 and 70 hectares respectively. Rural environment claims that they are developing “favorably” towards their stabilization.

Likewise, in the province of Ourense, the Casaio fires in Carballeda de Valdeorras, which burned around 440 hectares, remain under control; that of Astureses in Boborás, where about 120 hectares burned; that of San Cosmede de Cusanca in O Irixo, where about 680 hectares burned; and that of the municipality of A Gudiña, which began in Pentes and burned 90 hectares.

In addition, the fire in Boiro, in the region of O Barbanza (A Coruña), was extinguished around 8 p.m. last Friday, more than a week after it broke out in the municipality of Cures. The hectares devastated by this forest fire amount to 2,200 hectares, of which 607 were forested mountains and the remaining 1,593 were bare.

The Boiro fire, which is the largest of the fires registered so far in August in the Galician municipality in relation to the area affected – although it is closely followed by the Laza fire – caused the activation of the alarm by proximity to residential areas, forced evictions and Spread to the municipalities of A Pobra do Caramiñal and Ribeira.

Among those wiped out in August are those of Verín (600 hectares), Caldas de Reis (450 hectares), Ponte Caldelas (380 hectares), A Mezquita (224 hectares) and Maceda (120 hectares) as the following major extensions.

Another of the most significant extinctions was that of the municipality of Monfero (A Coruña), parish of Queixeiro, since it endangered the Fragas do Eume Natural Reserve, although it was wiped out after burning only 0.01 hectares of wooded forest. . Also in Vilariño de Conso, 0.21 hectares burned, which affected the Parque Natural do Invernadeiro.

All this after a second half of July in which about 34,000 hectares burned in Galicia, with the fires of O Courel (11,100 hectares) and Valdeorras (10,500) being the largest in the history of the Galician municipality.

Previous articleFree instead of 3.99 euros: Apple offers classic games for iPhone, iPad and Apple TV
Next articleOppo: the manufacturer announces ColorOS 13 based on Android 13 on August 18