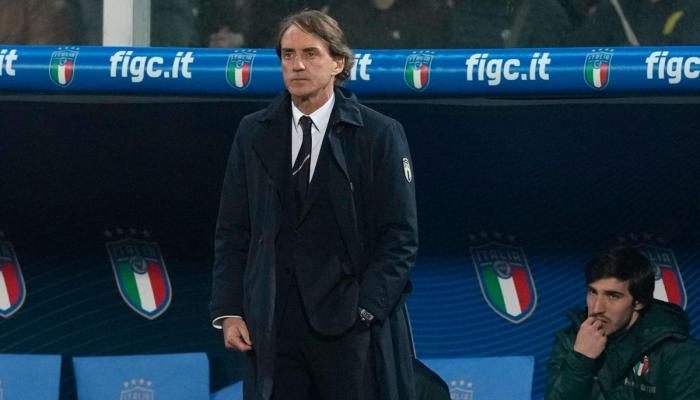 The Italian team is going through one of the worst nightmares in its history, after the resounding fall in the 2022 World Cup qualifiers.

The Italians lost the play-off match in the European qualifiers at the hands of North Macedonia with a fatal unanswered goal, to confirm the absence of the European champions from the World Cup for the second time in a row, after Russia 2018.

Several reports claimed that the Italian Football Association is in the process of disassociating itself from coach Roberto Mancini after Turkey’s friendly match next Tuesday, but the “Football Italia” website denied the matter entirely.

The source said that Gabriele Gravina, president of the Italian Federation, wants Mancini to continue as technical director of the “Azzurre” during the next stage, to build a new generation.

He explained that “Gravena is always working for the future, and that is why he wants the continuation of Mancini (57 years old) and will work to convince him not to resign.”

The main objective of Mancini’s stay is to supervise the construction of a new generation for the Italian team, which will recover its glories from the 2026 World Cup, which will be played in the United States, Mexico and Canada.

Italy’s plan is based on analyzing what has happened in the last 8 months, specifically since it won the European Cup of Nations “Euro 2020” last summer.

Gravina is expected to have many talks with Mancini in the coming days, specifically after the end of the Turkey match.

According to the source, the Italian team is likely to appear with new blood during the hiatus next June, when they face Argentina, England, Hungary and Germany in a friendly.

The source concluded the report by pointing out that the closest thing to Mancini himself is to continue leading the technical direction of his country.