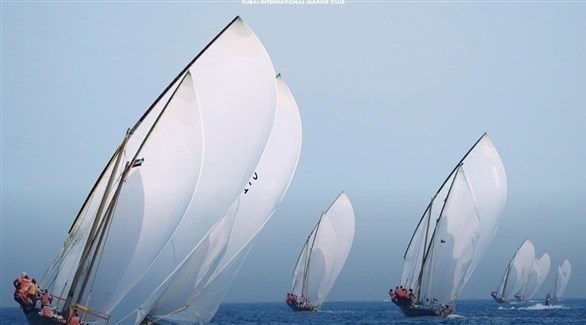 Dubai International Marine Club announced the opening of registrations to participate in the second round of the 60-foot Dubai Sailing Ship Championship, organized by the club at noon next Sunday on the shores of Dubai, as part of the calendar of the 2021-Sports season. nautical 2022.

The 60-foot Dubai Local Sailing Championships includes three seasons, which kicked off last February with the start of the first round regatta, which was very successful, while it will continue next Sunday with the second rounds, while the conclusion will be held during the month. next May with the most beautiful and most expensive event Al Gaffal Race No. 31 for long distances from Sir Bu Nair Island to the beaches of Dubai.

The Dubai International Marine Club has notified the owners and Al Nawakhatha of the date of the next regatta and the schedule of the event, which includes the opening of registrations from today, Monday, and continues every day until noon on Friday, the date of registration closing. door and announcing the list of participating boats Conditions that include the ownership of the boat registered and approved by the responsible authorities, and the annexation of all the documents for the participants and the tug boat as well.

The Dubai International Marine Club headquarters recently witnessed a thoughtful meeting between Mohammed Abdullah Hareb, Executive Director of the Dubai International Marine Club, and the Advisory Committee for Heritage Boats and Sailing Ships, which was recently formed by decision of the Board of Directors. and includes an elite group of pioneers participating in local races, providing support to the Sports Committee and the proposals that will make the season a success
The meeting was attended by the advisory committee: Khalifa Muhair Saeed Al Mazrouei Ahmed Obaid Al Suwaidi and Khalifa Abed Thani Al Marri. Mohammed Abdullah Hareb welcomed them, wishing them success in carrying out their tasks. Many racing related topics and issues were discussed and ways to ensure the success of all programs and activities during the upcoming term were discussed to serve the public interest and lead to the success of all racing.

Muhammad Abdullah Hareb praised the great and tangible cooperation that the executive management of the club and the organizing committees find from the nawakhas and sailors who participate in the local heritage regattas, expressing his great happiness at the response and great understanding on their part. of the various circumstances. in front of the committees when organizing the race, pointing out that this cooperation was the result of everyone coming to hello and aman

Mohammed Abdullah Hareb said that the club’s activities are still going strong at the end of March and continue in great diversity, stressing that preparations are in full swing for the success of the remaining community and competitive activities, including the second round race of the 60th Dubai. The Local Sailing Ahead Championship is scheduled for next Sunday.

He explained that the Dubai International Marine Sports Club is following up on all the reports on the state of the sea and the expected wind speeds in the coming days during the regatta -on Sunday- in order to make the great event a success, which will serve as a starting point. (rehearsal) before arriving at the closing wedding of the 2021-2022 marine sports season. The locksmith who celebrates this time by blowing out candle number 31.

The Executive Director of the Dubai International Marine Sports Club called on all owners and volunteers who wish to participate to quickly complete all related procedures through the electronic portal before the registration deadline next Friday, praising the great cooperation shown by the participants in the first round. career, which concluded with great success last February.

to congratulate
Khalifa Muhair Al Mazrouei, Chairman of the Advisory Committee, praised the great and pioneering role of the Dubai International Marine Club and the great support of His Excellency Ahmed Saeed bin Meshar, Chairman of the Board and members of the Board of Directors and the Sports Committee. , emphasizing that this matter will be reflected positively during the races through cooperation among all to reach the finish line and culminate in the success of the events.