A new episode of extreme heat will coincide with August 6, the hottest day of the year, according to eltiempo.es 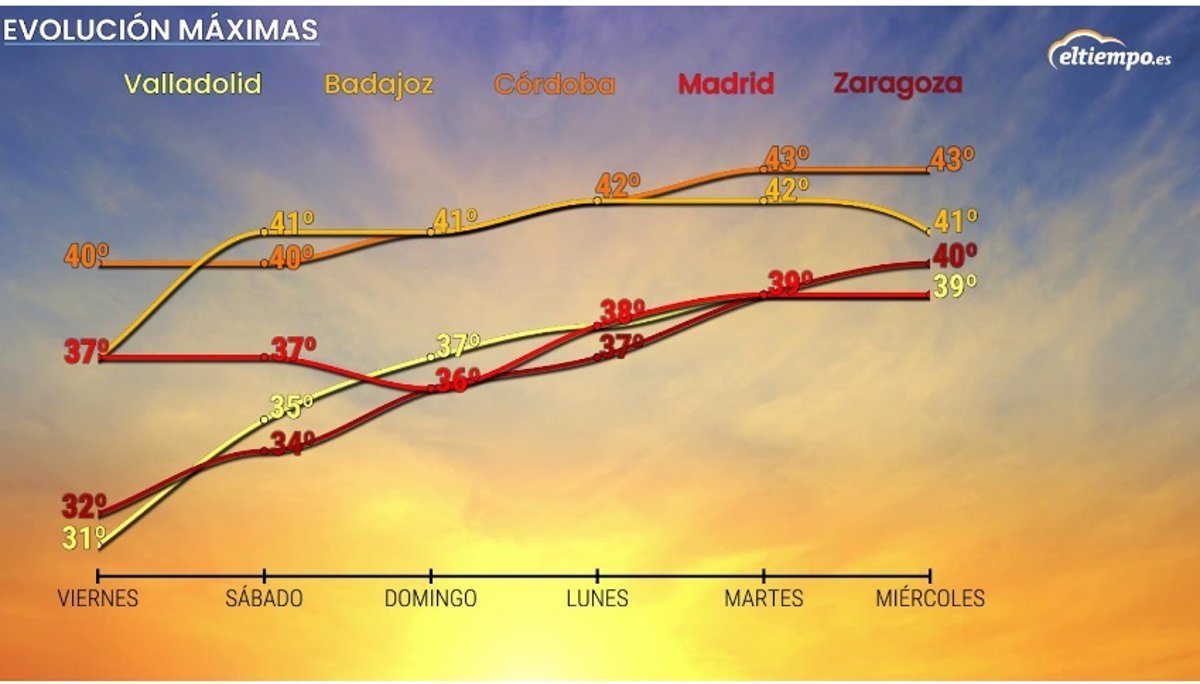 A new episode of extreme heat will coincide with August 6, the hottest day of the year, according to weather portal eltiempo.es, which predicts that temperatures will soar to over 38ºC in many areas of the country during the first week of August.

eltiempo.es warns that from this last Saturday of July, temperatures will be particularly high in the south-west, with thermometers touching 40ºC, an increase that will continue on Sunday and extend to other areas, since 40 ° C are exceeded in Andalusia and Extremadura, up to 42ºC punctually.

In the rest of the country, 35°C is exceeded throughout the southern half of the peninsula, in the Ebro Valley and in most of Castilla y León. The softest values ​​are expected on the Cantabrian coast and the Mediterranean coasts.

On Monday the thermal rise will continue and in the valleys of the Tagus, Guadiana and Guadalquivir it could exceed 42°C in time. Temperatures generally reach 36ºC in Castilla y León, Castilla-La Mancha, Madrid and throughout the Ebro Valley.

Looking ahead to Tuesday and Wednesday, thermometers will continue to rise, exceeding 40C in Extremadura, much of Andalusia and the Tagus and Guadiana valleys in Castile-La Mancha. In addition, the thermometer could soon rise to 44 degrees in the areas around Seville and Córdoba.

From there, thermometers could remain at similar levels at least until Saturday, August 6, when they could drop slightly in the west of the peninsula.

Anyway, in each province and season, the day and the average temperature vary. In Seville, the maximum is 29.8°C on August 6, but in Vigo the highest average temperature is on July 14 at 21°C. Therefore, August is usually warmer in coastal areas, with the exception of the Galician, Asturian and Cantabrian coasts, where the warmest day is usually mid-July.

eltiempo.es adds that on August 10, 2012 there was an average temperature that reached almost 37.9 degrees. As for the nights, that of August 7th is considered the hottest: on this early morning, the statistical average of minimum temperatures in Spain is around 18ºC.

However, the significant increase across the country comes from Tuesday, August 2nd, when tropical nights could appear in almost all areas of the country and could not drop below 20ºC in cities like Santander, Valladolid or Badajoz.

In addition, in some areas the equatorial nights could return, that is, those where the thermometers do not drop below 25ºC throughout the night, as would be the case in Madrid, Jaén or Barcelona, ​​where they could remain closer to 26ºC than 25ºC.

Previous articleBundestag wants 150,000 euros from AfD in donation scandal
Next articlePushing back refugees: Baerbock wants to clarify allegations against Frontex