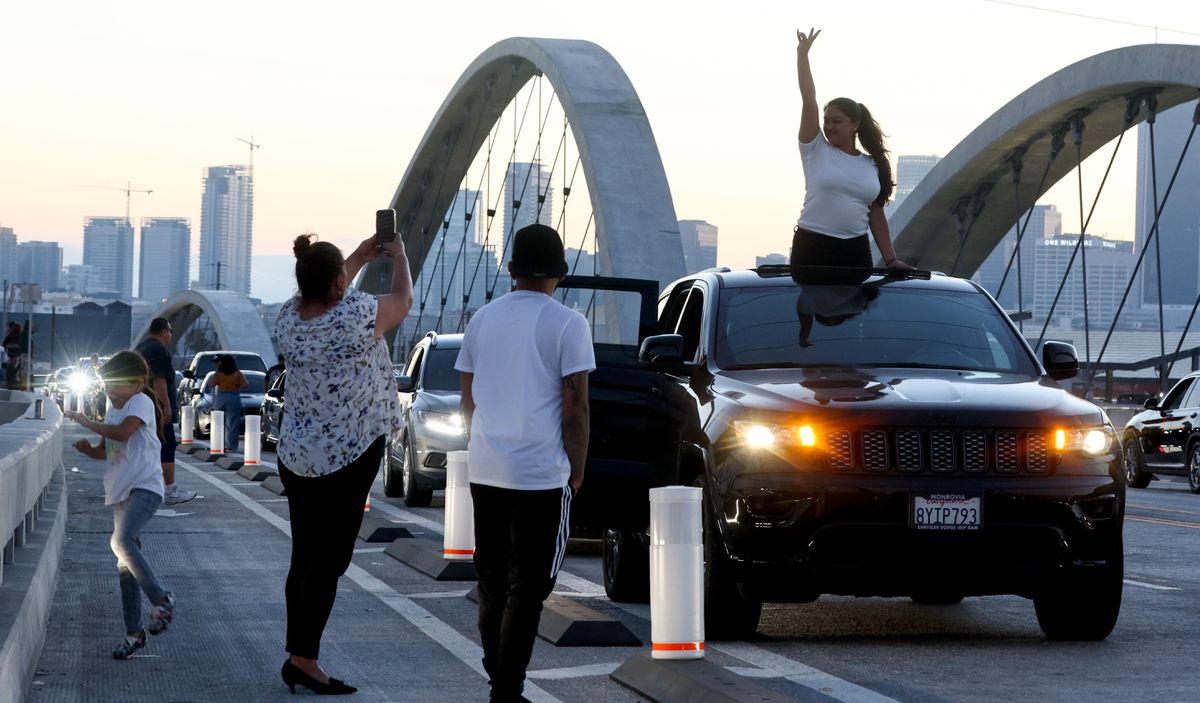 On July 10, thousands of people attended the dedication of the Sixth Street Viaduct, a bridge connecting downtown Los Angeles to the historic Boyle Heights neighborhood to the east. That Sunday, hundreds of neighbors came on foot, on bicycles, roller skates, and skateboards, took photos, and walked the mile-long sidewalk in amazement. The new plant took six years to build and cost $588 million. After two years of pandemic-enforced delay, it has finally opened. First for the pleasure of pedestrians between eleven in the morning and four in the afternoon. Hours later, the bridge would be claimed by drivers, the real beneficiaries in a county with more than eight million cars. The premiere marked the immediate future of the viaduct that caused a sensation. In the last few weeks it has attracted streams of influencers and car racers Fast and Furious and daredevils who have set out to scale the concrete arches of the work designed by architect Michael Maltzan.

The chaos has caused numerous headaches for the Los Angeles Police Department, who have closed the bridge to traffic several times since it opened. There have been five closures on this road since last Thursday. The last was on Tuesday at nine o’clock at night. “The Sixth Street Bridge will be closed until further notice due to illegal activities and public safety concerns,” police said on social media. The reopening was announced in another message, arriving just hours later. The closure was maintained overnight, the preferred time for auto racers who have chosen the viaduct as the setting for stunt-driving and acceleration competitions. Boyle Heights residents describe how the squeak of burning tires in the early hours of the morning has become a commonplace noise. The tire marks on the sidewalk remain as a sign of baptism.

At the weekend, 57 tickets were issued on the bridge and the vehicles of six offenders were confiscated. Not only cars have made this new attraction their own. The viaduct has also left surreal images, such as that of a man sitting in a barber chair having his hair cut in the middle of the street. On Monday, a 16-year-old boy was arrested for climbing one of the arches that support the structure. He’s not the only one who has climbed them, as evidenced by dozens of posts on Instagram.

Cameras are no strangers to this Los Angeles location, one of ten bridges over a dry river. The channel crossing below will be familiar to almost everyone. Some of Hollywood’s most famous scenes were filmed there. It was the place where John Travolta drives his car at the height of races Fat (1978). The Terminator rode his Harley-Davidson there for James Cameron to stage one of the most famous movie chases. Arnold Schwarzenegger returned to the stage a few years later the last great herofrom 1993. The player You will be able to recognize it by the popular ones Grand Theft Auto.

On today’s episode of Issues on the new 6th Street Bridge… haircuts in the middle of the bridge! LAPD says they’re stepping up patrols, no sign of them at the Bridge Barbershop. #CBSLA pic.twitter.com/qtKSgI2pUT

“We are calling for some plastic or light barriers that can prevent people from crossing lanes,” Police Commissioner Michael Moore said this week. The city has already announced that it will install speed bumps to discourage adrenaline-pumping motorists. Authorities have also called for surveillance cameras and sensors to be installed to reduce the number of incidents. These measures worked for another of the great attractions in the region, the emblematic Hollywood sign, which had also suffered from the creativity of graffiti artists and fans of social networking challenges.

Los Angeles Times has suggested in an editorial that everything that has happened in the last few weeks is an opportunity to rethink the city’s infrastructure and public spaces. “The temporary closures could be made permanent, making the viaduct a common area for walking, cycling or just meeting up on weekends or afternoons,” says the paper, which even suggests usage ideas, such as a concert venue with a market local products.

The city’s mayor, Eric Garcetti, said during the dedication that the new bridge is “a love letter to the city.” Affection was returned with madness. In part because the ashes of a long relationship were left on the premises. In February 2016, demolition began on the old bridge that connected downtown to East Los Angeles, an area with a 94% Latino population.

The last day of the old bridge, which has existed since 1932, was also characterized by disorder. A peaceful party atmosphere prevailed, but the authorities judged that riots could break out. In the evening, the police riot squad was deployed to disperse the crowd that had gathered to say goodbye. Many came back then in vintage cars and in the famous low riders, tuned collectible cars designed to surprise and be respected in the neighborhood. With the return of the viaduct, this past was remembered. A caravan of these vehicles passed through the building on the first day. On the weekends it is still a popular meeting place for fans of these cars.