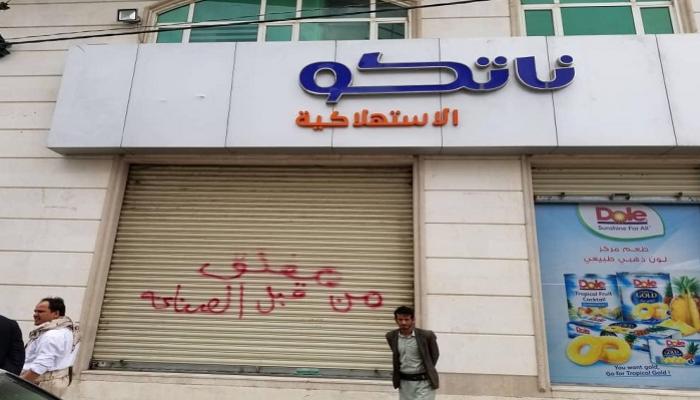 The Houthi militia continues its brutal war against the private sector in north and west Yemen, after launching a new campaign to shut down and blackmail food companies.

The Houthi crackdown, which affected food producing and importing companies in Sana’a, doubled the burden of life in the coup areas, as well as widening the scope of the destruction of the country’s fragile economy, following the repercussions of the militia war, which is entering its eighth consecutive year.

Food company workers told “Al-Ain Al-Akhbariya” that an armed Houthi campaign led by the so-called Minister of Industry in the unrecognized coup government, Abdel Wahab Al-Durra, has already shut down suddenly and selectively, on Tuesday , many groups of food production and import in Sanaa.

The Houthi militias went on to justify the closure procedures by violating the prices approved by trading companies and claiming to “curb price imbalances”, but Yemeni activists responded massively on social media to the Houthi campaign, calling it “a new blackmail”. . for merchants.”

The activists circulated an image showing the closure by Houthi militias of the “Natco Consumer Company”, one of the companies of Hayel Saeed Anam, Yemen’s largest business group, and wrote on their official website “Closed by the industry” affiliated with the coup plotters.

As well as the “Natco” company and the “Hael Saeed Anam” group, amid continuous blackmail from the Houthi militias, which reached the point of raiding the group’s Tadhamon Bank last year.

Blackmail and closure of 12 companies

The Houthi militia admitted to shutting down 12 food production and import businesses in Amanat Al-Asimah alone, alleging that they did not comply with the terms and price lists set by the militias in violation, including refunding pre-impact prices. of the war crisis in Russia and Ukraine.

He also threatened to continue his frantic campaign and target commercial companies, from food producers and importers, to agents and wholesalers, to retailers, in a clear sign of a new financial blackmail cover put in place by the militias to exacerbate the Yemeni crisis. in Ramadan. .

Terrorist militias impose illegal price lists that do not comply with the laws of conducting business. Illegal customs duties, levies and the increase in the dollar exchange rate double the cost of goods arriving in non-liberated areas, while coup plotters set prices below the full cost of goods arriving.

The Yemeni economic expert, Wahid Al-Fawdaei, considered that the closure measures of the Houthis “enter the context of the extortion practiced by the Houthi militias against commercial companies in the cities under their control, in order to make money.”

Al-Fawdaei wrote on his Facebook account, followed by Al-Ain Al-Akhbariya, that the rise in commodity prices is the result of them being affected by international economic changes, one of which is the rise in the dollar exchange rate. calling on the Houthi militias to concentrate and study the changes that are taking place in the world, indicating that raising prices is not a single step by these companies.

The economic expert explained that the Houthi militias have set the price of the US dollar at 600 Yemeni riyals in their control areas, which is a false price, which they use to achieve financial gains by blackmailing institutions and commercial companies, in addition to deceiving the residents of their neighborhoods that they are fulfilling their duty to protect them from price increases.

Houthi immunity to the black market

The economic situation of the country is affected by international changes at the level of transportation, shipping and insurance costs, and the increase in the prices of petroleum derivatives, which is one of the most important causes of production costs, according to Al-Fawdaei.

He pointed out that the prices of oil derivatives in the areas controlled by the Houthis change according to global changes, but they were not affected by the closure and confiscation procedures, especially the black market, since it is the monopoly of the militias. terrorists, and one of their most important financial resources to finance their war against the Yemeni people.

The oil derivatives markets, especially the black ones, are one of the most important financial arteries for the Houthis, and are home to the largest money laundering operations that take place in the country.

According to the Yemeni economic expert, commercial companies are already distressed by the measures taken by the Houthi militia, including the imposition of indirect taxes and additional customs duties on imports of goods from ports and harbors not under their control.

He stressed that the measures taken by the Houthis increase the burden of life in the areas under the control of the militias and are aimed at widening the scope of the destruction of the Yemeni economy.

It should be noted that last month, the Houthi militia seized the property and money of Yemeni businessman Ahmed al-Kbous after allegations of evading payment of rental fees for real estate he uses in his business, as well as breaking into his house and break into his house. family members, including children and women.