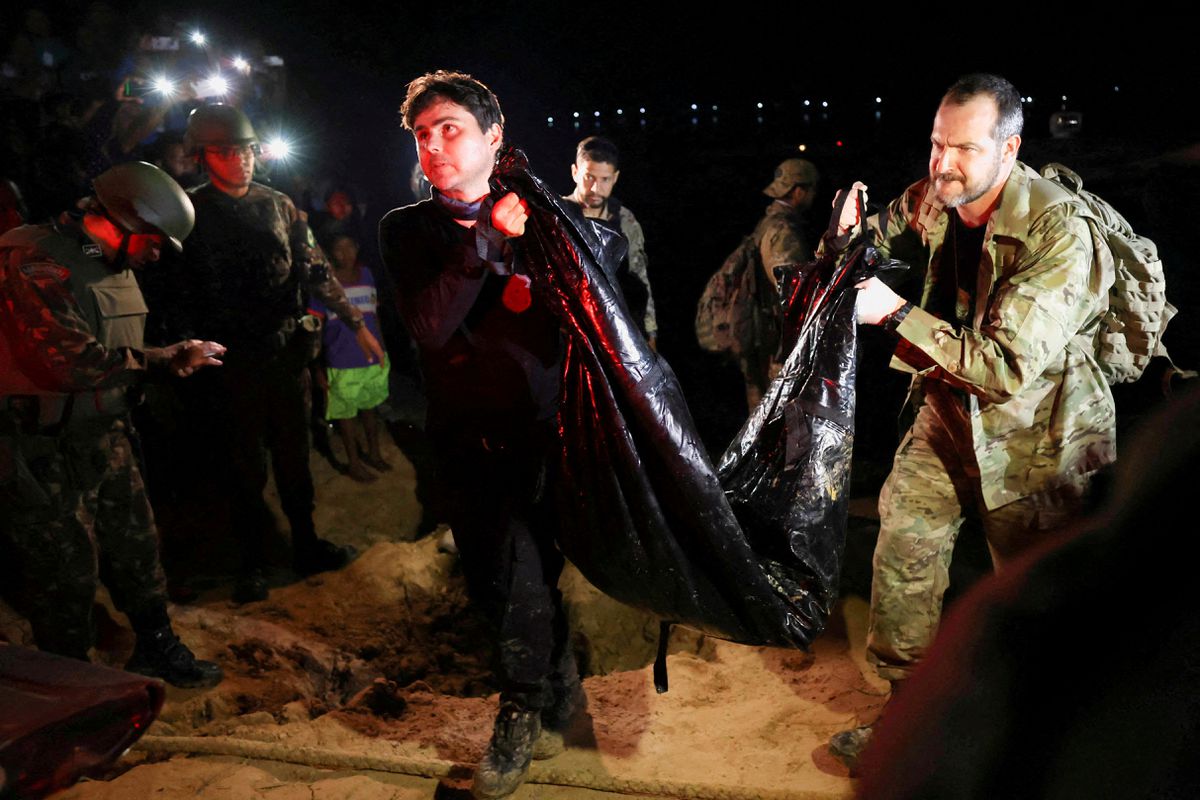 The discovery this Wednesday of two bodies buried in a very inaccessible area in the jungle of the Brazilian Amazon ended the agony of the relatives and colleagues of indigenous researcher Bruno Pereira, 41 years old and father of three children. and British journalist Dom Phillips, 57. Police were only able to locate the location where the bodies were hidden after a poacher, the first to be arrested after the disappearance, confessed to murdering them, burying them and burying their boat dumped in the Itaquaí River. It was the feared outcome after an ordeal of 11 days of intensive searches in the stretch of river where they disappeared on June 5. The violent deaths of the two in the Yavarí Valley – an area the size of Panama home to at least 10 uncontacted tribal peoples – is much more than an event. “The tragedy exposes the Amazon as a lawless country sponsored by Bolsonaro,” he said Thursday the editorial office From the newspaper Folha de S. Paulo.

The 11 Days of Torment

Wednesday June 15th. The indigenous trackers, mobilized hours after the trail of the indigenous and the journalist disappeared, complete the 11th day of the search in a jungle area crossed by a meandering river. Security forces joined the day after the disappearance was reported. The survey focuses on an area of ​​10 square kilometers where the river makes several meanders, which is relatively close to the city of Atalaia do Norte by Amazonian standards. After one of those arrested, the fisherman Amarildo da Costa, 41, alias NakedShe will confess the crime, one of the two arrested leads the police to the ditch where they were buried. Hours later, at a press conference, the police announce that two bodies have been found and offer initial details of the circumstances of the disappearance.

Ten days before, Sunday June 5th. Reporter Phillips, a regular employee of Guardian, and the Indigenista, who worked for a decade at Funai, the official organization for the protection of Indigenous people, returned to Atalaia do Norte after a trip upriver. They had sailed to Lake Jaburu so the first could question the local patrol officers who run a surveillance post to prevent invasions of Yavarí land. They are colleagues of the men who searched for them for eleven days. Belong Univaja, an association that has taken over the defense their country in the face of the withdrawal of government agencies. Pereira works with them. They are last seen by the residents of a village called São Gabriel.

All of this is happening in the best-preserved Amazon region, 1,100 kilometers west of Manaus, on the borders of Peru and Colombia, it’s the front line of a war. An area where fishermen and poachers, illegal loggers and miners and drug trafficking collide. The indigenous expert helped Univaja members document their attacks on invasions to activate authorities in hopes they would apply the law. A task in which they combine the knowledge inherited from their ancestors with the latest technology.

According to the police report, Pelado, armed with a shotgun, chases the boat of the British and the Brazilian at full speed on the way back. The fisherman, a known poacher, opens fire. He boards with four other people, a confrontation ensues and they neutralize the duo. The indigenista was repeatedly threatened and was armed; he, along with Phillips and the Univaja team, had been threatened by Pelado and other poachers the day before to disappear. The attackers sink the duo’s engine in the river.

When the Brit and the Brazilian don’t arrive at the scheduled time, the alarm goes off at the Univaja club. The indigenous patrols, who knows read in the jungle, whether someone passed a place, how long ago it was, how many there were or whether there was violence, you start searching. Inconclusive. There are no signs of an accident either. Pereira has made several expeditions into the jungle, he knows how to survive in this hostile environment.

Days before the event, Pereira provided police and the State Ministry with detailed information about a criminal network allegedly involved in fishing and poaching. And information gathered from local indigenous people has also been used to confiscate illegal catches in recent months.

Monday, 6.6. The indigenous people report the disappearance to the authorities. The first police officers join the search. The government announces the sending of funds that will take time to materialize on the ground. Relatives and colleagues of the two disappeared harass them because time is short. They criticize that they don’t use airplanes. The Ministry of Defense announced in a note that it would join, but was awaiting orders from above. Outrage is spreading among colleagues at the government’s slow response.

Meanwhile, the attackers push the remains of the disappeared at one point three kilometers into the jungle and bury them. They load their boat with sandbags and sink it, according to the police version, based on Pelado’s confession. Tests must confirm their identity and the cause of death.

Tuesday June 7th. The authorities use a search operation with divers, police officers and soldiers in two boats and a jet ski. Relatives denounce that planes are needed. The police initiate an investigation. The colleagues of both are mobilized to launch a national and international campaign calling: Where are Bruno and Dom?

Phillips’ wife Alessandra Sampaio implores authorities in a video: “Even if I don’t find the love of my life alive, she must be found. Please intensify this search.” Pereira’s companion Beatriz Matos emphasizes in a note: “Every minute counts, every unnavigated stretch of river and jungle could be this (the place) where they are waiting for rescue.”

President Jair Bolsonaro, who sees NGOs, indigenous people and the press as real enemies, disqualifies the two professional veterans: “Two people on a boat, in such a completely wild region, is an adventure that is not recommended. Everything can happen. You could have had an accident or been executed.”

Wednesday June 8th. Several people are questioned and the fisherman known as Pelado is arrested after a witness says he saw the car chase on the 5th. (The two lawyers handling her defense are magistrates, according to the Brazilian press, which is not so strange in the most isolated of Brazil but draws attention. As the news spreads, they both leave the client).

Thursday June 9th. Bolsonaro and Biden are holding their first bilateral meeting in parallel with the Summit of the Americas being held in Los Angeles. That’s how far the campaign goes, urging the authorities to step up tracking operations.

An indigenous source who knows this remote region of the Yavarí Valley well tells this newspaper: “Everything suggests that it wasn’t an accident, but that they were ambushed. A boat doesn’t just disappear with seven empty gas drums. You and all evidence are gone.”

Saturday June 11th. Pelado’s family affirms that he was tortured. “They wanted him to confess, but he’s innocent,” Oseney da Costa, brother of the first inmate who days later becomes the second inmate, told the Associated Press.

Sunday June 12th. First concrete news in the case. Univaja tribal trackers find a backpack attached to a tree in a flooded area near where they were last seen. Among the belongings are Pereira’s health card, both of their boots, some flip-flops and clothes.

Monday 13 June. The deputy at the Embassy of Brazil in London, Roberto Doring, tells the Phillips brothers that he has news that he wants to share with them. The diplomat’s information came from “an official Brazilian contact,” the family later said. “He told us they found two bodies, but (since it was early in Brazil) the identification process hadn’t been done.” Phillips’ wife made the find public. Many national and international media outlets, including this newspaper, published the apparent information, which the Brazilian police later denied in a note stating: “The information that the bodies were found is not original.” The ambassador later apologized to the Phillipses.

President Bolsonaro refers to the case again. This time in a strikingly clear form. “Evidence suggests they did something evil to them, as human entrails have already been found floating in the river and are in Brasilia to identify their DNA.”

Wednesday June 15th. The head of the Amazonas Federal Police confirms the whereabouts of two bodies and offers some details of Pelado’s confession in a late-night appearance in Manaus.

“Now we can take her home and say goodbye to her with love,” says Phillips’ wife. And he adds: “Today the search for justice also begins.”

Marta Calvo’s mother: “I want my daughter back, she stole her from me”

The Umbrella Academy Season 4: Here are the plans for the Netflix series sequel

Conclusion of the G7: “We want a Marshall plan for Ukraine”